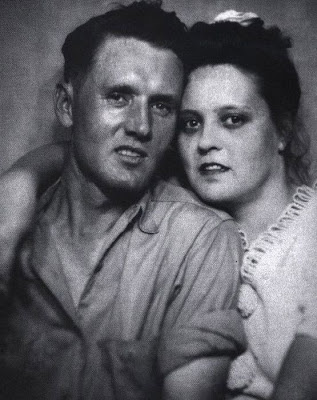 Just another picture from a photo album, somebodies parents.  People I never knew and probably won't ever know.  But, to someone they were very important, for without them, their life wouldn't exist.  Family is valuable and although sometimes our families can be a bit embarrassing, nevertheless, they are our history, our legacy; in short, us.  Jesus had a family too; listed in a stylistic manner in the book of Matthew and also in the book of Luke.  Frankly, I like Luke's list better because it somehow seems more human, and therefore more like that of us all...
WEB: Luke Chapter 3


Jas 2:1 My brothers, don't hold the faith of our Lord Jesus Christ of glory with partiality.
Jas 2:2 For if a man with a gold ring, in fine clothing, comes into your synagogue, and a poor man in filthy clothing also comes in;
Jas 2:3 and you pay special attention to him who wears the fine clothing, and say, "Sit here in a good place;" and you tell the poor man, "Stand there," or "Sit by my footstool;"
Jas 2:4 haven't you shown partiality among yourselves, and become judges with evil thoughts?
Jas 2:5 Listen, my beloved brothers. Didn't God choose those who are poor in this world to be rich in faith, and heirs of the Kingdom which he promised to those who love him?
Jas 2:6 But you have dishonored the poor man. Don't the rich oppress you, and personally drag you before the courts?
Jas 2:7 Don't they blaspheme the honorable name by which you are called?
Jas 2:8 However, if you fulfill the royal law, according to the Scripture, "You shall love your neighbor as yourself," you do well.
Jas 2:9 But if you show partiality, you commit sin, being convicted by the law as transgressors.
Jas 2:10 For whoever keeps the whole law, and yet stumbles in one point, he has become guilty of all.
Jas 2:11 For he who said, "Do not commit adultery," also said, "Do not commit murder." Now if you do not commit adultery, but murder, you have become a transgressor of the law.
Jas 2:12 So speak, and so do, as men who are to be judged by a law of freedom.
Jas 2:13 For judgment is without mercy to him who has shown no mercy. Mercy triumphs over judgment.
Jas 2:14 What good is it, my brothers, if a man says he has faith, but has no works? Can faith save him?
Jas 2:15 And if a brother or sister is naked and in lack of daily food,
Jas 2:16 and one of you tells them, "Go in peace, be warmed and filled;" and yet you didn't give them the things the body needs, what good is it?
Jas 2:17 Even so faith, if it has no works, is dead in itself.
Jas 2:18 Yes, a man will say, "You have faith, and I have works." Show me your faith without works, and I by my works will show you my faith.
Jas 2:19 You believe that God is one. You do well. The demons also believe, and shudder.
Jas 2:20 But do you want to know, vain man, that faith apart from works is dead?
Jas 2:21 Wasn't Abraham our father justified by works, in that he offered up Isaac his son on the altar?
Jas 2:22 You see that faith worked with his works, and by works faith was perfected;
Jas 2:23 and the Scripture was fulfilled which says, "Abraham believed God, and it was accounted to him as righteousness;" and he was called the friend of God.
Jas 2:24 You see then that by works, a man is justified, and not only by faith.
Jas 2:25 In like manner wasn't Rahab the prostitute also justified by works, in that she received the messengers, and sent them out another way?
Jas 2:26 For as the body apart from the spirit is dead, even so faith apart from works is dead.

This is a day of good news by Mark Copeland