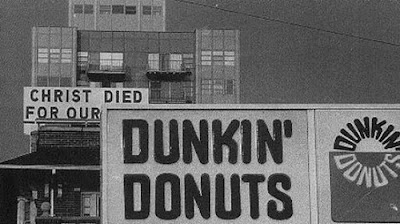 I don't like this picture. Don't get me wrong; I know why Christ died and I do love DUNKIN' DONUTS, but the two should never be put together. Why? Because they have nothing to do with each other, that is why. In a way, though, I can see how it would be "funny". It does bring up a serious subject though; that of our ability to perceive and respond to the word of God. How do we understand it?
Matthew 13:1-23 (WEB)
1) On that day Jesus went out of the house, and sat by the seaside.
2) Great multitudes gathered to him, so that he entered into a boat, and sat, and all the multitude stood on the beach.
3) He spoke to them many things in parables, saying, “Behold, a farmer went out to sow.
4) As he sowed, some seeds fell by the roadside, and the birds came and devoured them.
5) Others fell on rocky ground, where they didn’t have much soil, and immediately they sprang up, because they had no depth of earth.
6) When the sun had risen, they were scorched. Because they had no root, they withered away.
7) Others fell among thorns. The thorns grew up and choked them.
8) Others fell on good soil, and yielded fruit: some one hundred times as much, some sixty, and some thirty.
9) He who has ears to hear, let him hear.”
10) The disciples came, and said to him, “Why do you speak to them in parables?”
11) He answered them, “To you it is given to know the mysteries of the Kingdom of Heaven, but it is not given to them.
12) For whoever has, to him will be given, and he will have abundance, but whoever doesn’t have, from him will be taken away even that which he has.
13) Therefore I speak to them in parables, because seeing they don’t see, and hearing, they don’t hear, neither do they understand.
14) In them the prophecy of Isaiah is fulfilled, which says, ‘By hearing you will hear, and will in no way understand; Seeing you will see, and will in no way perceive:
15) for this people’s heart has grown callous, their ears are dull of hearing, they have closed their eyes; or else perhaps they might perceive with their eyes, hear with their ears, understand with their heart, and should turn again; and I would heal them.’
16) “But blessed are your eyes, for they see; and your ears, for they hear.
17) For most certainly I tell you that many prophets and righteous men desired to see the things which you see, and didn’t see them; and to hear the things which you hear, and didn’t hear them.
18) “Hear, then, the parable of the farmer.
19) When anyone hears the word of the Kingdom, and doesn’t understand it, the evil one comes, and snatches away that which has been sown in his heart. This is what was sown by the roadside.
20) What was sown on the rocky places, this is he who hears the word, and immediately with joy receives it;
21) yet he has no root in himself, but endures for a while. When oppression or persecution arises because of the word, immediately he stumbles.
22) What was sown among the thorns, this is he who hears the word, but the cares of this age and the deceitfulness of riches choke the word, and he becomes unfruitful.
23) What was sown on the good ground, this is he who hears the word, and understands it, who most certainly bears fruit, and brings forth, some one hundred times as much, some sixty, and some thirty.”
(Matthew 13:1-23, WEB)

We are bombarded with an overflow of information each day. The television, radio, cell phones and internet all vie for our attention. Not only that, there are the normal functions of talking with others, driving, making purchases in stores, eating and many other such things that we do each day. When these overlap... watch out, something has got to give. Its no wonder there is a trend towards aloofness in our society; we are just too busy. Its time we started to slow down and when we do, the overlap will stop and life will be a little bit more clear. Why Christ died will be thought of by itsself and so will be Dunkin Donuts. Which is better for you.... the answer to that is a slam dunk... and I don't mean in your coffee, either.
Email ThisBlogThis!Share to TwitterShare to FacebookShare to Pinterest
Newer Posts Older Posts Home
Subscribe to: Posts (Atom)