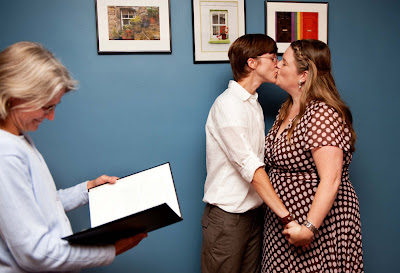 Looks harmless enough, doesn't it? However, this recent picture is of the first gay marriage in Vermont. Who cares? God cares, that's who. Read this passage from Romans and ask yourself the question again: "Who cares"?


Romans 1:18-32 WEB (R)
(18) For the wrath of God is revealed from heaven against all ungodliness and unrighteousness of men, who suppress the truth in unrighteousness,
(19) because that which is known of God is revealed in them, for God revealed it to them.
(20) For the invisible things of him since the creation of the world are clearly seen, being perceived through the things that are made, even his everlasting power and divinity; that they may be without excuse.
(21) Because, knowing God, they didn't glorify him as God, neither gave thanks, but became vain in their reasoning, and their senseless heart was darkened.
(22) Professing themselves to be wise, they became fools,
(23) and traded the glory of the incorruptible God for the likeness of an image of corruptible man, and of birds, and four-footed animals, and creeping things.
(24) Therefore God also gave them up in the lusts of their hearts to uncleanness, that their bodies should be dishonored among themselves,
(25) who exchanged the truth of God for a lie, and worshiped and served the creature rather than the Creator, who is blessed forever. Amen.
(26) For this reason, God gave them up to vile passions. For their women changed the natural function into that which is against nature.
(27) Likewise also the men, leaving the natural function of the woman, burned in their lust toward one another, men doing what is inappropriate with men, and receiving in themselves the due penalty of their error.
(28) Even as they refused to have God in their knowledge, God gave them up to a reprobate mind, to do those things which are not fitting;
(29) being filled with all unrighteousness, sexual immorality, wickedness, covetousness, malice; full of envy, murder, strife, deceit, evil habits, secret slanderers,
(30) backbiters, hateful to God, insolent, haughty, boastful, inventors of evil things, disobedient to parents,
(31) without understanding, covenant breakers, without natural affection, unforgiving, unmerciful;
(32) who, knowing the ordinance of God, that those who practice such things are worthy of death, not only do the same, but also approve of those who practice them.


Just a "little" sin? However, if you look closely, you will notice something. The passage is sort of knit together. What I mean is that the person who can worship a false god also has no problem in doing what they want to do in spite of what God says. This really is shown by the list of sins in 29-31 because it is all one sentence in the original. The deviant is not JUST deviant, but is all those other things as well. Frankly, this is NOT one of my favorite passages of Scripture, BUT, it is truth. Unpopular in todays society, yes, but the Word of God is true, even though even person on the face of the Earth might disagree. Remember, the last time that happened there was a flood.
Email ThisBlogThis!Share to TwitterShare to FacebookShare to Pinterest
Newer Posts Older Posts Home
Subscribe to: Posts (Atom)