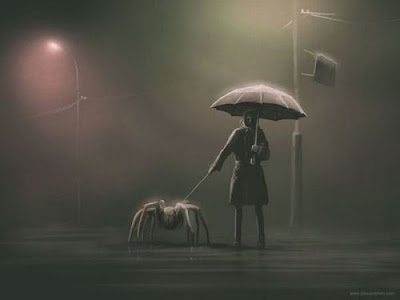 I have heard of walking your dog, but walking your spider. Creepy! This "little" creature looks to be about 2 feet tall and it sure does send shivers up my spine. Perhaps this isn't a walking duty; maybe its along for security and if so, its got my vote. Where does a 2 foot spider walk? Answer: anywhere it wants.... However, don't let the size of this thing get to you... remember, its on a leash. Size doesn't always matter; take this little episode from the book of numbers for example.
Numbers 13:17-33 (WEB)
17) Moses sent them to spy out the land of Canaan, and said to them, “Go up this way by the South, and go up into the hill country:
18) and see the land, what it is; and the people who dwell therein, whether they are strong or weak, whether they are few or many;
19) and what the land is that they dwell in, whether it is good or bad; and what cities they are that they dwell in, whether in camps, or in strongholds;
20) and what the land is, whether it is fat or lean, whether there is wood therein, or not. Be courageous, and bring of the fruit of the land. Now the time was the time of the first-ripe grapes.”
21) So they went up, and spied out the land from the wilderness of Zin to Rehob, to the entrance of Hamath.
22) They went up by the South, and came to Hebron; and Ahiman, Sheshai, and Talmai, the children of Anak, were there. (Now Hebron was built seven years before Zoan in Egypt.)
23) They came to the valley of Eshcol, and cut down from there a branch with one cluster of grapes, and they bore it on a staff between two. They also brought some of the pomegranates and figs.
24) That place was called the valley of Eshcol, because of the cluster which the children of Israel cut down from there.
25) They returned from spying out the land at the end of forty days.
26) They went and came to Moses, and to Aaron, and to all the congregation of the children of Israel, to the wilderness of Paran, to Kadesh; and brought back word to them, and to all the congregation, and showed them the fruit of the land.
27) They told him, and said, “We came to the land where you sent us; and surely it flows with milk and honey; and this is its fruit.
28) However the people who dwell in the land are strong, and the cities are fortified and very large. Moreover, we saw the children of Anak there.
29) Amalek dwells in the land of the South: and the Hittite, and the Jebusite, and the Amorite, dwell in the hill country; and the Canaanite dwells by the sea, and along by the side of the Jordan.”
30) Caleb stilled the people before Moses, and said, “Let us go up at once, and possess it; for we are well able to overcome it.”
31) But the men who went up with him said, “We aren’t able to go up against the people; for they are stronger than we.”
32) They brought up an evil report of the land which they had spied out to the children of Israel, saying, “The land, through which we have gone to spy it out, is a land that eats up its inhabitants; and all the people who we saw in it are men of great stature.
33) There we saw the Nephilim, the sons of Anak, who come of the Nephilim: and we were in our own sight as grasshoppers, and so we were in their sight.”
(Numbers 13:17-33, WEB)

What about verse 33? Does the name Goliath sound familiar? Most of the spies were afraid, but Joshua and Caleb were not. This tells me that size does not matter when seen through the eyes of faith. Joshua and Caleb were commended for their faith, but the others died, never seeing the promised land. Faith has a way of overcoming all obstacles, of enduring until there is a successful solution to whatever the problem might be. As for the 2 foot spider... anyone have a 5 gallon spray can of industrial strength raid handy? I might need it!!
Email ThisBlogThis!Share to TwitterShare to FacebookShare to Pinterest
Newer Posts Older Posts Home
Subscribe to: Posts (Atom)