A beautiful car that I would never buy!!! 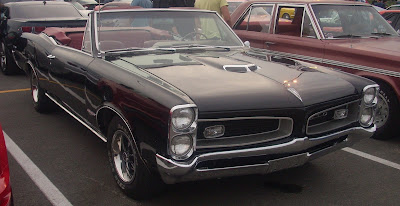 Today's post is a difficult one for me to write.  Difficult because it brings back a painful memory of something that actually happened.  I hope that those of you who know me will understand and perhaps we will become even better friends.  It was 1964 and I was 15 years old.  Too young to have a car, I had to walk where I wanted to go.  Linda and I had been going out for a few months and had argued over something stupid, but I knew that a phone call was not enough, so I had to see her in person.  So, I left the house about dust and started walking.  It wasn't long before I reached route 40 in  Melrose and soon after a car like the one in the picture stopped to pick me up.  The driver was the biggest, most muscular man I had ever seen!!!  After I got in, he peeled rubber and down the road we went.  It wasn't long before I knew something was wrong; he kept looking at me in a way I had never seen before and it made me nervous.  Then, he put his hand on the automatic stick shift and before I knew it he rubbed the side of my leg.  As he did, he said: "Its a nice night, want to go for a swim?".  At this point I was scared out of my wits because I remembered there had been a murder in Melrose not that long ago and that the deceased had been sexually abused before being killed.  My mind raced and I said:"I can't... just got out of the hospital".  "What was wrong" was his reply.  I then proceeded to tell him about my imaginary bout with pneumonia.  "Are you OK, NOW"? was his reply.  "Pretty much" I answered "but the additional drugs they put me on for my other problem are nasty".  "Extra drugs... for what"?  Syphilis, I said, and at that he moved his hand away from my leg and from then on kept both hands on the steering wheel.  He let me out at Kardas Road past the school and I never saw him again... which is fine by me.  I lied to save my life and it worked, but I am not proud of it.  Then again, it was a long time ago and The God of Heaven has been working on my heart for many decades now.  Which is why I have sincerely tried to be honest with people in all things.  Why?  Because I have wanted to please God in all things, just like someone else I have begun to know...
World English Bible: Galatians Chapter 1

[1] Paul, an apostle (not from men, neither through man, but through Jesus Christ, and God the Father, who raised him from the dead), [2] and all the brothers who are with me, to the assemblies of Galatia: [3] Grace to you and peace from God the Father, and our Lord Jesus Christ, [4] who gave himself for our sins, that he might deliver us out of this present evil age, according to the will of our God and Father— [5] to whom be the glory forever and ever. Amen.

[6] I marvel that you are so quickly deserting him who called you in the grace of Christ to a different “good news”; [7] and there isn’t another “good news.” Only there are some who trouble you, and want to pervert the Good News of Christ. [8] But even though we, or an angel from heaven, should preach to you any “good news” other than that which we preached to you, let him be cursed. [9] As we have said before, so I now say again: if any man preaches to you any “good news” other than that which you received, let him be cursed. [10] For am I now seeking the favor of men, or of God? Or am I striving to please men? For if I were still pleasing men, I wouldn’t be a servant of Christ. [11] But I make known to you, brothers, concerning the Good News which was preached by me, that it is not according to man. [12] For neither did I receive it from man, nor was I taught it, but it came to me through revelation of Jesus Christ. [13] For you have heard of my way of living in time past in the Jews’ religion, how that beyond measure I persecuted the assembly of God, and ravaged it. [14] I advanced in the Jews’ religion beyond many of my own age among my countrymen, being more exceedingly zealous for the traditions of my fathers. [15] But when it was the good pleasure of God, who separated me from my mother’s womb, and called me through his grace, [16] to reveal his Son in me, that I might preach him among the Gentiles, I didn’t immediately confer with flesh and blood, [17] nor did I go up to Jerusalem to those who were apostles before me, but I went away into Arabia. Then I returned to Damascus. [18] Then after three years I went up to Jerusalem to visit Peter, and stayed with him fifteen days. [19] But of the other apostles I saw no one, except James, the Lord’s brother. [20] Now about the things which I write to you, behold, before God, I’m not lying. [21] Then I came to the regions of Syria and Cilicia. [22] I was still unknown by face to the assemblies of Judea which were in Christ, [23] but they only heard: “He who once persecuted us now preaches the faith that he once tried to destroy.” [24] And they glorified God in me.
Paul had a "history".  He had tried to destroy the church and he was not at proud of it.  However, Jesus reached out to him; Saul changed and became known as Paul.  More than just a name change; he changed his ways!!!  True conversion is like that; you really, really change!!!  Linda and I married and were living in our home Valley Falls about ten years after the hitchhiking incident and had a small get-together in our home (I really don't remember why).  I asked everyone to be seated because I had an announcement.  Then I proceeded to tell everyone of my desire to preach the Gospel.  The laughter was humiliating!!!  A few believed; most did not.  No one laughs about it today.  People CAN CHANGE!!! And, if I can, you can!!!!!  Just be honest with yourself and others; seek God and his will for your life and everything will be FINE.  As Paul would say:"Now about the things which I write to you, behold, before God, I’m not lying." Coming face to face with truth and then doing something about it changes things!!!  Remember, as long as you draw breath you can have HOPE.  HOPE has a name; its Jesus... you might want to remember that...
Email ThisBlogThis!Share to TwitterShare to FacebookShare to Pinterest


Jas 3:1 Let not many of you be teachers, my brothers, knowing that we will receive heavier judgment.
Jas 3:2 For in many things we all stumble. If anyone doesn't stumble in word, the same is a perfect man, able to bridle the whole body also.
Jas 3:3 Indeed, we put bits into the horses' mouths so that they may obey us, and we guide their whole body.
Jas 3:4 Behold, the ships also, though they are so big and are driven by fierce winds, are yet guided by a very small rudder, wherever the pilot desires.
Jas 3:5 So the tongue is also a little member, and boasts great things. See how a small fire can spread to a large forest!
Jas 3:6 And the tongue is a fire. The world of iniquity among our members is the tongue, which defiles the whole body, and sets on fire the course of nature, and is set on fire by Gehenna.
Jas 3:7 For every kind of animal, bird, creeping thing, and thing in the sea, is tamed, and has been tamed by mankind.
Jas 3:8 But nobody can tame the tongue. It is a restless evil, full of deadly poison.
Jas 3:9 With it we bless our God and Father, and with it we curse men, who are made in the image of God.
Jas 3:10 Out of the same mouth comes forth blessing and cursing. My brothers, these things ought not to be so.
Jas 3:11 Does a spring send out from the same opening fresh and bitter water?
Jas 3:12 Can a fig tree, my brothers, yield olives, or a vine figs? Thus no spring yields both salt water and fresh water.
Jas 3:13 Who is wise and understanding among you? Let him show by his good conduct that his deeds are done in gentleness of wisdom.
Jas 3:14 But if you have bitter jealousy and selfish ambition in your heart, don't boast and don't lie against the truth.
Jas 3:15 This wisdom is not that which comes down from above, but is earthly, sensual, and demonic.
Jas 3:16 For where jealousy and selfish ambition are, there is confusion and every evil deed.
Jas 3:17 But the wisdom that is from above is first pure, then peaceful, gentle, reasonable, full of mercy and good fruits, without partiality, and without hypocrisy.
Jas 3:18 Now the fruit of righteousness is sown in peace by those who make peace.

The Samaritan religion by Mark Copeland

http://executableoutlines.com/text/2ki17_24.htm
His lessons are worth reading...Gary
Email ThisBlogThis!Share to TwitterShare to FacebookShare to Pinterest
Newer Posts Older Posts Home
Subscribe to: Posts (Atom)