hard to perceive, easy to understand 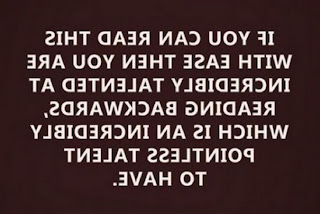 At first glance, I thought this was Russian, then I looked a little closer.  This is English, but right to left and BACKWARD.  Frankly, I was a little surprised that I could read it, but it wasn't easy.  I do know someone for whom it would be easy however.  Brian is his name and he could read things upside down or sideways with ease.  Like reading this, he was talented in many ways, especially with understanding group dynamics and predicting what people would do BEFORE they would do it.  We all have our own gifts, but I must confess that the one I admire the most (which barely comes in first over the many contenders) is intelligence.  So, I thought of Sergius Paulus once again...
LITV: Acts Chapter 13

[7] He was with the proconsul, Sergius Paulus, an intelligent man. This one having called Barnabas and Saul to him, he sought to hear the Word of God. [8] But Elymas, the conjurer (for so his name is translated) withstood them, seeking to turn the proconsul away from the faith. [9] But Saul, who is also Paul, being filled with the Holy Spirit, and looking intently on him, [10] he said, O son of the Devil, full of all guile and of all cunning, enemy of all righteousness, will you not stop perverting the right ways of the Lord? [11] And now, behold, the hand of the Lord is on you, and you will be blind, not seeing the sun until a time. And instantly a mist and darkness fell on him, and going about he sought some to lead him by the hand. [12] Then seeing the thing happening, the proconsul believed, being astounded at the doctrine of the Lord.
It is fashionable today for those in Academia to look down on Christianity and portray Christians as being less than gifted with intelligence.  No, that's not quite right... they think Christians are stupid.  They are wrong!!!  On the contrary; being able to perceive the value of eternity over this temporal existence is a true sign of understanding.  Consider Sergius Paulus for example.  He was a proconsul.  Now, that was a position of great importance in the Roman empire; you had to have something on-the-ball to be one.  He did.  I know of no where else in the Bible where someone is called intelligent, not even the great counselor Ahithaphel from the old testament. When the proconsel saw the power given to Paul, he believed.  And not just the power, but the doctrine as well!!!  Not all of us may be blessed with great intellect or the ability to read from unusual perspectives, but we can understand truth and that is what is really necessary.
Remember this passage from the book of Corinthians:
WEB: I Corinthians Chapter 1

[26] For you see your calling, brothers, that not many are wise according to the flesh, not many mighty, and not many noble; [27] but God chose the foolish things of the world that he might put to shame those who are wise. God chose the weak things of the world, that he might put to shame the things that are strong; [28] and God chose the lowly things of the world, and the things that are despised, and the things that are not, that he might bring to nothing the things that are: [29] that no flesh should boast before God. [30] But of him, you are in Christ Jesus, who was made to us wisdom from God, and righteousness and sanctification, and redemption: [31] that, according as it is written, “He who boasts, let him boast in the Lord.”
Rejoice in whatever gifts God has given you and be happy!!  Even if you are seemingly "very ordinary", you ALWAYS HAVE THE LORD TO BOAST ABOUT and that is more important than any mere "gift"!!!!!
Email ThisBlogThis!Share to TwitterShare to FacebookShare to Pinterest

Jan. 25
Genesis 25
Gen 25:1 Abraham took another wife, and her name was Keturah.
Gen 25:2 She bore him Zimran, Jokshan, Medan, Midian, Ishbak, and Shuah.
Gen 25:3 Jokshan became the father of Sheba, and Dedan. The sons of Dedan were Asshurim, Letushim, and Leummim.
Gen 25:4 The sons of Midian: Ephah, Epher, Hanoch, Abida, and Eldaah. All these were the children of Keturah.
Gen 25:5 Abraham gave all that he had to Isaac,
Gen 25:6 but to the sons of Abraham's concubines, Abraham gave gifts. He sent them away from Isaac his son, while he yet lived, eastward, to the east country.
Gen 25:7 These are the days of the years of Abraham's life which he lived: one hundred seventy-five years.
Gen 25:8 Abraham gave up the spirit, and died in a good old age, an old man, and full of years, and was gathered to his people.
Gen 25:9 Isaac and Ishmael, his sons, buried him in the cave of Machpelah, in the field of Ephron, the son of Zohar the Hittite, which is before Mamre,
Gen 25:10 the field which Abraham purchased of the children of Heth. Abraham was buried there with Sarah, his wife.
Gen 25:11 It happened after the death of Abraham that God blessed Isaac, his son. Isaac lived by Beer Lahai Roi.
Gen 25:12 Now this is the history of the generations of Ishmael, Abraham's son, whom Hagar the Egyptian, Sarah's handmaid, bore to Abraham.
Gen 25:13 These are the names of the sons of Ishmael, by their names, according to the order of their birth: the firstborn of Ishmael, Nebaioth, then Kedar, Adbeel, Mibsam,
Gen 25:14 Mishma, Dumah, Massa,
Gen 25:15 Hadad, Tema, Jetur, Naphish, and Kedemah.
Gen 25:16 These are the sons of Ishmael, and these are their names, by their villages, and by their encampments: twelve princes, according to their nations.
Gen 25:17 These are the years of the life of Ishmael: one hundred thirty-seven years. He gave up the spirit and died, and was gathered to his people.
Gen 25:18 They lived from Havilah to Shur that is before Egypt, as you go toward Assyria. He lived opposite all his relatives.
Gen 25:19 This is the history of the generations of Isaac, Abraham's son. Abraham became the father of Isaac.
Gen 25:20 Isaac was forty years old when he took Rebekah, the daughter of Bethuel the Syrian of Paddan Aram, the sister of Laban the Syrian, to be his wife.
Gen 25:21 Isaac entreated Yahweh for his wife, because she was barren. Yahweh was entreated by him, and Rebekah his wife conceived.
Gen 25:22 The children struggled together within her. She said, "If it be so, why do I live?" She went to inquire of Yahweh.
Gen 25:23 Yahweh said to her, Two nations are in your womb. Two peoples will be separated from your body. The one people will be stronger than the other people. The elder will serve the younger.
Gen 25:24 When her days to be delivered were fulfilled, behold, there were twins in her womb.
Gen 25:25 The first came out red all over, like a hairy garment. They named him Esau.
Gen 25:26 After that, his brother came out, and his hand had hold on Esau's heel. He was named Jacob. Isaac was sixty years old when she bore them.
Gen 25:27 The boys grew. Esau was a skillful hunter, a man of the field. Jacob was a quiet man, living in tents.
Gen 25:28 Now Isaac loved Esau, because he ate his venison. Rebekah loved Jacob.
Gen 25:29 Jacob boiled stew. Esau came in from the field, and he was famished.
Gen 25:30 Esau said to Jacob, "Please feed me with that same red stew, for I am famished." Therefore his name was called Edom.
Gen 25:31 Jacob said, "First, sell me your birthright."
Gen 25:32 Esau said, "Behold, I am about to die. What good is the birthright to me?"
Gen 25:33 Jacob said, "Swear to me first." He swore to him. He sold his birthright to Jacob.
Gen 25:34 Jacob gave Esau bread and stew of lentils. He ate and drank, rose up, and went his way. So Esau despised his birthright.

Are you ready for your journey into eternity by Mark Copeland

http://executableoutlines.com/top/ready.htm
The most important question I can think of... Gary
Email ThisBlogThis!Share to TwitterShare to FacebookShare to Pinterest
Newer Posts Older Posts Home
Subscribe to: Posts (Atom)