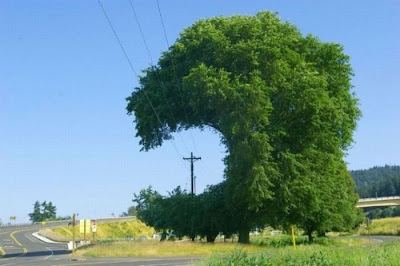 I suppose there is a good reason to trim a tree like this, but I just don't see it. The tree will grow again and in winter snow and ice could wreck the lines. If its in Florida, come hurricane season, good luck. I see this sort of thing every day just South of Zephyrhills, Florida on route 301. I guess I am thick, but it just makes no sense to do this. After awhile though, it occurred to me that trimming a tree like this is akin to allowing sin in your life. Paul puts it this way in the book of Romans.
Rom 6:1-18 (WEB)
6:1 What shall we say then? Shall we continue in sin, that grace may abound?
6:2 May it never be! We who died to sin, how could we live in it any longer?
6:3 Or don’t you know that all we who were baptized into Christ Jesus were baptized into his death?
6:4 We were buried therefore with him through baptism to death, that just like Christ was raised from the dead through the glory of the Father, so we also might walk in newness of life.
6:5 For if we have become united with him in the likeness of his death, we will also be part of his resurrection;
6:6 knowing this, that our old man was crucified with him, that the body of sin might be done away with, so that we would no longer be in bondage to sin.
6:7 For he who has died has been freed from sin.
6:8 But if we died with Christ, we believe that we will also live with him;
6:9 knowing that Christ, being raised from the dead, dies no more. Death no more has dominion over him!
6:10 For the death that he died, he died to sin one time; but the life that he lives, he lives to God.
6:11 Thus consider yourselves also to be dead to sin, but alive to God in Christ Jesus our Lord.
6:12 Therefore don’t let sin reign in your mortal body, that you should obey it in its lusts.
6:13 Neither present your members to sin as instruments of unrighteousness, but present yourselves to God, as alive from the dead, and your members as instruments of righteousness to God.
6:14 For sin will not have dominion over you. For you are not under law, but under grace.
6:15 What then? Shall we sin, because we are not under law, but under grace? May it never be!
6:16 Don’t you know that to whom you present yourselves as servants to obedience, his servants you are whom you obey; whether of sin to death, or of obedience to righteousness?
6:17 But thanks be to God, that, whereas you were bondservants of sin, you became obedient from the heart to that form of teaching whereunto you were delivered.
6:18 Being made free from sin, you became bondservants of righteousness.

Plainly put; if you are a Christian, don't allow sin in your life. Don't make a provision for it and if you discover it, change. Why? Because you are to be holy and this word means separated from sin. Don't just trim the tree of sin like the picture; do your best to eliminate the possibility of sinning. Trim where you can, remove the rest; you will be glad you did!
Email ThisBlogThis!Share to TwitterShare to FacebookShare to Pinterest
Newer Posts Older Posts Home
Subscribe to: Posts (Atom)