V is for VICTORY OF THE SPIRIT 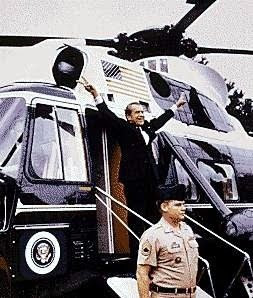 Richard Milhouse Nixon leaving the white house for the last time. Disgraced, yet optimistic; rejected yet positive. I voted for him twice... who knew. He seemed to be a great man, I always like what he said and thought a great deal of him. Remember, HE is the man who went to CHINA. Then along came Watergate and then WHAM, NO MORE NIXON. This picture reminded me of a great man (men) in the old testament who did something wrong and paid the price. Read on to see who it is....
Numbers 20:7-13 WEB (R)
(7) Yahweh spoke to Moses, saying,
(8) Take the rod, and assemble the congregation, you, and Aaron your brother, and speak to the rock before their eyes, that it give forth its water; and you shall bring forth to them water out of the rock; so you shall give the congregation and their livestock drink.
(9) Moses took the rod from before Yahweh, as he commanded him.
(10) Moses and Aaron gathered the assembly together before the rock, and he said to them, Hear now, you rebels; shall we bring you water out of this rock for you?
(11) Moses lifted up his hand, and struck the rock with his rod twice: and water came forth abundantly, and the congregation drank, and their livestock.
(12) Yahweh said to Moses and Aaron, Because you didn't believe in me, to sanctify me in the eyes of the children of Israel, therefore you shall not bring this assembly into the land which I have given them.
(13) These are the waters of Meribah; because the children of Israel strove with Yahweh, and he was sanctified in them.

When great men fail in some way, it lets us all down. How soon we forget that we are ALL HUMAN, that we are ALL SUBJECT TO THE POSSIBILITY OF ERROR. Nixon, Jimmy Swaggart, and many ,many politic ans have fallen short of expectation, but remember THEY ARE ALL HUMAN. Of them all, I think I like Jimmy Swaggart the best, because at least he seemed sincere in his repentance. There were consequences for all of them, but some dealt with it and moved on. Both Moses and Aaron, along with Richard Nixon, still maintained a good attitude (notice Nixon's trademark V gestures) and went on to do the best they could. That's what life's all about, just doing the best you can. In 1974, I was laid off from Norton Co. and frankly I thought my world was coming down around me. At my exit interview, Jack Stryniski told me something better was out there for me.... he was right. That something better was faith and belief in Jesus and so my downtrodden status was changed and like Nixon I can think a "V" in my heart NO MATTER WHAT HAPPENS! So can you!
Email ThisBlogThis!Share to TwitterShare to FacebookShare to Pinterest
Newer Posts Older Posts Home
Subscribe to: Posts (Atom)