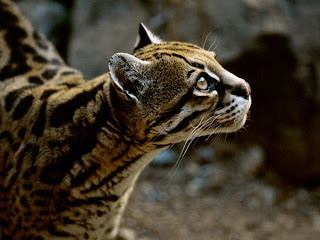 Usually, I scroll through pictures that I have collected over a period of time in order to pick one for the daily post.  It isn't long before I find something that interests me and says something to me about the Scriptures as well.  Today is different; today I am fulfilling a promise to two of my grandchildren; young Mike and Elizabeth.  Some time ago, I promised I would put a picture of an Ocelot on the blog because of the series The Big Bang Theory and the sleepy kitty song that Penny sings to Dr. Sheldon Cooper when he isn't feeling well.  More than that, during the past few months a good friend of mine (Bruce Arnold) introduced me to the Linux operating system and when the new Oneric Ocelot came out, my grand kids loved it as much as I do.  So you can see the motivation for this post.  Only thing is... I couldn't find an Oneric (which means sleepy [and , yes, I had to look the word up])Ocelot.  So, kids... forgive me; this will have to be close enough.  Nice picture though.  Beautiful cat; about twice the size of a normal housecat, this little beauty is native to South America and may be seen as far North as Central America.  When I think of the song in conjunction with the cat, one word comes to mind: COMFORT.  Naturally, the thought of the Gospel of John and the fourteenth chapter...
WEB: John Chapter 14

[1] "“Don’t let your heart be troubled. Believe in God. Believe also in me. [2] In my Father’s house are many homes. If it weren’t so, I would have told you. I am going to prepare a place for you. [3] If I go and prepare a place for you, I will come again, and will receive you to myself; that where I am, you may be there also. [4] Where I go, you know, and you know the way.”"

[6] Jesus said to him, "“I am the way, the truth, and the life. No one comes to the Father, except through me.
Whether you are sick, discouraged or upset, COMFORT is a wonderful thing. Jesus, reassures the apostles hope in the future by telling them of the future home he will be preparing for them.  As usual, they didn't get it, so Jesus explains that he (himself) is to be their guide.  A way that he will show (his own example, or road if you will) a truth that will last forever and a life that will endure for the same length of time.  Lastly, he tells them this is the only way to the Father (in heaven).  Better than any song that could be sung, these words ring out through the centuries as COMFORT AND ALSO HOPE!!!  Think about that before you go to sleep tonight; I will!!!
Email ThisBlogThis!Share to TwitterShare to FacebookShare to Pinterest


Exo 17:1 All the congregation of the children of Israel traveled from the wilderness of Sin, by their journeys, according to Yahweh's commandment, and encamped in Rephidim; but there was no water for the people to drink.
Exo 17:2 Therefore the people quarreled with Moses, and said, "Give us water to drink." Moses said to them, "Why do you quarrel with me? Why do you test Yahweh?"
Exo 17:3 The people were thirsty for water there; and the people murmured against Moses, and said, "Why have you brought us up out of Egypt, to kill us, our children, and our livestock with thirst?"
Exo 17:4 Moses cried to Yahweh, saying, "What shall I do with these people? They are almost ready to stone me."
Exo 17:5 Yahweh said to Moses, "Walk on before the people, and take the elders of Israel with you, and take the rod in your hand with which you struck the Nile, and go.
Exo 17:6 Behold, I will stand before you there on the rock in Horeb. You shall strike the rock, and water will come out of it, that the people may drink." Moses did so in the sight of the elders of Israel.
Exo 17:7 He called the name of the place Massah, and Meribah, because the children of Israel quarreled, and because they tested Yahweh, saying, "Is Yahweh among us, or not?"
Exo 17:8 Then Amalek came and fought with Israel in Rephidim.
Exo 17:9 Moses said to Joshua, "Choose men for us, and go out, fight with Amalek. Tomorrow I will stand on the top of the hill with God's rod in my hand."
Exo 17:10 So Joshua did as Moses had told him, and fought with Amalek; and Moses, Aaron, and Hur went up to the top of the hill.
Exo 17:11 It happened, when Moses held up his hand, that Israel prevailed; and when he let down his hand, Amalek prevailed.
Exo 17:12 But Moses' hands were heavy; and they took a stone, and put it under him, and he sat on it. Aaron and Hur held up his hands, the one on the one side, and the other on the other side. His hands were steady until sunset.
Exo 17:13 Joshua defeated Amalek and his people with the edge of the sword.
Exo 17:14 Yahweh said to Moses, "Write this for a memorial in a book, and rehearse it in the ears of Joshua: that I will utterly blot out the memory of Amalek from under the sky."
Exo 17:15 Moses built an altar, and called its name Yahweh our Banner.
Exo 17:16 He said, "Yah has sworn: 'Yahweh will have war with Amalek from generation to generation.' "