Another use for "Pearly" 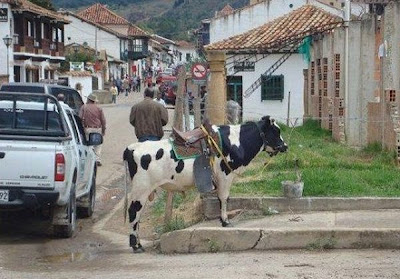 Here is something I bet you have never seen before; a cow used like a horse. Yet, strangely enough, when I was young, my younger brother and I used to ride a cow named "Pearly". We didn't have a saddle of course and the ride was very slow, but we were happy anyway. Its not very often we think of cows being prominent in a Bible story, but here it is.
Samuel 5:8-12 (WEB)
8) They sent therefore and gathered all the lords of the Philistines to them, and said, “What shall we do with the ark of the God of Israel?” They answered, “Let the ark of the God of Israel be carried over to Gath.” They carried the ark of the God of Israel there.
9) It was so, that after they had carried it about, the hand of Yahweh was against the city with a very great confusion: and he struck the men of the city, both small and great; and tumors broke out on them.
10) So they sent the ark of God to Ekron. It happened, as the ark of God came to Ekron, that the Ekronites cried out, saying, “They have brought about the ark of the God of Israel to us, to kill us and our people.”
11) They sent therefore and gathered together all the lords of the Philistines, and they said, “Send away the ark of the God of Israel, and let it go again to its own place, that it not kill us and our people.” For there was a deadly confusion throughout all the city; the hand of God was very heavy there.
12) The men who didn’t die were struck with the tumors; and the cry of the city went up to heaven.
(1 Samuel 5:8-12, WEB)

1 Samuel 6:1-12 (WEB)
1 Samuel 6
1) The ark of Yahweh was in the country of the Philistines seven months.
2) The Philistines called for the priests and the diviners, saying, “What shall we do with the ark of Yahweh? Show us with which we shall send it to its place.”
3) They said, “If you send away the ark of the God of Israel, don’t send it empty; but by all means return him a trespass offering: then you shall be healed, and it shall be known to you why his hand is not removed from you.”
4) Then they said, “What shall be the trespass offering which we shall return to him?” They said, “Five golden tumors, and five golden mice, for the number of the lords of the Philistines; for one plague was on you all, and on your lords.
5) Therefore you shall make images of your tumors, and images of your mice that mar the land; and you shall give glory to the God of Israel: perhaps he will lighten his hand from off you, and from off your gods, and from off your land.
6) Why then do you harden your hearts, as the Egyptians and Pharaoh hardened their hearts? When he had worked wonderfully among them, didn’t they let the people go, and they departed?
7) “Now therefore take and prepare yourselves a new cart, and two milk cows, on which there has come no yoke; and tie the cows to the cart, and bring their calves home from them;
8) and take the ark of Yahweh, and lay it on the cart; and put the jewels of gold, which you return him for a trespass offering, in a coffer by its side; and send it away, that it may go.
9) Behold; if it goes up by the way of its own border to Beth Shemesh, then he has done us this great evil: but if not, then we shall know that it is not his hand that struck us; it was a chance that happened to us.”
10) The men did so, and took two milk cows, and tied them to the cart, and shut up their calves at home;
11) and they put the ark of Yahweh on the cart, and the coffer with the mice of gold and the images of their tumors.
12) The cows took the straight way by the way to Beth Shemesh; they went along the highway, lowing as they went, and didn’t turn aside to the right hand or to the left; and the lords of the Philistines went after them to the border of Beth Shemesh.
(1 Samuel 6:1-12, WEB)

Saul and his sons were dead, the ark was captured by the Philistines, yet story was not over; the Philistines needed to pay for what they did. And pay they did! The WEB refers to their affliction as "tumors", when in fact they were hemorrhoids. The atonement the Philistines had to make was golden images of their tumors along with the ark being returned to Israel. You guessed it, the cows brought them back. Just goes to show you, God always wins in the end.
Email ThisBlogThis!Share to TwitterShare to FacebookShare to Pinterest
Newer Posts Older Posts Home
Subscribe to: Posts (Atom)