Up to your neck 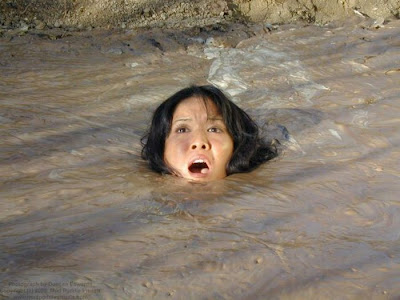 Unless you have existed in a vacuum over the last few years you already know how much trouble many Americans are experiencing today. Loss of jobs, credit crunch, housing foreclosures and many other difficulties. Like the lady in the picture, I know many people who are "up to their neck in trouble". For some, their problems really are not their fault. But, others have brought misfortune upon themselves by just living way beyond their means. We probably could make one very long list of the foolish (sometimes downright stupid) things people do. Yet, even in the worst of circumstances, there is a way out--God's way. Here is an example of just such a person.

Luke 15:11-19 (WEB)
11) He said, “A certain man had two sons.
12) The younger of them said to his father, ‘Father, give me my share of your property.’ He divided his livelihood between them.
13) Not many days after, the younger son gathered all of this together and traveled into a far country. There he wasted his property with riotous living.
14) When he had spent all of it, there arose a severe famine in that country, and he began to be in need.
15) He went and joined himself to one of the citizens of that country, and he sent him into his fields to feed pigs.
16) He wanted to fill his belly with the husks that the pigs ate, but no one gave him any.
17) But when he came to himself he said, ‘How many hired servants of my father’s have bread enough to spare, and I’m dying with hunger!
18) I will get up and go to my father, and will tell him, “Father, I have sinned against heaven, and in your sight.
19) I am no more worthy to be called your son. Make me as one of your hired servants.”’

OK, this son had problems; yet he did one very smart thing... he began to think about his situation. When he realized that even the hired servants had food, he decided to return to his father. Not JUST THAT, he realized what he had done wrong and that wrong was sinful.

Secondly, he did another smart thing... he acted upon his covictions.

20) “He arose, and came to his father. But while he was still far off, his father saw him, and was moved with compassion, and ran, and fell on his neck, and kissed him.
21) The son said to him, ‘Father, I have sinned against heaven, and in your sight. I am no longer worthy to be called your son.’
22) “But the father said to his servants, ‘Bring out the best robe, and put it on him. Put a ring on his hand, and shoes on his feet.
23) Bring the fattened calf, kill it, and let us eat, and celebrate;
24) for this, my son, was dead, and is alive again. He was lost, and is found.’ They began to celebrate.

Self-assessment, when coupled with humility usually has very positive results. I can speak with experience on the last sentence and say that it is very true; I know, I have been there. So, if you are up to your neck in troubles, do what you can to make things right and leave the rest up to God. Besides, mud-baths are relaxing! Who knows, later on there may even be a party!!