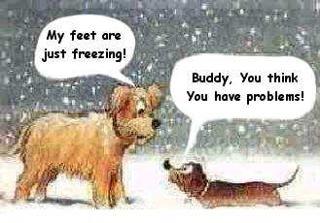 Okay, you don't have to be a genius to see what this picture is about!  Hint; it has nothing to do with what part of you is cold.  Rather, its about caring for others and not just yourself.  Jesus puts it this way...
WEB: Matthew Chapter 25

[31] “But when the Son of Man comes in his glory, and all the holy angels with him, then he will sit on the throne of his glory. [32] Before him all the nations will be gathered, and he will separate them one from another, as a shepherd separates the sheep from the goats. [33] He will set the sheep on his right hand, but the goats on the left. [34] Then the King will tell those on his right hand, ‘Come, blessed of my Father, inherit the Kingdom prepared for you from the foundation of the world; [35] for I was hungry, and you gave me food to eat. I was thirsty, and you gave me drink. I was a stranger, and you took me in. [36] I was naked, and you clothed me. I was sick, and you visited me. I was in prison, and you came to me.’

[40] “The King will answer them, ‘Most certainly I tell you, inasmuch as you did it to one of the least of these my brothers, you did it to me.’ [41] Then he will say also to those on the left hand, ‘Depart from me, you cursed, into the eternal fire which is prepared for the devil and his angels; [42] for I was hungry, and you didn’t give me food to eat; I was thirsty, and you gave me no drink; [43] I was a stranger, and you didn’t take me in; naked, and you didn’t clothe me; sick, and in prison, and you didn’t visit me.’

[44] “Then they will also answer, saying, ‘Lord, when did we see you hungry, or thirsty, or a stranger, or naked, or sick, or in prison, and didn’t help you?’

[45] “Then he will answer them, saying, ‘Most certainly I tell you, inasmuch as you didn’t do it to one of the least of these, you didn’t do it to me.’ [46] These will go away into eternal punishment, but the righteous into eternal life.”"
Tough words, very tough indeed.  But, Jesus was like that; he just spoke plainly, yet powerfully.  Think others don't matter; think again!  To me, this passage speaks directly to Christians.  Do I care for those who love God?  Am I involved in their lives?  If not, why not?  Read the passage again, this time with a view to the consequences if you DON'T CARE.  It should scare you; if it doesn't read it again until it does.  You have more than your feet to worry about!!!
Email ThisBlogThis!Share to TwitterShare to FacebookShare to Pinterest


Rev 19:1 After these things I heard something like a loud voice of a great multitude in heaven, saying, "Hallelujah! Salvation, power, and glory belong to our God:
Rev 19:2 for true and righteous are his judgments. For he has judged the great prostitute, who corrupted the earth with her sexual immorality, and he has avenged the blood of his servants at her hand."
Rev 19:3 A second said, "Hallelujah! Her smoke goes up forever and ever."
Rev 19:4 The twenty-four elders and the four living creatures fell down and worshiped God who sits on the throne, saying, "Amen! Hallelujah!"
Rev 19:5 A voice came forth from the throne, saying, "Give praise to our God, all you his servants, you who fear him, the small and the great!"
Rev 19:6 I heard something like the voice of a great multitude, and like the voice of many waters, and like the voice of mighty thunders, saying, "Hallelujah! For the Lord our God, the Almighty, reigns!
Rev 19:7 Let us rejoice and be exceedingly glad, and let us give the glory to him. For the marriage of the Lamb has come, and his wife has made herself ready."
Rev 19:8 It was given to her that she would array herself in bright, pure, fine linen: for the fine linen is the righteous acts of the saints.
Rev 19:9 He said to me, "Write, 'Blessed are those who are invited to the marriage supper of the Lamb.' " He said to me, "These are true words of God."
Rev 19:10 I fell down before his feet to worship him. He said to me, "Look! Don't do it! I am a fellow bondservant with you and with your brothers who hold the testimony of Jesus. Worship God, for the testimony of Jesus is the Spirit of Prophecy."
Rev 19:11 I saw the heaven opened, and behold, a white horse, and he who sat on it is called Faithful and True. In righteousness he judges and makes war.
Rev 19:12 His eyes are a flame of fire, and on his head are many crowns. He has names written and a name written which no one knows but he himself.
Rev 19:13 He is clothed in a garment sprinkled with blood. His name is called "The Word of God."
Rev 19:14 The armies which are in heaven followed him on white horses, clothed in white, pure, fine linen.
Rev 19:15 Out of his mouth proceeds a sharp, double-edged sword, that with it he should strike the nations. He will rule them with an iron rod. He treads the winepress of the fierceness of the wrath of God, the Almighty.
Rev 19:16 He has on his garment and on his thigh a name written, "KING OF KINGS, AND LORD OF LORDS."
Rev 19:17 I saw an angel standing in the sun. He cried with a loud voice, saying to all the birds that fly in the sky, "Come! Be gathered together to the great supper of God,
Rev 19:18 that you may eat the flesh of kings, the flesh of captains, the flesh of mighty men, and the flesh of horses and of those who sit on them, and the flesh of all men, both free and slave, and small and great."
Rev 19:19 I saw the beast, and the kings of the earth, and their armies, gathered together to make war against him who sat on the horse, and against his army.
Rev 19:20 The beast was taken, and with him the false prophet who worked the signs in his sight, with which he deceived those who had received the mark of the beast and those who worshiped his image. These two were thrown alive into the lake of fire that burns with sulfur.
Rev 19:21 The rest were killed with the sword of him who sat on the horse, the sword which came forth out of his mouth. All the birds were filled with their flesh.


Rev 20:1 I saw an angel coming down out of heaven, having the key of the abyss and a great chain in his hand.
Rev 20:2 He seized the dragon, the old serpent, which is the devil and Satan, who deceives the whole inhabited earth, and bound him for a thousand years,
Rev 20:3 and cast him into the abyss, and shut it, and sealed it over him, that he should deceive the nations no more, until the thousand years were finished. After this, he must be freed for a short time.
Rev 20:4 I saw thrones, and they sat on them, and judgment was given to them. I saw the souls of those who had been beheaded for the testimony of Jesus, and for the word of God, and such as didn't worship the beast nor his image, and didn't receive the mark on their forehead and on their hand. They lived, and reigned with Christ for a thousand years.
Rev 20:5 The rest of the dead didn't live until the thousand years were finished. This is the first resurrection.
Rev 20:6 Blessed and holy is he who has part in the first resurrection. Over these, the second death has no power, but they will be priests of God and of Christ, and will reign with him one thousand years.
Rev 20:7 And after the thousand years, Satan will be released from his prison,
Rev 20:8 and he will come out to deceive the nations which are in the four corners of the earth, Gog and Magog, to gather them together to the war; the number of whom is as the sand of the sea.
Rev 20:9 They went up over the breadth of the earth, and surrounded the camp of the saints, and the beloved city. Fire came down out of heaven from God, and devoured them.
Rev 20:10 The devil who deceived them was thrown into the lake of fire and sulfur, where the beast and the false prophet are also. They will be tormented day and night forever and ever.
Rev 20:11 I saw a great white throne, and him who sat on it, from whose face the earth and the heaven fled away. There was found no place for them.
Rev 20:12 I saw the dead, the great and the small, standing before the throne, and they opened books. Another book was opened, which is the book of life. The dead were judged out of the things which were written in the books, according to their works.
Rev 20:13 The sea gave up the dead who were in it. Death and Hades gave up the dead who were in them. They were judged, each one according to his works.
Rev 20:14 Death and Hades were thrown into the lake of fire. This is the second death, the lake of fire.
Rev 20:15 If anyone was not found written in the book of life, he was cast into the lake of fire.
Email ThisBlogThis!Share to TwitterShare to FacebookShare to Pinterest

Condemned by others by Mark Copeland