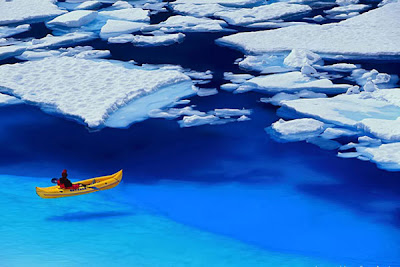 Over the past few years, there has been a lot in the news about water. Water levels rising due to "global warming", water pollution and a lack of clean water for most of the world. So, when I saw this picture, the purity of the water was brought home to me by the littlest of things... the shadow under the canoe. That little shadow revealed the water to be crystal clear and it occurred to me that in Christianity some things are like that; plain, straightforward and true! Here is an example.


Acts 2:22-41 WEB (R)
(22) "Men of Israel, hear these words! Jesus of Nazareth, a man approved by God to you by mighty works and wonders and signs which God did by him in the midst of you, even as you yourselves know,
(23) him, being delivered up by the determined counsel and foreknowledge of God, you have taken by the hand of lawless men, crucified and killed;
(24) whom God raised up, having freed him from the agony of death, because it was not possible that he should be held by it.
(25) For David says concerning him, 'I saw the Lord always before my face, For he is on my right hand, that I should not be moved.
(26) Therefore my heart was glad, and my tongue rejoiced. Moreover my flesh also will dwell in hope;
(27) because you will not leave my soul in Hades, neither will you allow your Holy One to see decay.
(28) You made known to me the ways of life. You will make me full of gladness with your presence.'
(29) "Brothers, I may tell you freely of the patriarch David, that he both died and was buried, and his tomb is with us to this day.
(30) Therefore, being a prophet, and knowing that God had sworn with an oath to him that of the fruit of his body, according to the flesh, he would raise up the Christ to sit on his throne,
(31) he foreseeing this spoke about the resurrection of the Christ, that neither was his soul left in Hades, nor did his flesh see decay.
(32) This Jesus God raised up, to which we all are witnesses.
(33) Being therefore exalted by the right hand of God, and having received from the Father the promise of the Holy Spirit, he has poured out this, which you now see and hear.
(34) For David didn't ascend into the heavens, but he says himself, 'The Lord said to my Lord, "Sit by my right hand,
(35) until I make your enemies a footstool for your feet." '
(36) "Let all the house of Israel therefore know certainly that God has made him both Lord and Christ, this Jesus whom you crucified."
(37) Now when they heard this, they were cut to the heart, and said to Peter and the rest of the apostles, "Brothers, what shall we do?"
(38) Peter said to them, "Repent, and be baptized, every one of you, in the name of Jesus Christ for the forgiveness of sins, and you will receive the gift of the Holy Spirit.
(39) For the promise is to you, and to your children, and to all who are far off, even as many as the Lord our God will call to himself."
(40) With many other words he testified, and exhorted them, saying, "Save yourselves from this crooked generation!"
(41) Then those who gladly received his word were baptized. There were added that day about three thousand souls.


Peter proclaimed Jesus. Simple, straightforward and true. With this truth the path to Spiritual Life was given. Those who heard it, wanted to do something about it. Baptism for the forgiveness of sins was the answer and three thousand responded. Crystal clear understanding. No clouded waters here!!
Email ThisBlogThis!Share to TwitterShare to FacebookShare to Pinterest
Newer Posts Older Posts Home
Subscribe to: Posts (Atom)