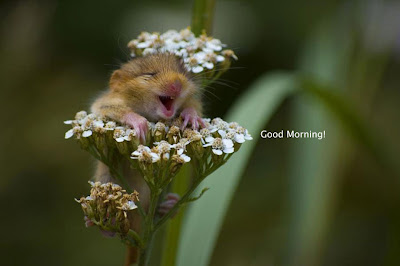 This little fella looks happy!  Remember happiness?  Its being young and waking up on a warm spring day in the month of May... feeling great!!!  Perhaps its the day you bought your first car or house or maybe the day you became a parent?  Those things come and go, but this little passage from the New Testament says it all for me...
WEB: Philippians Chapter 4

[4] Rejoice in the Lord always! Again I will say, “Rejoice!” [5] Let your gentleness be known to all men. The Lord is at hand. [6] In nothing be anxious, but in everything, by prayer and petition with thanksgiving, let your requests be made known to God. [7] And the peace of God, which surpasses all understanding, will guard your hearts and your thoughts in Christ Jesus.
Many things have changed in my life, but God has not changed.  He is right where he has always been and the knowledge of that makes even the worst day something to remember.  If you can't say that right now, then perhaps its time to do something about the situation.  Take some time, reflect on where you are in relation to God.  Open the book, ask someone who says they are a Christian; do something about it.  You will be glad you did; maybe even as glad as the little guy in this picture!!!
Email ThisBlogThis!Share to TwitterShare to FacebookShare to Pinterest


Gen 32:1 Jacob went on his way, and the angels of God met him.
Gen 32:2 When he saw them, Jacob said, "This is God's army." He called the name of that place Mahanaim.
Gen 32:3 Jacob sent messengers in front of him to Esau, his brother, to the land of Seir, the field of Edom.
Gen 32:4 He commanded them, saying, "This is what you shall tell my lord, Esau: 'This is what your servant, Jacob, says. I have lived as a foreigner with Laban, and stayed until now.
Gen 32:5 I have cattle, donkeys, flocks, male servants, and female servants. I have sent to tell my lord, that I may find favor in your sight.' "
Gen 32:6 The messengers returned to Jacob, saying, "We came to your brother Esau. Not only that, but he comes to meet you, and four hundred men with him."
Gen 32:7 Then Jacob was greatly afraid and was distressed. He divided the people who were with him, and the flocks, and the herds, and the camels, into two companies;
Gen 32:8 and he said, "If Esau comes to the one company, and strikes it, then the company which is left will escape."
Gen 32:9 Jacob said, "God of my father Abraham, and God of my father Isaac, Yahweh, who said to me, 'Return to your country, and to your relatives, and I will do you good,'
Gen 32:10 I am not worthy of the least of all the loving kindnesses, and of all the truth, which you have shown to your servant; for with just my staff I passed over this Jordan; and now I have become two companies.
Gen 32:11 Please deliver me from the hand of my brother, from the hand of Esau: for I fear him, lest he come and strike me, and the mothers with the children.
Gen 32:12 You said, 'I will surely do you good, and make your seed as the sand of the sea, which can't be numbered because there are so many.' "
Gen 32:13 He lodged there that night, and took from that which he had with him, a present for Esau, his brother:
Gen 32:14 two hundred female goats and twenty male goats, two hundred ewes and twenty rams,
Gen 32:15 thirty milk camels and their colts, forty cows, ten bulls, twenty female donkeys and ten foals.
Gen 32:16 He delivered them into the hands of his servants, every herd by itself, and said to his servants, "Pass over before me, and put a space between herd and herd."
Gen 32:17 He commanded the foremost, saying, "When Esau, my brother, meets you, and asks you, saying, 'Whose are you? Where are you going? Whose are these before you?'
Gen 32:18 Then you shall say, 'They are your servant, Jacob's. It is a present sent to my lord, Esau. Behold, he also is behind us.' "
Gen 32:19 He commanded also the second, and the third, and all that followed the herds, saying, "This is how you shall speak to Esau, when you find him.
Gen 32:20 You shall say, 'Not only that, but behold, your servant, Jacob, is behind us.' " For, he said, "I will appease him with the present that goes before me, and afterward I will see his face. Perhaps he will accept me."
Gen 32:21 So the present passed over before him, and he himself lodged that night in the camp.
Gen 32:22 He rose up that night, and took his two wives, and his two handmaids, and his eleven sons, and passed over the ford of the Jabbok.
Gen 32:23 He took them, and sent them over the stream, and sent over that which he had.
Gen 32:24 Jacob was left alone, and wrestled with a man there until the breaking of the day.
Gen 32:25 When he saw that he didn't prevail against him, he touched the hollow of his thigh, and the hollow of Jacob's thigh was strained, as he wrestled.
Gen 32:26 The man said, "Let me go, for the day breaks." Jacob said, "I won't let you go, unless you bless me."
Gen 32:27 He said to him, "What is your name?" He said, "Jacob."
Gen 32:28 He said, "Your name will no longer be called Jacob, but Israel; for you have fought with God and with men, and have prevailed."
Gen 32:29 Jacob asked him, "Please tell me your name." He said, "Why is it that you ask what my name is?" He blessed him there.
Gen 32:30 Jacob called the name of the place Peniel: for, he said, "I have seen God face to face, and my life is preserved."
Gen 32:31 The sun rose on him as he passed over Peniel, and he limped because of his thigh.
Gen 32:32 Therefore the children of Israel don't eat the sinew of the hip, which is on the hollow of the thigh, to this day, because he touched the hollow of Jacob's thigh in the sinew of the hip.


Mat 17:1 After six days, Jesus took with him Peter, James, and John his brother, and brought them up into a high mountain by themselves.
Mat 17:2 He was transfigured before them. His face shone like the sun, and his garments became as white as the light.
Mat 17:3 Behold, Moses and Elijah appeared to them talking with him.
Mat 17:4 Peter answered, and said to Jesus, "Lord, it is good for us to be here. If you want, let's make three tents here: one for you, one for Moses, and one for Elijah."
Mat 17:5 While he was still speaking, behold, a bright cloud overshadowed them. Behold, a voice came out of the cloud, saying, "This is my beloved Son, in whom I am well pleased. Listen to him."
Mat 17:6 When the disciples heard it, they fell on their faces, and were very afraid.
Mat 17:7 Jesus came and touched them and said, "Get up, and don't be afraid."
Mat 17:8 Lifting up their eyes, they saw no one, except Jesus alone.
Mat 17:9 As they were coming down from the mountain, Jesus commanded them, saying, "Don't tell anyone what you saw, until the Son of Man has risen from the dead."
Mat 17:10 His disciples asked him, saying, "Then why do the scribes say that Elijah must come first?"
Mat 17:11 Jesus answered them, "Elijah indeed comes first, and will restore all things,
Mat 17:12 but I tell you that Elijah has come already, and they didn't recognize him, but did to him whatever they wanted to. Even so the Son of Man will also suffer by them."
Mat 17:13 Then the disciples understood that he spoke to them of John the Baptizer.
Mat 17:14 When they came to the multitude, a man came to him, kneeling down to him, saying,
Mat 17:15 "Lord, have mercy on my son, for he is epileptic, and suffers grievously; for he often falls into the fire, and often into the water.
Mat 17:16 So I brought him to your disciples, and they could not cure him."
Mat 17:17 Jesus answered, "Faithless and perverse generation! How long will I be with you? How long will I bear with you? Bring him here to me."
Mat 17:18 Jesus rebuked him, the demon went out of him, and the boy was cured from that hour.
Mat 17:19 Then the disciples came to Jesus privately, and said, "Why weren't we able to cast it out?"
Mat 17:20 He said to them, "Because of your unbelief. For most certainly I tell you, if you have faith as a grain of mustard seed, you will tell this mountain, 'Move from here to there,' and it will move; and nothing will be impossible for you.
Mat 17:21 But this kind doesn't go out except by prayer and fasting."
Mat 17:22 While they were staying in Galilee, Jesus said to them, "The Son of Man is about to be delivered up into the hands of men,
Mat 17:23 and they will kill him, and the third day he will be raised up." They were exceedingly sorry.
Mat 17:24 When they had come to Capernaum, those who collected the didrachma coins came to Peter, and said, "Doesn't your teacher pay the didrachma?"
Mat 17:25 He said, "Yes." When he came into the house, Jesus anticipated him, saying, "What do you think, Simon? From whom do the kings of the earth receive toll or tribute? From their children, or from strangers?"
Mat 17:26 Peter said to him, "From strangers." Jesus said to him, "Therefore the children are exempt.
Mat 17:27 But, lest we cause them to stumble, go to the sea, cast a hook, and take up the first fish that comes up. When you have opened its mouth, you will find a stater coin. Take that, and give it to them for me and you."


This one is a "must read"... Gary
Email ThisBlogThis!Share to TwitterShare to FacebookShare to Pinterest
Newer Posts Older Posts Home
Subscribe to: Posts (Atom)