Things change... or do they? 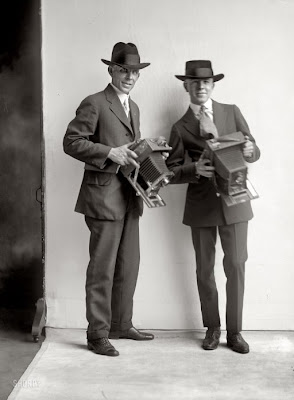 I met someone today who was copying a huge amount of old Polaroid snapshots. You don't see that much anymore as these have given way to the more convenient digital cameras with their memory cards. Recently, I read somewhere that Polaroid is going to revamp the older technology, in order to revitalize the sales of Polaroid film. That would be nice because I have one of those old cameras and would look forward to using it again (if I could find the film). When I saw this picture, I realized how much photography has changed since this 1921 picture was taken. Wow, are they big cameras!! But, they still are cameras and though today's units may look differently, they have a lot in common with these big ones from that bygone era. But, what if something were completely new, new in the sense that it really was different? Read what the writer to the Hebrews has to say on the subject.
Hebrews 5:1-10 (WEB)
1) For every high priest, being taken from among men, is appointed for men in things pertaining to God, that he may offer both gifts and sacrifices for sins.
2) The high priest can deal gently with those who are ignorant and going astray, because he himself is also surrounded with weakness.
3) Because of this, he must offer sacrifices for sins for the people, as well as for himself.
4) Nobody takes this honor on himself, but he is called by God, just like Aaron was.
5) So also Christ didn’t glorify himself to be made a high priest, but it was he who said to him, “You are my Son. Today I have become your father.”
6) As he says also in another place, “You are a priest forever, after the order of Melchizedek.”
7) He, in the days of his flesh, having offered up prayers and petitions with strong crying and tears to him who was able to save him from death, and having been heard for his godly fear,
8) though he was a Son, yet learned obedience by the things which he suffered.
9) Having been made perfect, he became to all of those who obey him the author of eternal salvation,
10) named by God a high priest after the order of Melchizedek.
(Hebrews 5:1-10, WEB)

Jesus was (and is) different because he lives forever. Because of this, his sacrifice is better than that of the mortal Levitical priesthood who were subject to death. I like the idea of being given something that will not change! The cameras in the picture may look quaint, but try using them all day.... you would wind up with arms like the current governor of California. I think I will keep my current digital camera after all. But once in awhile, just for fun, I think I will take a couple of Polaroids.
Email ThisBlogThis!Share to TwitterShare to FacebookShare to Pinterest
Newer Posts Older Posts Home
Subscribe to: Posts (Atom)