The new; "what you know" 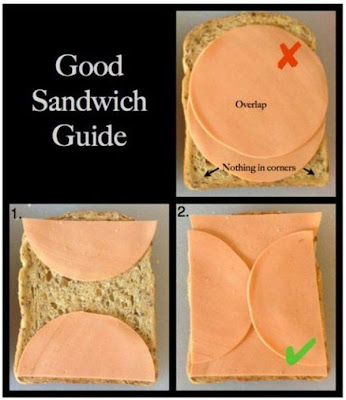 I have made thousands upon thousands of sandwiches, but it never even entered into my mind to do this.  Most of the time, I place one piece of mean on top of the other and that leaves openings at the edges.  Recently, my sandwiches have changed from regular "cold cuts" to those whose ingredients include turkey and after seeing this, its probably time to make another change.  I always thought life would get boring as I aged; boy was I wrong!!!  I never dreamed I would still be learning things in retirement!!!  God is surprising me every day!!!!  Somehow these verses from the book of 1 Corinthians makes more sense than ever now...

9 But as it is written, “Things which an eye didn’t see, and an ear didn’t hear,which didn’t enter into the heart of man,these God has prepared for those who love him.”

This blog began by a realizing a simple fact: God can be seen all around us, if we but look!!!  Things like marvellous sunsets, rainbows, the tender loving smiles of infants and the devotion of a dog can help us to realize how much God loves us.  However, there are lessons to be learned from the unpleasant things in life as well.  Things we would rather forget; things that really hurt.  Throughout the good and the bad, God is there, teaching us, helping us and moulding us over time.  Look, keep looking... and then, open your Bible!!!  God will show you even more wonderful things than you can imagine!!!!  If something can be learned from the humble baloney sandwich, then, anything is possible!!!
Email ThisBlogThis!Share to TwitterShare to FacebookShare to Pinterest

BEWARE WHAT YOU BELIEVE by Gary Womack

BEWARE WHAT YOU BELIEVE

Be Mine, by Gary Womack

Get Saved by Jim McGuiggan

Everybody wants to save us from something. Teachers want to save us from ignorance, doctors want to save us from disease and financial advisors want to save us from the mismanagement of whatever money we have. It’s all good and all praiseworthy. There’s no point in being stupid about it, all these things are important to us as we live out our lives. But sometimes we hunger for something deeper than that. Down inside us we know there's a need for a profounder salvation. That's the business Jesus Christ is in.
He opens up our eyes to a bigger life and a richer humanity. He talks to us of "destiny" and "mission" and "life" that is brimful of life. He comes telling us that all these needful things are not the same as life. He comes saying that the body’s more than something to put clothes on, that living is more than three meals a day and twelve hours at work. He says housekeeping is needful but it isn’t the sum total of what we were made for!
He comes saying that our families and friends and health and music and reputation are all God’s gifts to be enjoyed but he says that if we’re to make them substitutes for his Holy Father that we’ll remain forever hungry and dissatisfied. The hunger, the sense of "there’s more than this" that nibbles at the edges of our minds shouldn’t be dismissed as nothing. It’s God working with us. He says he made us for more than all these. Not for less! But for more than all these lovely gifts. How can you tell? Hmmm, I suppose there’s only one way to tell if Christ is all he claims to be. "Taste, and see that the Lord is good." Give it a shot, get saved!
Let him save you from your sins. Yes, sins! The host of things you’ve done wrong down the years. Things about which you feel ashamed even at this distance. Not just crass evils but "respectable" wrongs, common wrongs, the wrongs of which we’re all guilty. Wrongs that we’re used to calling "wrongs" and he calls "sins" because, whether we’ve known it nor not, they’ve dishonored him.
Let him save you from your lack of profound purpose and the emptiness that sometimes comes over you in a wave of near mental nausea.
Let him save you from your settling for less. He loves our pleasure. For pity’s sake he gives us the gifts of music, romantic love, health and the like for us to enjoy! He doesn’t begrudge us our pleasure—he provides it! But it’s himself he wants to give and that makes all the difference. Get saved!
Television watching, door knock, she goes, speaks to someone at the door for several minutes. She comes back, silent. Who? A Christian. What did he want? Wanted to know if I was saved. Did you tell him you went to church regularly? He didn’t ask me that. Asked me if I was saved. Yes, but did you tell him that you’re involved in community programs around here? He didn’t ask me that either. Just asked me if I was saved. I know, but did you not tell him you taught school, sang in the choir and visited nursing homes? Are you listening to me? He didn’t ask me anything like that. He just asked me if I was saved. And...I’m not.
Do it, please. Get saved.

Genesis through Deuteronomy and Joshua (2) by Jim McGuiggan

Genesis through Deuteronomy and Joshua (2)

Gen 26:1 There was a famine in the land, besides the first famine that was in the days of Abraham. Isaac went to Abimelech king of the Philistines, to Gerar.
Gen 26:2 Yahweh appeared to him, and said, "Don't go down into Egypt. Live in the land I will tell you about.
Gen 26:3 Sojourn in this land, and I will be with you, and will bless you. For to you, and to your seed, I will give all these lands, and I will establish the oath which I swore to Abraham your father.
Gen 26:4 I will multiply your seed as the stars of the sky, and will give to your seed all these lands. In your seed will all the nations of the earth be blessed,
Gen 26:5 because Abraham obeyed my voice, and kept my requirements, my commandments, my statutes, and my laws."
Gen 26:6 Isaac lived in Gerar.
Gen 26:7 The men of the place asked him about his wife. He said, "She is my sister," for he was afraid to say, "My wife," lest, he thought, "the men of the place might kill me for Rebekah, because she is beautiful to look at."
Gen 26:8 It happened, when he had been there a long time, that Abimelech king of the Philistines looked out at a window, and saw, and, behold, Isaac was caressing Rebekah, his wife.
Gen 26:9 Abimelech called Isaac, and said, "Behold, surely she is your wife. Why did you say, 'She is my sister?' " Isaac said to him, "Because I said, 'Lest I die because of her.' "
Gen 26:10 Abimelech said, "What is this you have done to us? One of the people might easily have lain with your wife, and you would have brought guilt on us!"
Gen 26:11 Abimelech commanded all the people, saying, "He who touches this man or his wife will surely be put to death."
Gen 26:12 Isaac sowed in that land, and reaped in the same year one hundred times what he planted. Yahweh blessed him.
Gen 26:13 The man grew great, and grew more and more until he became very great.
Gen 26:14 He had possessions of flocks, possessions of herds, and a great household. The Philistines envied him.
Gen 26:15 Now all the wells which his father's servants had dug in the days of Abraham his father, the Philistines had stopped, and filled with earth.
Gen 26:16 Abimelech said to Isaac, "Go from us, for you are much mightier than we."
Gen 26:17 Isaac departed from there, encamped in the valley of Gerar, and lived there.
Gen 26:18 Isaac dug again the wells of water, which they had dug in the days of Abraham his father. For the Philistines had stopped them after the death of Abraham. He called their names after the names by which his father had called them.
Gen 26:19 Isaac's servants dug in the valley, and found there a well of springing water.
Gen 26:20 The herdsmen of Gerar argued with Isaac's herdsmen, saying, "The water is ours." He called the name of the well Esek, because they contended with him.
Gen 26:21 They dug another well, and they argued over that, also. He called its name Sitnah.
Gen 26:22 He left that place, and dug another well. They didn't argue over that one. He called it Rehoboth. He said, "For now Yahweh has made room for us, and we will be fruitful in the land."
Gen 26:23 He went up from there to Beersheba.
Gen 26:24 Yahweh appeared to him the same night, and said, "I am the God of Abraham your father. Don't be afraid, for I am with you, and will bless you, and multiply your seed for my servant Abraham's sake."
Gen 26:25 He built an altar there, and called on the name of Yahweh, and pitched his tent there. There Isaac's servants dug a well.
Gen 26:26 Then Abimelech went to him from Gerar, and Ahuzzath his friend, and Phicol the captain of his army.
Gen 26:27 Isaac said to them, "Why have you come to me, since you hate me, and have sent me away from you?"
Gen 26:28 They said, "We saw plainly that Yahweh was with you. We said, 'Let there now be an oath between us, even between us and you, and let us make a covenant with you,
Gen 26:29 that you will do us no harm, as we have not touched you, and as we have done to you nothing but good, and have sent you away in peace.' You are now the blessed of Yahweh."
Gen 26:30 He made them a feast, and they ate and drank.
Gen 26:31 They rose up some time in the morning, and swore one to another. Isaac sent them away, and they departed from him in peace.
Gen 26:32 It happened the same day, that Isaac's servants came, and told him concerning the well which they had dug, and said to him, "We have found water."
Gen 26:33 He called it Shibah. Therefore the name of the city is Beersheba to this day.
Gen 26:34 When Esau was forty years old, he took as wife Judith, the daughter of Beeri the Hittite, and Basemath, the daughter of Elon the Hittite.
Gen 26:35 They grieved Isaac's and Rebekah's spirits.