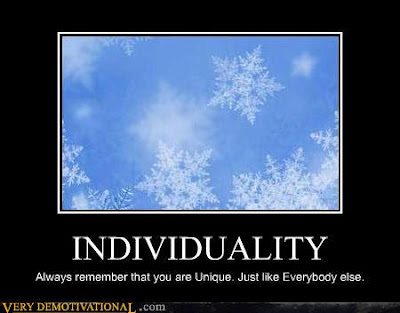 Unless they perfect cloning, there will never be another "me".  I am glad of that because if everyone were all alike, how boring the world would be.  We actually need the differences in others to compliment ourselves.  Yes, we need other people!!!  Let us not forget though, how special each one of us is.  We were all born in different places at different points in history and have been subject to different experiences.  And we react to them differently as well.  In short, we ARE INDIVIDUALS.  Yet, at the same time we are all generically the same.  paradoxical, isn't it?  So much of life is like that; we know so much but understand so little!!!  However, there was one who was really different, you know him by the name Jesus.  This chapter from the book of John tells us something of this very special "snowflake".
WEB: John Chapter 1

[1] In the beginning was the Word, and the Word was with God, and the Word was God. [2] The same was in the beginning with God. [3] All things were made through him. Without him was not anything made that has been made. [4] In him was life, and the life was the light of men. [5] The light shines in the darkness, and the darkness hasn’t overcome it. [6] There came a man, sent from God, whose name was John. [7] The same came as a witness, that he might testify about the light, that all might believe through him. [8] He was not the light, but was sent that he might testify about the light. [9] The true light that enlightens everyone was coming into the world.

[10] He was in the world, and the world was made through him, and the world didn’t recognize him. [11] He came to his own, and those who were his own didn’t receive him. [12] But as many as received him, to them he gave the right to become God’s children, to those who believe in his name: [13] who were born not of blood, nor of the will of the flesh, nor of the will of man, but of God. [14] The Word became flesh, and lived among us. We saw his glory, such glory as of the one and only Son of the Father, full of grace and truth. [15] John testified about him. He cried out, saying, “This was he of whom I said, ‘He who comes after me has surpassed me, for he was before me.’” [16] From his fullness we all received grace upon grace. [17] For the law was given through Moses. Grace and truth were realized through Jesus Christ. [18] No one has seen God at any time. The one and only Son, who is in the bosom of the Father, he has declared him.
I know of no other religion where God actually became a human being and sacrificed himself for his own creation.  To understand this concept is the beginning of understanding Christianity!!!  One God, one way to heaven; not the myriad of solutions that we mere humans invent.  Want proof?  Really need proof? Consider that the biggest problem we have is death.  Jesus overcame that!  Not enough proof?  Ask yourself, "who really loves me enough to die for me?"  Let me guess... pretty short list, isn't it?  Perhaps some of the people on your list might change their mind at the last minute or die before they could help you or go on a trip or something.  Now, cross off all the people on your list that these things could happen to and you will be left without a list.  Jesus died for me.  Jesus IS MY LIST, PERIOD!!!!  Jesus really did do what the Bible said he did; 1st Corinthians fifteen says there were five hundred witnesses to his resurrection and frankly that is more than enough for my skeptical mind.  How can five hundred people all be wrong?  Why weren't they immediately refuted if they were wrong?  The answer is simple, THEY WERE RIGHT!!!!!  Yes, we are unique; yes were are also all alike and yes we have hope through the sacrifice of a Jew named Jesus some two thousand years ago.  That is the cold, hard truth and at the same time a warm wonderful thing as well.  Here we go again, another paradox!!!  Relax, not all paradoxes are equal; this one happens to be the good kind.  Bye, for now... from your friendly snowflake...
Email ThisBlogThis!Share to TwitterShare to FacebookShare to Pinterest


1Jn 1:1 That which was from the beginning, that which we have heard, that which we have seen with our eyes, that which we saw, and our hands touched, concerning the Word of life
1Jn 1:2 (and the life was revealed, and we have seen, and testify, and declare to you the life, the eternal life, which was with the Father, and was revealed to us);
1Jn 1:3 that which we have seen and heard we declare to you, that you also may have fellowship with us. Yes, and our fellowship is with the Father, and with his Son, Jesus Christ.
1Jn 1:4 And we write these things to you, that our joy may be fulfilled.
1Jn 1:5 This is the message which we have heard from him and announce to you, that God is light, and in him is no darkness at all.
1Jn 1:6 If we say that we have fellowship with him and walk in the darkness, we lie, and don't tell the truth.
1Jn 1:7 But if we walk in the light, as he is in the light, we have fellowship with one another, and the blood of Jesus Christ, his Son, cleanses us from all sin.
1Jn 1:8 If we say that we have no sin, we deceive ourselves, and the truth is not in us.
1Jn 1:9 If we confess our sins, he is faithful and righteous to forgive us the sins, and to cleanse us from all unrighteousness.
1Jn 1:10 If we say that we haven't sinned, we make him a liar, and his word is not in us.
Email ThisBlogThis!Share to TwitterShare to FacebookShare to Pinterest

The price and prevention of adultery by Mark Copeland