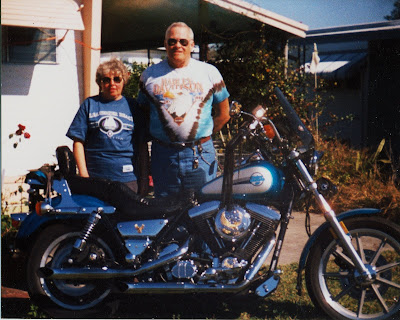 This is a picture of Nancy and Ted Rose. They stood up for Linda and I when we were married. They were an average couple;Nancy was a homemaker and Ted drove truck. One thing though, Ted loved motorcycles. He even raced in the winter on frozen Lake George N.Y.. I am told this beautiful bike was later gold-plated, which made it worth a great deal of money. But most of all I remember Ted because to me he was a hero; someone who defended me when I was too little to do it myself. Hero's are a hard commodity to come by today, but there are quite a few in the Bible; one of my favorites is found it the book of First Samuel:
1Sa 17:33 Saul said to David, You are not able to go against this Philistine to fight with him; for you are but a youth, and he a man of war from his youth.
1Sa 17:34 David said to Saul, Your servant was keeping his father's sheep; and when there came a lion, or a bear, and took a lamb out of the flock,
1Sa 17:35 I went out after him, and struck him, and delivered it out of his mouth; and when he arose against me, I caught him by his beard, and struck him, and killed him.
1Sa 17:36 Your servant struck both the lion and the bear: and this uncircumcised Philistine shall be as one of them, seeing he has defied the armies of the living God.
1Sa 17:37 David said, Yahweh who delivered me out of the paw of the lion, and out of the paw of the bear, he will deliver me out of the hand of this Philistine. Saul said to David, Go, and Yahweh shall be with you.
1Sa 17:38 Saul clad David with his clothing, and he put a helmet of brass on his head, and he clad him with a coat of mail.
1Sa 17:39 David girded his sword on his clothing, and he tried to go; for he had not proved it. David said to Saul, I can't go with these; for I have not proved them. David put them off him.
1Sa 17:40 He took his staff in his hand, and chose him five smooth stones out of the brook, and put them in the shepherd's bag which he had, even in his wallet; and his sling was in his hand: and he drew near to the Philistine.
1Sa 17:41 The Philistine came on and drew near to David; and the man who bore the shield went before him.
1Sa 17:42 When the Philistine looked about, and saw David, he disdained him; for he was but a youth, and ruddy, and withal of a fair face.
1Sa 17:43 The Philistine said to David, Am I a dog, that you come to me with sticks? The Philistine cursed David by his gods.
1Sa 17:44 The Philistine said to David, Come to me, and I will give your flesh to the birds of the sky, and to the animals of the field.
1Sa 17:45 Then said David to the Philistine, You come to me with a sword, and with a spear, and with a javelin: but I come to you in the name of Yahweh of Armies, the God of the armies of Israel, whom you have defied.
1Sa 17:46 This day Yahweh will deliver you into my hand; and I will strike you, and take your head from off you; and I will give the dead bodies of the army of the Philistines this day to the birds of the sky, and to the wild animals of the earth; that all the earth may know that there is a God in Israel,
1Sa 17:47 and that all this assembly may know that Yahweh doesn't save with sword and spear: for the battle is Yahweh's, and he will give you into our hand.
1Sa 17:48 It happened, when the Philistine arose, and came and drew near to meet David, that David hurried, and ran toward the army to meet the Philistine.
1Sa 17:49 David put his hand in his bag, and took there a stone, and slang it, and struck the Philistine in his forehead; and the stone sank into his forehead, and he fell on his face to the earth.
1Sa 17:50 So David prevailed over the Philistine with a sling and with a stone, and struck the Philistine, and killed him; but there was no sword in the hand of David.
1Sa 17:51 Then David ran, and stood over the Philistine, and took his sword, and drew it out of its sheath, and killed him, and cut off his head therewith. When the Philistines saw that their champion was dead, they fled.
World English Bible
David showed great courage as well as great confidence in God. He was a genuine hero! His actions caused Israel to prevail over the Philistines. When I think of David its always as a man of war and not as The King of Israel who reigned forty years, so I envision him fighting and not ruling or even relaxing. But I can't help but wonder though, if perhaps he had a gold plated chariot at the back of the palace for weekend races?