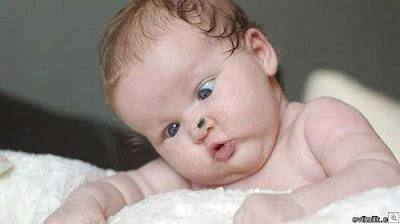 This baby has something on "his" mind and I wonder what that could be? "He" better not study that fly too long or his eyes might stay like that forever. Sometimes adults do the same sort of thing in real life; they focus on one thing rather than stepping back and getting the big picture. When the focus involves religion... look out. I wonder how much evil has been done in the name of God by well meaning but myopic zealots? To see what I mean read the following passage from the Gospel of Luke ....

Luk 13:10 He was teaching in one of the synagogues on the Sabbath day.
Luk 13:11 Behold, there was a woman who had a spirit of infirmity eighteen years, and she was bent over, and could in no way straighten herself up.
Luk 13:12 When Jesus saw her, he called her, and said to her, "Woman, you are freed from your infirmity."
Luk 13:13 He laid his hands on her, and immediately she stood up straight, and glorified God. Luk 13:14 The ruler of the synagogue, being indignant because Jesus had healed on the Sabbath, said to the multitude, "There are six days in which men ought to work. Therefore come on those days and be healed, and not on the Sabbath day!"
Luk 13:15 Therefore the Lord answered him, "You hypocrites! Doesn't each one of you free his ox or his donkey from the stall on the Sabbath, and lead him away to water?
Luk 13:16 Ought not this woman, being a daughter of Abraham, whom Satan had bound eighteen long years, be freed from this bondage on the Sabbath day?"
Luk 13:17 As he said these things, all his adversaries were disappointed, and all the multitude rejoiced for all the glorious things that were done by him.

Should Jesus have healed on the Sabbath? Good question: the Hebrew Bible forbade work on the Sabbath, but Jesus tempered Scripture with insightful love. His answer was common sense; if you would do good to an animal, what about a woman (who is far more valuable). The ruler of the synagogue was like the baby in the picture in that he focused a little too much on one thing (in this case the law) and not enough on the person for whom the law was made. It is a good thing to hold to The Word of God in high regard, but always remember to step back for perspective, or you might not see things as they really are. Anyone have a fly-swatter?
Email ThisBlogThis!Share to TwitterShare to FacebookShare to Pinterest
Newer Posts Older Posts Home
Subscribe to: Posts (Atom)