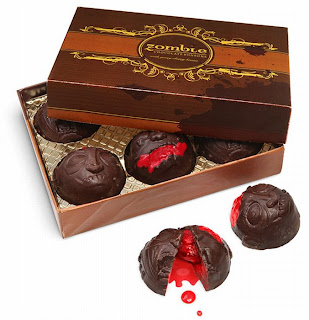 Zombies!!! Yikes!!! Not really.  They are cleverly designed stories to frighten and if you have ever seen a Zombie movie, they are quite effective.  But they ARE just tales and not reality.  Whoever had the idea of making Zombie candy, had a great idea, but, remember, its just an idea, nothing more.  Reality is the lives of human beings, lived in the real world, with real people having real problems.  So, we come to a passage from the book of Second Peter....
WEB: II Peter Chapter 1

[1] Simon Peter, a servant and apostle of Jesus Christ, to those who have obtained a like precious faith with us in the righteousness of our God and Savior, Jesus Christ: [2] Grace to you and peace be multiplied in the knowledge of God and of Jesus our Lord, [3] seeing that his divine power has granted to us all things that pertain to life and godliness, through the knowledge of him who called us by his own glory and virtue; [4] by which he has granted to us his precious and exceedingly great promises; that through these you may become partakers of the divine nature, having escaped from the corruption that is in the world by lust. [5] Yes, and for this very cause adding on your part all diligence, in your faith supply moral excellence; and in moral excellence, knowledge; [6] and in knowledge, self-control; and in self-control patience; and in patience godliness; [7] and in godliness brotherly affection; and in brotherly affection, love. [8] For if these things are yours and abound, they make you to be not idle nor unfruitful to the knowledge of our Lord Jesus Christ. [9] For he who lacks these things is blind, seeing only what is near, having forgotten the cleansing from his old sins. [10] Therefore, brothers, be more diligent to make your calling and election sure. For if you do these things, you will never stumble. [11] For thus you will be richly supplied with the entrance into the eternal Kingdom of our Lord and Savior, Jesus Christ.

[12] Therefore I will not be negligent to remind you of these things, though you know them, and are established in the present truth. [13] I think it right, as long as I am in this tent, to stir you up by reminding you; [14] knowing that the putting off of my tent comes swiftly, even as our Lord Jesus Christ made clear to me. [15] Yes, I will make every effort that you may always be able to remember these things even after my departure. [16] For we did not follow cunningly devised fables, when we made known to you the power and coming of our Lord Jesus Christ, but we were eyewitnesses of his majesty. [17] For he received from God the Father honor and glory, when the voice came to him from the Majestic Glory, “This is my beloved Son, in whom I am well pleased.” [18] We heard this voice come out of heaven when we were with him on the holy mountain.
As you will probably remember, I enjoy watching "The Big Bang Theory".  However, there are somethings that are not so great about it.  First is their casual attitude towards sex outside of marriage and secondly the attitude that if one is a Christian, he or she can't be very bright and is probably downright backwards.  But, the idea that Christianity lacks intellectual acuity is foolishness.  All you have to do is THINK about what is actually said by Jesus, how profound his teachings are and how deep their impact is on the character of a follower and soon you will dismiss the intellectual snobery of "intellectuals" for what it is: PRIDE!!! The truth of the matter is that Christianity is founded on facts, is lived by people of intelligence and will be proven correct to every single person upon entrance into the next existence.  Billions upon billions of people have seen the truth of this; it is NOT A FAIRYTALE, but rather, IT IS THE TRUTH!!!  I have never heard of anyone who would die to prove the existence of a Zombie, but untold lives have been offered as proof of a resurrected savior.  Believe it, because its true!!!!!
Email ThisBlogThis!Share to TwitterShare to FacebookShare to Pinterest

"THE BOOK OF DANIEL" Chapter Nine by Mark Copeland