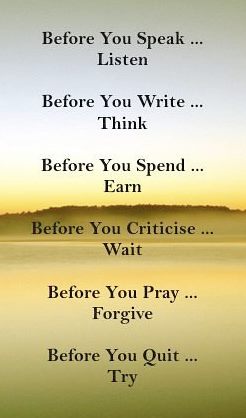 Some of these I am good at, others, well... not so much (you guess which ones). I really liked this because it reminded me that there are options in life.  Just because I have always tended to do some of these things, does NOT mean I have to continue to do them.  Life can be personal growth if we ALLOW ourselves to grow.  But, how does this happen?  Peter's second letter provides one of the ways...
WEB: II Peter Chapter 1

[1] Simon Peter, a servant and apostle of Jesus Christ, to those who have obtained a like precious faith with us in the righteousness of our God and Savior, Jesus Christ: [2] Grace to you and peace be multiplied in the knowledge of God and of Jesus our Lord, [3] seeing that his divine power has granted to us all things that pertain to life and godliness, through the knowledge of him who called us by his own glory and virtue; [4] by which he has granted to us his precious and exceedingly great promises; that through these you may become partakers of the divine nature, having escaped from the corruption that is in the world by lust. [5] Yes, and for this very cause adding on your part all diligence, in your faith supply moral excellence; and in moral excellence, knowledge; [6] and in knowledge, self-control; and in self-control patience; and in patience godliness; [7] and in godliness brotherly affection; and in brotherly affection, love. [8] For if these things are yours and abound, they make you to be not idle nor unfruitful to the knowledge of our Lord Jesus Christ.
I am over 60; I just didn't wake up retired, I had to grow into it.  In order to get this far, I did what everybody does, grow physically, learn, control and be persistent.  Eventually... here I am.  Peter talks about spiritual growth.  It takes time and effort.  Doing one thing right and adding another.  Getting the second right and adding another and so forth.  You may be good at different things in the list than I am and you may add by two's or three's, but you ADD!!! The key thought here is growth!!!  Be patient with yourself, some of the things in the picture and Peter's list are harder than others to do, but with effort, you can do almost anything.  I know, it took two years and seven attempts to quit smoking; but the good news is... the year was 1971.  Success!!!  Now, all I have to do is to pick another one from the lists and try one more time... but, which one?
Email ThisBlogThis!Share to TwitterShare to FacebookShare to Pinterest


Heb 6:1 Therefore leaving the doctrine of the first principles of Christ, let us press on to perfection--not laying again a foundation of repentance from dead works, of faith toward God,
Heb 6:2 of the teaching of baptisms, of laying on of hands, of resurrection of the dead, and of eternal judgment.
Heb 6:3 This will we do, if God permits.
Heb 6:4 For concerning those who were once enlightened and tasted of the heavenly gift, and were made partakers of the Holy Spirit,
Heb 6:5 and tasted the good word of God, and the powers of the age to come,
Heb 6:6 and then fell away, it is impossible to renew them again to repentance; seeing they crucify the Son of God for themselves again, and put him to open shame.
Heb 6:7 For the land which has drunk the rain that comes often on it, and brings forth a crop suitable for them for whose sake it is also tilled, receives blessing from God;
Heb 6:8 but if it bears thorns and thistles, it is rejected and near being cursed, whose end is to be burned.
Heb 6:9 But, beloved, we are persuaded of better things for you, and things that accompany salvation, even though we speak like this.
Heb 6:10 For God is not unrighteous, so as to forget your work and the labor of love which you showed toward his name, in that you served the saints, and still do serve them.
Heb 6:11 We desire that each one of you may show the same diligence to the fullness of hope even to the end,
Heb 6:12 that you won't be sluggish, but imitators of those who through faith and patience inherited the promises.
Heb 6:13 For when God made a promise to Abraham, since he could swear by none greater, he swore by himself,
Heb 6:14 saying, "Surely blessing I will bless you, and multiplying I will multiply you."
Heb 6:15 Thus, having patiently endured, he obtained the promise.
Heb 6:16 For men indeed swear by a greater one, and in every dispute of theirs the oath is final for confirmation.
Heb 6:17 In this way God, being determined to show more abundantly to the heirs of the promise the immutability of his counsel, interposed with an oath;
Heb 6:18 that by two immutable things, in which it is impossible for God to lie, we may have a strong encouragement, who have fled for refuge to take hold of the hope set before us.
Heb 6:19 This hope we have as an anchor of the soul, a hope both sure and steadfast and entering into that which is within the veil;
Heb 6:20 where as a forerunner Jesus entered for us, having become a high priest forever after the order of Melchizedek.

The Story of Ruth by Mark Copeland