As you see it 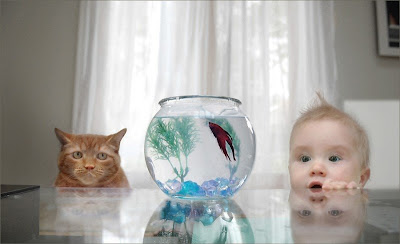 The object in the center may be a fishbowl, but its not the bowl, its the fish INSIDE THE BOWL that is center stage. The cat is probably thinking about lunch, but I wonder what thoughts are going through the baby's mind. I remember when one of my grandson's wanted a pet. He would ask his parents all the time for a pet. Every day it was the same thing; pet, pet, pet, pet, and on and on it went. Then one day his father bought a fish tank for himself. It was a beautiful thing, large and very nicely appointed... perfect. While his dad was in the backyard, my grandson thought he would play with the new fish, and the fish died. When my son-in-law asked him why he killed the fish, he said it was an accident; he didn't want to kill the fish, ONLY PET IT. This is exactly what he did... HE PET THE FISH! He didn't realize that petting the fish would do any harm so he was surprised when the fish died. Its amazing to me that two people look at the same thing and see it in completely different ways. Consider this passage from the book of Titus for a moment.

Tit 1:15 To the pure, all things are pure; but to those who are defiled and unbelieving, nothing is pure; but both their mind and their conscience are defiled.
Tit 1:16 They profess that they know God, but by their works they deny him, being abominable, disobedient, and unfit for any good work.
World English Bible

If your mind is set on worldly things, or evil things, or sinful things, that is the lens through which you will see things through. Everything will be that way for you and you will expect others to be the same as yourself. But if your mind is innocent, pure and Godly you will think that way. The choice is up to you; how do you see things before you, good or bad? If its not good, maybe your fishbowl needs to be turned a bit in order to see the other side!
Email ThisBlogThis!Share to TwitterShare to FacebookShare to Pinterest

It will make your hair stand on end 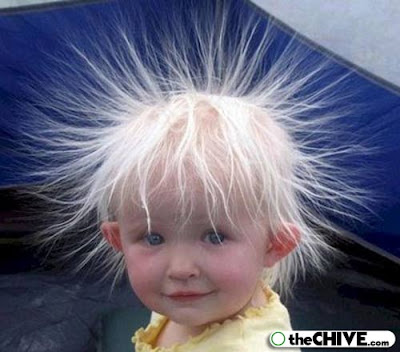 Somebody has been rubbing a cat just a little too much to produce this amount of static electricity! Whatever the cause its cute to look at. Sometimes scary stories will make your hair stand on edge too and there are some of those in the Bible; this one from the book of Judges is especially gruesome! So, don't read on if this sort of thing bothers you.
Jdg 19:15 They turned aside there, to go in to lodge in Gibeah: and he went in, and sat him down in the street of the city; for there was no man who took them into his house to lodge.
Jdg 19:16 Behold, there came an old man from his work out of the field at even: now the man was of the hill country of Ephraim, and he sojourned in Gibeah; but the men of the place were Benjamites.
Jdg 19:17 He lifted up his eyes, and saw the wayfaring man in the street of the city; and the old man said, Where are you going? Where did you come from?
Jdg 19:18 He said to him, We are passing from Bethlehem Judah to the farther side of the hill country of Ephraim; from there am I, and I went to Bethlehem Judah: and I am now going to the house of Yahweh; and there is no man who takes me into his house.
Jdg 19:19 Yet there is both straw and provender for our donkeys; and there is bread and wine also for me, and for your handmaid, and for the young man who is with your servants: there is no want of anything.
Jdg 19:20 The old man said, Peace be to you; howsoever let all your wants lie on me; only don't lodge in the street.
Jdg 19:21 So he brought him into his house, and gave the donkeys fodder; and they washed their feet, and ate and drink.
Jdg 19:22 As they were making their hearts merry, behold, the men of the city, certain base fellows, surrounded the house, beating at the door; and they spoke to the master of the house, the old man, saying, Bring forth the man who came into your house, that we may know him.
Jdg 19:23 The man, the master of the house, went out to them, and said to them, No, my brothers, please don't act so wickedly; seeing that this man is come into my house, don't do this folly.
Jdg 19:24 Behold, here is my daughter a virgin, and his concubine; them I will bring out now, and humble them, and do with them what seems good to you: but to this man don't do any such folly.
Jdg 19:25 But the men wouldn't listen to him: so the man laid hold on his concubine, and brought her forth to them; and they knew her, and abused her all the night until the morning: and when the day began to spring, they let her go.
Jdg 19:26 Then came the woman in the dawning of the day, and fell down at the door of the man's house where her lord was, until it was light.
Jdg 19:27 Her lord rose up in the morning, and opened the doors of the house, and went out to go his way; and behold, the woman his concubine was fallen down at the door of the house, with her hands on the threshold.
Jdg 19:28 He said to her, Up, and let us be going; but none answered: then he took her up on the donkey; and the man rose up, and got him to his place.
Jdg 19:29 When he was come into his house, he took a knife, and laid hold on his concubine, and divided her, limb by limb, into twelve pieces, and sent her throughout all the borders of Israel.
World English Bible
Frankly, I don't think I fully understand the obligation to guests in Israel; it seems just a little TOO PROTECTIVE AND BEYOND REASON. However, it is what it is and attempted rape of the man and the gang rape (and murder) of the concubine is horrendous! The dismemberment of the concubine and the "message" her parts conveyed is gruesome indeed. Remember, Israel was to have been HOLY TO THE LORD and this incident caused the other tribes to almost wipe out Benjamin (Chapter 20). If this bothers you, try to imagine how God must have felt when such a thing could happen among his chosen people. I wonder if it made his hair stand on end?
Email ThisBlogThis!Share to TwitterShare to FacebookShare to Pinterest
Newer Posts Older Posts Home
Subscribe to: Posts (Atom)