Additives, preservatives and sugar, oh my! 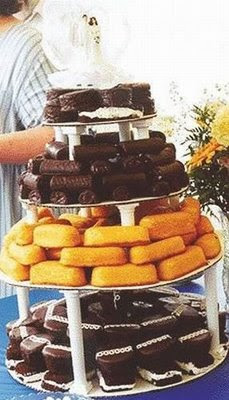 The caption said "Red neck wedding cake" but if you like it... enjoy. Actually, I think I have had everything on this "cake" and if you don't think too hard about all the additives, preservatives and sugar, well its not too bad. Now, don't get me wrong, this is NOT DIET FOOD! I love to eat, but these things aren't normally on my list. I can say without a doubt that they are NOT ON MY WIFE'S LIST. However, this does bring up an interesting topic, which the Bible does discuss in the book of Romans.
Rom 14:1 Now accept one who is weak in faith, but not for disputes over opinions.
Rom 14:2 One man has faith to eat all things, but he who is weak eats only vegetables.
Rom 14:3 Don't let him who eats despise him who doesn't eat. Don't let him who doesn't eat judge him who eats, for God has accepted him.
Rom 14:4 Who are you who judge another's servant? To his own lord he stands or falls. Yes, he will be made to stand, for God has power to make him stand.
Rom 14:5 One man esteems one day as more important. Another esteems every day alike. Let each man be fully assured in his own mind.
Rom 14:6 He who observes the day, observes it to the Lord; and he who does not observe the day, to the Lord he does not observe it. He who eats, eats to the Lord, for he gives God thanks. He who doesn't eat, to the Lord he doesn't eat, and gives God thanks.
Rom 14:7 For none of us lives to himself, and none dies to himself.
Rom 14:8 For if we live, we live to the Lord. Or if we die, we die to the Lord. If therefore we live or die, we are the Lord's.
Rom 14:9 For to this end Christ died, rose, and lived again, that he might be Lord of both the dead and the living.
Rom 14:10 But you, why do you judge your brother? Or you again, why do you despise your brother? For we will all stand before the judgment seat of Christ.
Rom 14:11 For it is written, " 'As I live,' says the Lord, 'to me every knee will bow. Every tongue will confess to God.' "
Rom 14:12 So then each one of us will give account of himself to God.
Rom 14:13 Therefore let's not judge one another any more, but judge this rather, that no man put a stumbling block in his brother's way, or an occasion for falling.
Rom 14:14 I know, and am persuaded in the Lord Jesus, that nothing is unclean of itself; except that to him who considers anything to be unclean, to him it is unclean.
Rom 14:15 Yet if because of food your brother is grieved, you walk no longer in love. Don't destroy with your food him for whom Christ died.
World English Bible

In ancient times food was offered to the "Gods" and later sold in the meat market. So, some early Christians wouldn't eat meat because it MIGHT have been an offering. Likewise, many first century believers had been Jewish and still wanted to observe Jewish holy days. Where do we draw the line; what do we do? Give people the benefit of the doubt and some latitude. Does this mean anything goes and we can do ANYTHING WE WANT? No, for I believe we should use the New Testament as our standard and if we go beyond that we are on shaky ground indeed. The bottom line is that I don't answer for you; all I really can do is to encourage you to think about how you apply the New Testament teachings in your walk with God. I have to give an account for what I do and hope some of what I say might make sense to you as it does to me. This is a very good starting point and who knows, you and I might actually agree on many, many things and grow to accept more about each other. Please don't ask me to eat a twinky though, my doctor would have a fit.
Email ThisBlogThis!Share to TwitterShare to FacebookShare to Pinterest
Newer Posts Older Posts Home
Subscribe to: Posts (Atom)