A bad day, a good day and a best day 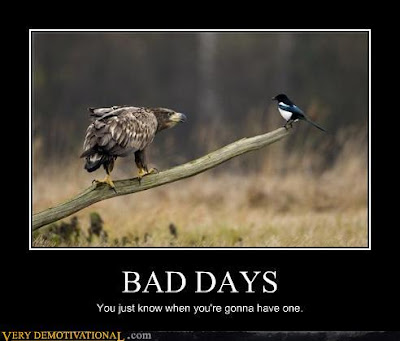 Yesterday I had a really good day!!!  Surprising, because usually Tuesday's are shall we say "less than wonderful".  Linda and I went to the movies (New Twilight movie) with some friends, then to the Olive Garden in New Tampa and finally came home, watched TV and chatted.  Good movie, good food and pleasant company; who could ask for more?  Most days are not that good, (although they are much better, now that I am retired) and some are downright rotten.  Question: How do you tell a bad day from a really good one?  If you are the bird in the picture, the answer is simple, today you may die.  But what about the rest of us?  I wonder, what are some different types of days in the Bible?
"Bad day"
WEB: Matthew Chapter 27
[32] As they came out, they found a man of Cyrene, Simon by name, and they compelled him to go with them, that he might carry his cross. [33] They came to a place called “Golgotha,” that is to say, “The place of a skull.” [34] They gave him sour wine to drink mixed with gall. When he had tasted it, he would not drink. [35] When they had crucified him, they divided his clothing among them, casting lots, [36] and they sat and watched him there. [37] They set up over his head the accusation against him written, “THIS IS JESUS, THE KING OF THE JEWS.”
"Good Day"
WEB: Matthew Chapter 28
[1] Now after the Sabbath, as it began to dawn on the first day of the week, Mary Magdalene and the other Mary came to see the tomb. [2] Behold, there was a great earthquake, for an angel of the Lord descended from the sky, and came and rolled away the stone from the door, and sat on it. [3] His appearance was like lightning, and his clothing white as snow. [4] For fear of him, the guards shook, and became like dead men. [5] The angel answered the women, “Don’t be afraid, for I know that you seek Jesus, who has been crucified. [6] He is not here, for he has risen, just like he said. Come, see the place where the Lord was lying. [7] Go quickly and tell his disciples, ‘He has risen from the dead, and behold, he goes before you into Galilee; there you will see him.’ Behold, I have told you.”

[8] They departed quickly from the tomb with fear and great joy, and ran to bring his disciples word.
"Best Day"
WEB: I Thessalonians Chapter 4
[13] But we don’t want you to be ignorant, brothers, concerning those who have fallen asleep, so that you don’t grieve like the rest, who have no hope. [14] For if we believe that Jesus died and rose again, even so God will bring with him those who have fallen asleep in Jesus. [15] For this we tell you by the word of the Lord, that we who are alive, who are left to the coming of the Lord, will in no way precede those who have fallen asleep. [16] For the Lord himself will descend from heaven with a shout, with the voice of the archangel, and with God’s trumpet. The dead in Christ will rise first, [17] then we who are alive, who are left, will be caught up together with them in the clouds, to meet the Lord in the air. So we will be with the Lord forever. [18] Therefore comfort one another with these words.


First of all, rating days is a matter of perspective.  What may seem to be bad today, may, in the long run prove really wonderful.  As an example, here is something that actually happened to me.  I was sixteen and playing soccer in gym class.  Two of us kicked the ball at the same time and my left knee went out of joint.  The pain was terrible and my left leg was wrapped like a mummy for almost nine months.  Yet, something good came from it; Linda carried my books for me, we went steady and eventually married (43 years so far).  Something bad became something good.  So, in our "bad day" example, Jesus is crucified.  Awful way to die.  You just don't get worse than that!!!  But, where would we be if Jesus had not died?  Without a remedy for our sin and that would be a really bad day for US!!!  So, bad means good for a follower of Jesus!  Not bad for a bad day!!!  Next, we have a "good day".  Not just a day filled with pleasantness (like yesterday) but a life changing, EARTH SHAKING EVENT!!!  Jesus rose from the grave!!!  God showed us that we can really have hope!!!  If Jesus can have life after death, so can we.  Now, that's a GOOD DAY!!!  Last, we have the "Best day".  Jesus comes again.  If we are still on the Earth when he comes again, we will actually see the things we have believed all our lives and be changed.  Our faith will be proven right before our eyes.  Now, that is the best day I can think of.  The little bird in the picture above is having a "bad day" because its facing a certain death and there is really no way out.  But, WE HAVE ONE and his name is Jesus!  So, I ask you: Can we ever really have a bad day?  Don't bother to answer, if you are a follower of Jesus, you already know the answer to that one!!!!!!!!!!
Email ThisBlogThis!Share to TwitterShare to FacebookShare to Pinterest
Newer Posts Older Posts Home
Subscribe to: Posts (Atom)