More than silver or gold 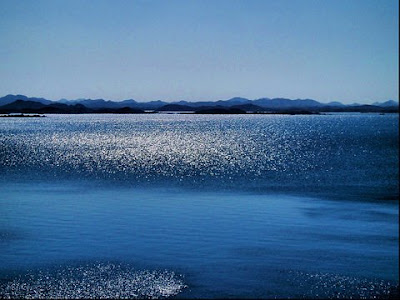 This sparkling picture reminds me of something from many years past. I remember the sparkle in Linda's eye the day she told me that we were going to have our first child. That look will stay with me forever! It was as if it she was having her first birthday party and had been given the best gift she could ever have! The love I saw must in some way be like the way God felt about Israel because HE did everything he could to protect them. This passage from the book of Numbers tells the tale.
Num 22:1 The children of Israel traveled, and encamped in the plains of Moab beyond the Jordan at Jericho.
Num 22:2 Balak the son of Zippor saw all that Israel had done to the Amorites.
Num 22:3 Moab was sore afraid of the people, because they were many: and Moab was distressed because of the children of Israel.
Num 22:4 Moab said to the elders of Midian, Now will this multitude lick up all that is around us, as the ox licks up the grass of the field. Balak the son of Zippor was king of Moab at that time.
Num 22:5 He sent messengers to Balaam the son of Beor, to Pethor, which is by the River, to the land of the children of his people, to call him, saying, Behold, there is a people come out from Egypt: behold, they cover the surface of the earth, and they abide over against me.
Num 22:6 Please come now therefore curse me this people; for they are too mighty for me: peradventure I shall prevail, that we may strike them, and that I may drive them out of the land; for I know that he whom you bless is blessed, and he whom you curse is cursed.
Num 22:7 The elders of Moab and the elders of Midian departed with the rewards of divination in their hand; and they came to Balaam, and spoke to him the words of Balak.
Num 22:8 He said to them, Lodge here this night, and I will bring you word again, as Yahweh shall speak to me: and the princes of Moab abode with Balaam.
Num 22:9 God came to Balaam, and said, What men are these with you?
Num 22:10 Balaam said to God, Balak the son of Zippor, king of Moab, has sent to me, saying,
Num 22:11 Behold, the people that is come out of Egypt, it covers the surface of the earth: now, come curse me them; peradventure I shall be able to fight against them, and shall drive them out.
Num 22:12 God said to Balaam, You shall not go with them; you shall not curse the people; for they are blessed.
Num 22:13 Balaam rose up in the morning, and said to the princes of Balak, Go to your land; for Yahweh refuses to permit me to go with you.
Num 22:14 The princes of Moab rose up, and they went to Balak, and said, Balaam refuses to come with us.
Num 22:15 Balak sent yet again princes, more, and more honorable than they.
Num 22:16 They came to Balaam, and said to him, Thus says Balak the son of Zippor, Please let nothing hinder you from coming to me:
Num 22:17 for I will promote you to very great honor, and whatever you say to me I will do. Please come therefore, and curse this people for me.
Num 22:18 Balaam answered the servants of Balak, If Balak would give me his house full of silver and gold, I can't go beyond the word of Yahweh my God, to do less or more. WEB
God loved Israel and blessed them. No one could stand before them and their enemies knew it. So Balak tried to bribe Balaam to curse Israel. Balaam realized something I wish we all could; that some things are worth more than silver and gold. If the shimmer on the water and the twinkle in my wife's eye can mean so much, then how much more blessed will I be if I listen to the words of God and do them. Besides, Habakkuk teaches us that God owns all the silver and gold anyway (2:8).
Email ThisBlogThis!Share to TwitterShare to FacebookShare to Pinterest 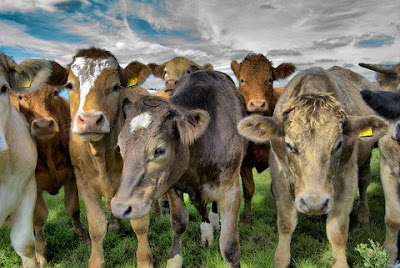 If my brother Dave sees this, I think he would say: "nice cows"! He has always loved raising animals and definitely has a knack for it. Not me! One cow looks pretty much like another to me. So, I guess I just don't get it! A lot of people would do almost anything to be just one of the group. Call it a herd complex mentality or whatever you want to, but it exists. When it comes to following God, you can't do this; here is an example of someone from the Bible who tried and failed.
1Sa 15:1 Samuel said to Saul, Yahweh sent me to anoint you to be king over his people, over Israel: now therefore listen you to the voice of the words of Yahweh.
1Sa 15:2 Thus says Yahweh of Armies, I have marked that which Amalek did to Israel, how he set himself against him in the way, when he came up out of Egypt.
1Sa 15:3 Now go and strike Amalek, and utterly destroy all that they have, and don't spare them; but kill both man and woman, infant and suckling, ox and sheep, camel and donkey.
1Sa 15:4 Saul summoned the people, and numbered them in Telaim, two hundred thousand footmen, and ten thousand men of Judah.
1Sa 15:5 Saul came to the city of Amalek, and laid wait in the valley.
1Sa 15:6 Saul said to the Kenites, Go, depart, go down from among the Amalekites, lest I destroy you with them; for you showed kindness to all the children of Israel, when they came up out of Egypt. So the Kenites departed from among the Amalekites.
1Sa 15:7 Saul struck the Amalekites, from Havilah as you go to Shur, that is before Egypt.
1Sa 15:8 He took Agag the king of the Amalekites alive, and utterly destroyed all the people with the edge of the sword.
1Sa 15:9 But Saul and the people spared Agag, and the best of the sheep, and of the cattle, and of the fatlings, and the lambs, and all that was good, and wouldn't utterly destroy them: but everything that was vile and refuse, that they destroyed utterly.
and
1Sa 15:13 Samuel came to Saul; and Saul said to him, Blessed are you by Yahweh: I have performed the commandment of Yahweh.
1Sa 15:14 Samuel said, What means then this bleating of the sheep in my ears, and the lowing of the cattle which I hear?
1Sa 15:15 Saul said, They have brought them from the Amalekites: for the people spared the best of the sheep and of the cattle, to sacrifice to Yahweh your God; and the rest we have utterly destroyed.
1Sa 15:16 Then Samuel said to Saul, Stay, and I will tell you what Yahweh has said to me this night. He said to him, Say on.
1Sa 15:17 Samuel said, "Though you were little in your own sight, weren't you made the head of the tribes of Israel? Yahweh anointed you king over Israel;
1Sa 15:18 and Yahweh sent you on a journey, and said, 'Go, and utterly destroy the sinners the Amalekites, and fight against them until they are consumed.'
1Sa 15:19 Why then didn't you obey the voice of Yahweh, but flew on the spoil, and did that which was evil in the sight of Yahweh?"
1Sa 15:20 Saul said to Samuel, Yes, I have obeyed the voice of Yahweh, and have gone the way which Yahweh sent me, and have brought Agag the king of Amalek, and have utterly destroyed the Amalekites.
1Sa 15:21 But the people took of the spoil, sheep and cattle, the chief of the devoted things, to sacrifice to Yahweh your God in Gilgal.
1Sa 15:22 Samuel said, Has Yahweh as great delight in burnt offerings and sacrifices, as in obeying the voice of Yahweh? Behold, to obey is better than sacrifice, and to listen than the fat of rams. World English Bible
There are times when going along with the group will get you into BIG TROUBLE and this episode from the book of first Samuel was one of them. God wants obedience, not will-worship! If the Bible says to do something, do it and don't worry what people think. It has been my experience that those people who really matter will try to understand. This doesn't mean that you should not be sensitive to the feelings of others, it just means you should have the right attitude towards God, first and foremost. So the next time your conscience tells you to do the right thing, don't be herded the wrong way; instead be bullish on God and follow his words; besides who likes crowds, anyway!
Email ThisBlogThis!Share to TwitterShare to FacebookShare to Pinterest
Newer Posts Older Posts Home
Subscribe to: Posts (Atom)