The oddest thing happened the other day.... 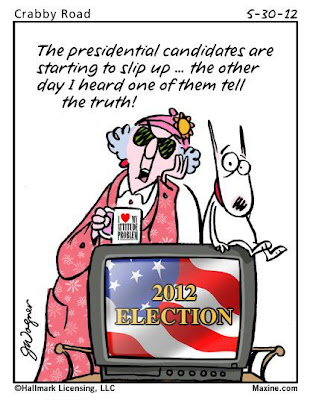 Pontius Pilate said: What is truth? Today, THE TRUTH is a hard thing to come by.  This has been made very clear to me recently by all the political ads on television.  Truth, half-truth, distortion, innuendo and outright boldfaced lies almost become indistinguishable.  Truth gets put through a leftist or rightist prism, becomes twisted and manipulated until its unrecognizable!!! When a candidate says something that is so obviously wrong that it is undeniable, then they deny it or claim its content will explain it the way they want it explained.  Look at all the harm this does to our society.  People learn its OK to lie, OK to hurt one's neighbor.  Remember this commandment....

Deuteronomy, Chapter 5
20 “Neither shall you give false testimony against your neighbor.

... its broken ALL THE TIME!!!  Oh, how nice it would be if the cartoon were true!!!  Somehow, I just can't reconcile it to reality!!!  After all, it still doesn't make sense to me that candidates would spend millions upon millions of dollars (I think one of the candidates actually has a BILLION dollar war-chest) to get a job that pays a few hundred thousand dollars.  There must be something extra involved.  Only thing, I just can not seem to remember how to spell c-o-r-r-u-p-t-i-o-n properly.  Every time I do, the spell checker simple goes nuts.  Maybe I should install either a Democrat or Republican one... but no, that wouldn't work either... then the word TRUTH won't GET CHECKED!!!!
Email ThisBlogThis!Share to TwitterShare to FacebookShare to Pinterest

"THE EPISTLE TO THE GALATIANS" Chapter Three by Mark Copeland