Hypocrisy on a massive scale!!! 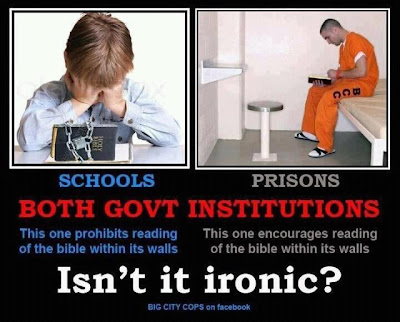 Yesterday I saw the statistics for my blog for July and I was a bit surprised!!!  During the past three months, the number of the people accessing my blog post has risen from an average of about 1000 to over 1500.  The cause for this is simple: a new audience has found what I do; Russia.  Why? That is a question I have been asking myself for sometime.  I am not Russian and as far as I can tell and I don't think "Russian".  The best explanation I can come up with is that there is a spiritual revival occurring there.  Why? Again, I have pondered this question.  To me, Eastern European Missions is the answer.  This is a group that gives a Bible to anyone who wants one; for FREE!!!  Within the past year or so, this group was given permission to distribute Bibles in the public schools.  And so when I saw this picture in my collection, I was reminded of the terrible situation that has befallen this nation: the government has systematically been eliminating God from our institutions.  What better place for them to start with our young.  Teach them that there are no real "values", that every one's belief (no matter how perverse or outlandish) is correct and that the Bible is to be avoided at all costs.  Its no wonder this country has been on the decline.  More than that, THE GOVERNMENT IS  is a hypocrite!!!! Eliminate the Bible from the young who need guidance, but allow it for the criminal who needs "correction".  How often have I heard people call Christians hypocrites in order to justify there own sin.  Jesus puts it this way....

If you refuse to listen to Jesus, then how about our finest president; George Washington!!!  The quote on the tee shirt says it all!!!!! 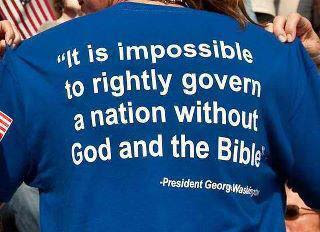 Yesterday, there was an outpouring of support for Chic-o-fil, a business whose director openly supports Biblical teachings and has been persecuted by United States government for it.  I call on every God-fearing citizen to express their dissatisfaction with our rulers in the upcoming election by voting for only those who support this little tee shirt message.  There are millions up millions of us and its time to take back America from the ungodly!!!  After this is accomplished, we need to put the Bible back in our schools and when we do, America will become a moral nation again.  I look forward to the revival!!!

2Ch 31:1 Now when all this was finished, all Israel who were present went out to the cities of Judah, and broke in pieces the pillars, and cut down the Asherim, and broke down the high places and the altars out of all Judah and Benjamin, in Ephraim also and Manasseh, until they had destroyed them all. Then all the children of Israel returned, every man to his possession, into their own cities.
2Ch 31:2 Hezekiah appointed the divisions of the priests and the Levites after their divisions, every man according to his service, both the priests and the Levites, for burnt offerings and for peace offerings, to minister, and to give thanks, and to praise in the gates of the camp of Yahweh.
2Ch 31:3 He appointed also the king's portion of his substance for the burnt offerings, to wit, for the morning and evening burnt offerings, and the burnt offerings for the Sabbaths, and for the new moons, and for the set feasts, as it is written in the law of Yahweh.
2Ch 31:4 Moreover he commanded the people who lived in Jerusalem to give the portion of the priests and the Levites, that they might give themselves to the law of Yahweh.
2Ch 31:5 As soon as the commandment came abroad, the children of Israel gave in abundance the first fruits of grain, new wine, and oil, and honey, and of all the increase of the field; and the tithe of all things brought they in abundantly.
2Ch 31:6 The children of Israel and Judah, who lived in the cities of Judah, they also brought in the tithe of cattle and sheep, and the tithe of dedicated things which were consecrated to Yahweh their God, and laid them by heaps.
2Ch 31:7 In the third month they began to lay the foundation of the heaps, and finished them in the seventh month.
2Ch 31:8 When Hezekiah and the princes came and saw the heaps, they blessed Yahweh, and his people Israel.
2Ch 31:9 Then Hezekiah questioned the priests and the Levites concerning the heaps.
2Ch 31:10 Azariah the chief priest, of the house of Zadok, answered him and said, Since the people began to bring the offerings into the house of Yahweh, we have eaten and had enough, and have left plenty: for Yahweh has blessed his people; and that which is left is this great store.
2Ch 31:11 Then Hezekiah commanded to prepare chambers in the house of Yahweh; and they prepared them.
2Ch 31:12 They brought in the offerings and the tithes and the dedicated things faithfully: and over them Conaniah the Levite was ruler, and Shimei his brother was second.
2Ch 31:13 Jehiel, and Azaziah, and Nahath, and Asahel, and Jerimoth, and Jozabad, and Eliel, and Ismachiah, and Mahath, and Benaiah, were overseers under the hand of Conaniah and Shimei his brother, by the appointment of Hezekiah the king, and Azariah the ruler of the house of God.
2Ch 31:14 Kore the son of Imnah the Levite, the porter at the east gate, was over the freewill offerings of God, to distribute the offerings of Yahweh, and the most holy things.
2Ch 31:15 Under him were Eden, and Miniamin, and Jeshua, and Shemaiah, Amariah, and Shecaniah, in the cities of the priests, in their office of trust, to give to their brothers by divisions, as well to the great as to the small:
2Ch 31:16 besides those who were reckoned by genealogy of males, from three years old and upward, even everyone who entered into the house of Yahweh, as the duty of every day required, for their service in their offices according to their divisions;
2Ch 31:17 and those who were reckoned by genealogy of the priests by their fathers' houses, and the Levites from twenty years old and upward, in their offices by their divisions;
2Ch 31:18 and those who were reckoned by genealogy of all their little ones, their wives, and their sons, and their daughters, through all the congregation: for in their office of trust they sanctified themselves in holiness.
2Ch 31:19 Also for the sons of Aaron the priests, who were in the fields of the suburbs of their cities, in every city, there were men who were mentioned by name, to give portions to all the males among the priests, and to all who were reckoned by genealogy among the Levites.
2Ch 31:20 Hezekiah did so throughout all Judah; and he worked that which was good and right and faithful before Yahweh his God.
2Ch 31:21 In every work that he began in the service of the house of God, and in the law, and in the commandments, to seek his God, he did it with all his heart, and prospered.

"THE EPISTLE TO THE GALATIANS" Introduction