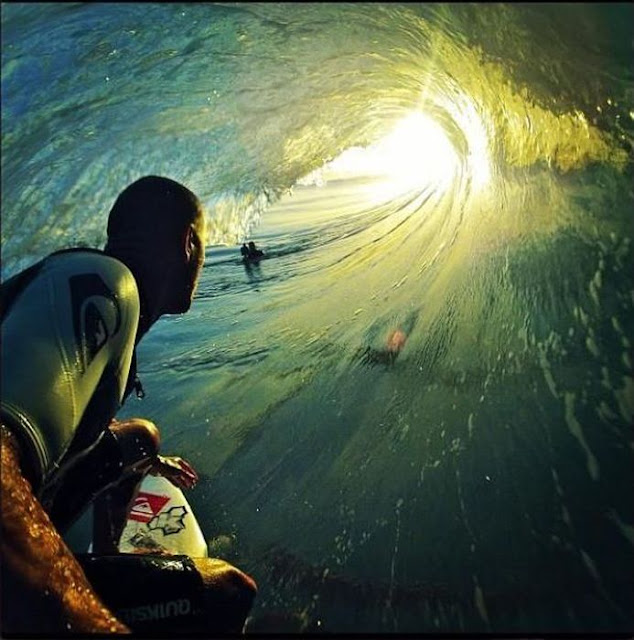 This must be a wonderful experience; imagine, being a watery tunnel, headed for the light!!!  Eager expectation, wonder, apprehension and excitement coupled with concentration on maneuvering your surfboard all at the same time.  But, many, many people have experienced something similar... at or near death.  So, in a way this is not-so-uncommon after all.  Yet, there is another sort of experience that is quite similar, but less talked about today.  It comes from events recounted in the book of John...

John Chapter 8  1 but Jesus went to the Mount of Olives. 2 Now very early in the morning, he came again into the temple, and all the people came to him. He sat down, and taught them.  3 The scribes and the Pharisees brought a woman taken in adultery. Having set her in the midst, 4 they told him, “Teacher, we found this woman in adultery, in the very act. 5 Now in our law, Moses commanded us to stone such.   What then do you say about her?”  6 They said this testing him, that they might have something to accuse him of.But Jesus stooped down, and wrote on the ground with his finger.  7 But when they continued asking him, he looked up and said to them, "“He who is without sin among you, let him throw the first stone at her.”"  8 Again he stooped down, and with his finger wrote on the ground.

9 They, when they heard it, being convicted by their conscience, went out one by one, beginning from the oldest, even to the last. Jesus was left alone with the woman where she was, in the middle.  10 Jesus, standing up, saw her and said, "“Woman, where are your accusers? Did no one condemn you?”"

Jesus said, "“Neither do I condemn you. Go your way. From now on, sin no more.”"

12 Again, therefore, Jesus spoke to them, saying, "“I am the light of the world. He who follows me will not walk in the darkness, but will have the light of life.”"

Adultery, now that is a word that is not used much today.  Sex outside of the marriage bond destroys lives.  People use words like "an affair" or a "dalliance" or a "love affair" to soften the blow of what this action does a marriage, but no matter how you attempt to assuage it, it still does horrible things.  To the situation, Jesus comes and shows a way out... the light of the wisdom of following God; of following the way that Jesus shows is correct.  Get on the path to this light and never, ever, look back.  Jesus is waiting for you to start today and also waiting for your final day when you take that last tunnel journey to the eternal light in heaven.  Why wait????

"ACTS OF THE APOSTLES" Introduction by Mark Copeland