The power and the blessing 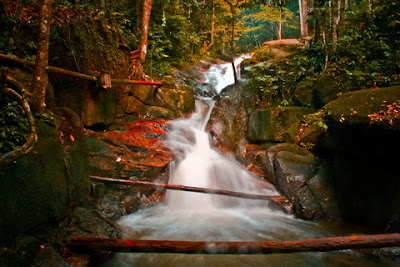 This picture reminds me of the up-state New York Adirondack's. Many years ago my in-laws had a camp near Newcomb and I remember streams just like this one. If you stood by it, you could hear the rushing water and get a sense of the real power that was there. The forest would come alive with the sound of it and it seemed like a symphony to me. Clear refreshing water was in those streams and when coupled with the smell of the surrounding forest, it produced an overall well-being as nothing I had ever experienced before. I thought of the following passage from the book of John; I hope you enjoy it!
John 4:5-29
5 So he came to a city of Samaria, called Sychar, near the parcel of ground that Jacob gave to his son, Joseph.6 Jacob's well was there. Jesus therefore, being tired from his journey, sat down by the well. It was about the sixth hour .7 A woman of Samaria came to draw water. Jesus said to her, "Give me a drink."8 For his disciples had gone away into the city to buy food.9 The Samaritan woman therefore said to him, "How is it that you, being a Jew, ask for a drink from me, a Samaritan woman?" (For Jews have no dealings with Samaritans.)10 Jesus answered her, "If you knew the gift of God, and who it is who says to you, 'Give me a drink,' you would have asked him, and he would have given you living water."11 The woman said to him, "Sir, you have nothing to draw with, and the well is deep. From where then have you that living water?12 Are you greater than our father, Jacob, who gave us the well, and drank of it himself, as did his children, and his livestock?"13 Jesus answered her, "Everyone who drinks of this water will thirst again,14 but whoever drinks of the water that I will give him will never thirst again; but the water that I will give him will become in him a well of water springing up to eternal life."15 The woman said to him, "Sir, give me this water, so that I don't get thirsty, neither come all the way here to draw."16 Jesus said to her, "Go, call your husband, and come here."17 The woman answered, "I have no husband." Jesus said to her, "You said well, 'I have no husband,'18 for you have had five husbands; and he whom you now have is not your husband. This you have said truly."19 The woman said to him, "Sir, I perceive that you are a prophet.20 Our fathers worshiped in this mountain, and you Jews say that in Jerusalem is the place where people ought to worship."21 Jesus said to her, "Woman, believe me, the hour comes, when neither in this mountain, nor in Jerusalem, will you worship the Father.22 You worship that which you don't know. We worship that which we know; for salvation is from the Jews.23 But the hour comes, and now is, when the true worshippers will worship the Father in spirit and truth, for the Father seeks such to be his worshippers.24 God is spirit, and those who worship him must worship in spirit and truth."25 The woman said to him, "I know that Messiah comes," (he who is called Christ). "When he has come, he will declare to us all things."26 Jesus said to her, "I am he, the one who speaks to you."27 At this, his disciples came. They marveled that he was speaking with a woman; yet no one said, "What are you looking for?" or, "Why do you speak with her?"28 So the woman left her water pot, and went away into the city, and said to the people,29 "Come, see a man who told me everything that I did. Can this be the Christ?"WEB
Different country, different time, a strange meeting and possibility was at Sycar. Jesus spoke to this woman and challenged her in many ways; especially with the concept of living water. He intrigued her with the thought of water that will be of eternal value and of his own identity. She went away puzzled, but her curiosity led many to seek out Jesus. It has always been interesting to me that the more you come to know him, the more there is to know. Such are the depths of the knowledge of God. What is certain is that his gifts reflect his nature and that is eternal. Those who really seek God will find him and experience the power and blessing that only HE can provide.
Email ThisBlogThis!Share to TwitterShare to FacebookShare to Pinterest
Newer Posts Older Posts Home
Subscribe to: Posts (Atom)