More than a rainbow 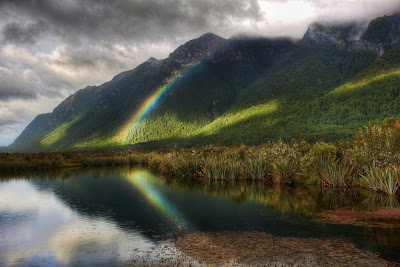 This picture of New Zealand is a little unusual because the rainbow looks like it just sets on the mountain and that the reflection in the water IS THE MOUNTAIN with a rainbow in it. Of course it is an optical illusion; the rainbow is just slightly above the mountain and both the rainbow and the mountain are see in. You just have to look closely to see it. Some things are indeed hard to see and even harder to believe, but the effort is worth it.
Josh 10:7-14 (WEB)
10:7 So Joshua went up from Gilgal, he, and all the people of war with him, and all the mighty men of valor.
10:8 Yahweh said to Joshua, “Don’t fear them, for I have delivered them into your hands. Not a man of them will stand before you.”
10:9 Joshua therefore came on them suddenly. He went up from Gilgal all night.
10:10 Yahweh confused them before Israel, and he killed them with a great slaughter at Gibeon, and chased them by the way of the ascent of Beth Horon, and struck them to Azekah and to Makkedah.
10:11 It happened, as they fled from before Israel, while they were at the descent of Beth Horon, that Yahweh cast down great stones from the sky on them to Azekah, and they died. There were more who died from the hailstones than who the children of Israel killed with the sword.
10:12 Then Joshua spoke to Yahweh in the day when Yahweh delivered up the Amorites before the children of Israel; and he said in the sight of Israel, “Sun, stand still on Gibeon! You, moon, stop in the valley of Aijalon!”
10:13 The sun stood still, and the moon stayed, until the nation had avenged themselves of their enemies. Isn’t this written in the book of Jashar? The sun stayed in the midst of the sky, and didn’t hurry to go down about a whole day.
10:14 There was no day like that before it or after it, that Yahweh listened to the voice of a man; for Yahweh fought for Israel.

Israel was fighting against the Amorites (really a confederation of several kings) because the Gibeonites had tricked the elders of Israel into an alliance and Israel was coming to their aid. That in itself is just an ordinary event, but HOW IT WAS ACCOMPLISHED contained miracles. God fought for Israel by means of confusion and hailstones. More than that, God listened to Joshua and the sun and moon stood still until the victory was complete. I can't explain the miracles anymore than I can explain the rainbow in the picture, but one thing seems certain; it did happen and both are real. Sometimes you just have to set back and accept things by faith and this is one of those times. Anybody have a copy of the book of Jashar?
Email ThisBlogThis!Share to TwitterShare to FacebookShare to Pinterest
Newer Posts Older Posts Home
Subscribe to: Posts (Atom)