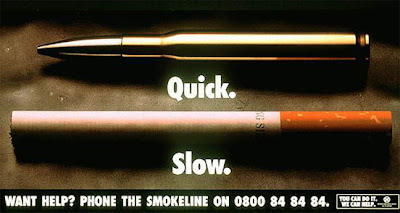 Death comes to us all; some more quickly than others. Its easy to understand that if you shoot yourself you WILL DIE, but not quite so obvious if you smoke. To be fair, some poeple who smoke live a long, long time, but I don't think that is the general rule. I know how hard it is to quit smoking and what happens when you quit. I was recently reminded of that during my recent recuperation from neck surgery. For about 6 weeks I was on oxycotin and when I realized I really needed to stop taking it, I found out what a pain addiction withdrawl was. Sin is like both smoking and prescription drugs. Its easy to see the big things like murder or rape and not so obvious in matters of "small" things, like bringing home a pen from work or telling a "white lie". Sin is what it is and with all the power in you... avoid it at all costs. Somehow this passage from John seemed to "fit".

John 5:9-14
9 Immediately, the man was made well, and took up his mat and walked. Now it was the Sabbath on that day.
10 So the Jews said to him who was cured, "It is the Sabbath. It is not lawful for you to carry the mat."
11 He answered them, "He who made me well, the same said to me, 'Take up your mat, and walk.'"
12 Then they asked him, "Who is the man who said to you, 'Take up your mat, and walk'?"
13 But he who was healed didn't know who it was, for Jesus had withdrawn, a crowd being in the place.
14 Afterward Jesus found him in the temple, and said to him, "Behold, you are made well. Sin no more, so that nothing worse happens to you." WEB

Ok, I didn't include the beginning of the passage when it mentioned the length of his sickness, but it was 38 years. If you have ever been sick for more than a few months, you know that something inside you changes as you continue in your sickness. Obviously, he had sinned because Jesus told him to sin no more. Face it; we all fall short of the mark, but we can and MUST do everything we are able to do to resist evil. Just like the anti-smoking ad above, tolerated sin will kill you. Take your pick, quick or slow?
Email ThisBlogThis!Share to TwitterShare to FacebookShare to Pinterest
Newer Posts Older Posts Home
Subscribe to: Posts (Atom)