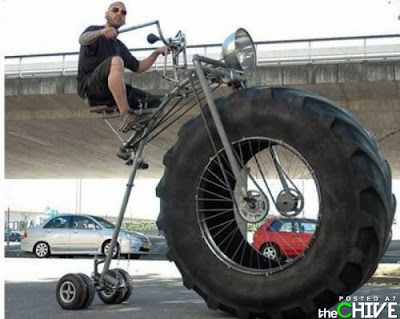 Big wheels again?  Why not?  Life is meant to be fun!!!  Never mind that his bicycle light shines a little too high to be of any use or that just getting on to the seat appears to be a challenge. This "out of his teens" man is having fun.  He has the biggest front tire I have ever seen on a bike and the only tandem rear wheels (however small) as well.  That he pedals it is retro and his bulb horn is nostalgic!!!
So, enjoy, because life is short!!!...
WEB: Ecclesiastes 11:9. Rejoice, young man, in your youth,
and let your heart cheer you in the days of your youth,
and walk in the ways of your heart,
and in the sight of your eyes;
but know that for all these things God will bring you into judgment.
Life can be very wonderful for the young (and young in heart)!!!  The world is open to possibilities for those with the right "attitude".  But, remember that you are not invincible, nor are you young forever.  Remember that what you do now will have consequences later.  If not in 40 or 50 or 60 years, then certainly when you leave this world and face the judgment.  Remember God, but live, enjoy and be happy!!!  Only be careful; its dangerous out there!!!  And OH, yes, please put a set of directionals on your bike... you never know when someone may not see you!!! Ha, Ha!!!!!
Email ThisBlogThis!Share to TwitterShare to FacebookShare to Pinterest

The Conversion of Saul by Mark Copeland

http://executableoutlines.com/top/saulconv.htm
One of the most notable events in history.... Gary
Email ThisBlogThis!Share to TwitterShare to FacebookShare to Pinterest
Newer Posts Older Posts Home
Subscribe to: Posts (Atom)