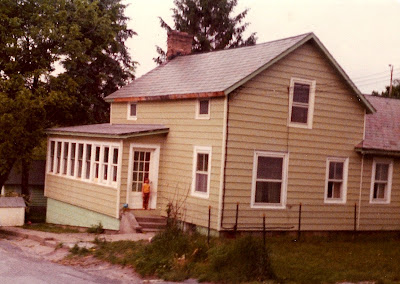 This was our first house in Valley Falls, N.Y.. It had a slate roof, hardwood floors, a massive concrete basement, a detached garage, a sun room, an enclosed front porch and a dog house. I won't tell you how much I paid for it, but today you could buy the cheapest economy car on the market and have a few thousand dollars left over, but I bought it in 1970, so prices have gone up some since then. When I look at this house, I don't think of all its attributes, but rather of the good times we had there, while we were growing up with our children. You can tell a lot about a house by the people who live there; Are they happy or mean or cheap or friendly or WHATEVER? Consider what sort of house would be fit for God to dwell in and then read this passage from the book of 1st Kings.
1Ki 8:1 Then Solomon assembled the elders of Israel, and all the heads of the tribes, the princes of the fathers' houses of the children of Israel, to king Solomon in Jerusalem, to bring up the ark of the covenant of Yahweh out of the city of David, which is Zion.
1Ki 8:2 All the men of Israel assembled themselves to king Solomon at the feast, in the month Ethanim, which is the seventh month.
1Ki 8:3 All the elders of Israel came, and the priests took up the ark.
1Ki 8:4 They brought up the ark of Yahweh, and the Tent of Meeting, and all the holy vessels that were in the Tent; even these did the priests and the Levites bring up.
1Ki 8:5 King Solomon and all the congregation of Israel, who were assembled to him, were with him before the ark, sacrificing sheep and cattle, that could not be counted nor numbered for multitude.
1Ki 8:6 The priests brought in the ark of the covenant of Yahweh to its place, into the oracle of the house, to the most holy place, even under the wings of the cherubim.
1Ki 8:7 For the cherubim spread forth their wings over the place of the ark, and the cherubim covered the ark and its poles above.
1Ki 8:8 The poles were so long that the ends of the poles were seen from the holy place before the oracle; but they were not seen outside: and there they are to this day.
1Ki 8:9 There was nothing in the ark save the two tables of stone which Moses put there at Horeb, when Yahweh made a covenant with the children of Israel, when they came out of the land of Egypt.
1Ki 8:10 It came to pass, when the priests were come out of the holy place, that the cloud filled the house of Yahweh,
1Ki 8:11 so that the priests could not stand to minister by reason of the cloud; for the glory of Yahweh filled the house of Yahweh.
The temple was beautiful, but its really not the house, but God that is worth considering. He created the entire universe, but chose to dwell there; why, because he loved Israel. If there is love in a house, it will be beautiful no matter what it looks like. Look at your own house today, does it say LOVE and does God dwell in the hearts of those who live there? If so, cherish that love for as long as you live!!!
Email ThisBlogThis!Share to TwitterShare to FacebookShare to Pinterest
Newer Posts Older Posts Home
Subscribe to: Posts (Atom)