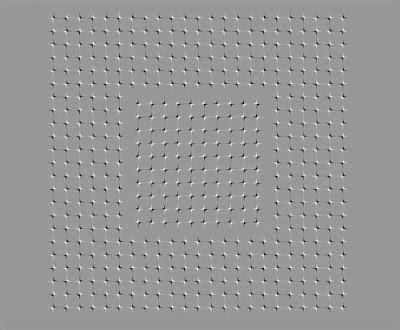 I don't really know WHY the center cluster of dots seem to move.  This is NOT a GIF (graphics in format [that moves]) file, but seems to move ANYWAY!  I discovered that if I concentrate very hard I can make it move less, but no matter what I do, THE CENTER DOTS STILL MOVE.  If someone out there has an explanation, please tell me.  As Yogi Berra said... "You can see a lot by looking".  Some things you need a little help seeing and here is a situation where God helped...

God allowed Elisha to see the chariot of fire and horses. And that whirlwind... wow!!!  Which means that Elisha saw a miracle and according to Elijah (verse 10) Elisha would be given a double portion of the spirit that Elijah had been given.  What we see is what we want to see and if God wills it, then there will be a blessing in the event.  Obviously, Elisha had the necessary faith and the things he did revealed God's double blessing up him.  Today, as you look at your life unfold before you, look for the presence of God there.  Look hard and you will be blessed with insight into how God is truly revealed in your life.  You may not see a miracle, but you undoubtedly will appreciate the life God has given you to a far greater degree.  Look, look and look some more, perhaps your life will come into focus.  By the way, don't look at the picture too long or concentrate too hard... I did, and got a headache!!!
Email ThisBlogThis!Share to TwitterShare to FacebookShare to Pinterest

"THE FIRST EPISTLE TO THE CORINTHIANS" Chapter Six by Mark Copeland