Good food... for a change 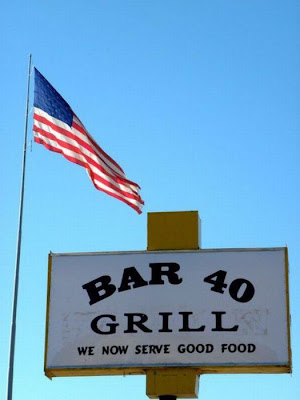 This looks like an actual location; I just wonder where it could be?  Anyway, whoever put this sign up needs to rethink their sales strategy.  If they serve good food now, what did they serve before this; bad food, terrible food, old food or how about disgusting food?  I think they mean that they have improved their menu; they have changed for the better!!!  Humm, that is something like what repentance means; a change (for the better)....
WEB: Acts Chapter 19

[11] God worked special miracles by the hands of Paul, [12] so that even handkerchiefs or aprons were carried away from his body to the sick, and the evil spirits went out. [13] But some of the itinerant Jews, exorcists, took on themselves to invoke over those who had the evil spirits the name of the Lord Jesus, saying, “We adjure you by Jesus whom Paul preaches.” [14] There were seven sons of one Sceva, a Jewish chief priest, who did this.

[15] The evil spirit answered, “Jesus I know, and Paul I know, but who are you?” [16] The man in whom the evil spirit was leaped on them, and overpowered them, and prevailed against them, so that they fled out of that house naked and wounded. [17] This became known to all, both Jews and Greeks, who lived at Ephesus. Fear fell on them all, and the name of the Lord Jesus was magnified. [18] Many also of those who had believed came, confessing, and declaring their deeds. [19] Many of those who practiced magical arts brought their books together and burned them in the sight of all. They counted their price, and found it to be fifty thousand pieces of silver. [20] So the word of the Lord was growing and becoming mighty.
God worked mightily through Paul and so, naturally, there were imitators.  But, their imitation proved less than successful.  This only attested to the genuineness of what God did through Paul and it had a profound effect.  People changed.  They repented of the things they had done and did away with their magic books and even now fifty thousand pieces of silver sounds like a lot of money.  And God was glorified!!!  On second thought, I really do like the sign, because it says that people can still change and says it publicly!!!
Email ThisBlogThis!Share to TwitterShare to FacebookShare to Pinterest


Gen 40:1 It happened after these things, that the butler of the king of Egypt and his baker offended their lord, the king of Egypt.
Gen 40:2 Pharaoh was angry with his two officers, the chief cupbearer and the chief baker.
Gen 40:3 He put them in custody in the house of the captain of the guard, into the prison, the place where Joseph was bound.
Gen 40:4 The captain of the guard assigned them to Joseph, and he took care of them. They stayed in prison many days.
Gen 40:5 They both dreamed a dream, each man his dream, in one night, each man according to the interpretation of his dream, the cupbearer and the baker of the king of Egypt, who were bound in the prison.
Gen 40:6 Joseph came in to them in the morning, and saw them, and saw that they were sad.
Gen 40:7 He asked Pharaoh's officers who were with him in custody in his master's house, saying, "Why do you look so sad today?"
Gen 40:8 They said to him, "We have dreamed a dream, and there is no one who can interpret it." Joseph said to them, "Don't interpretations belong to God? Please tell it to me."
Gen 40:9 The chief cupbearer told his dream to Joseph, and said to him, "In my dream, behold, a vine was in front of me,
Gen 40:10 and in the vine were three branches. It was as though it budded, its blossoms shot forth, and its clusters brought forth ripe grapes.
Gen 40:11 Pharaoh's cup was in my hand; and I took the grapes, and pressed them into Pharaoh's cup, and I gave the cup into Pharaoh's hand."
Gen 40:12 Joseph said to him, "This is its interpretation: the three branches are three days.
Gen 40:13 Within three more days, Pharaoh will lift up your head, and restore you to your office. You will give Pharaoh's cup into his hand, the way you did when you were his cupbearer.
Gen 40:14 But remember me when it will be well with you, and show kindness, please, to me, and make mention of me to Pharaoh, and bring me out of this house.
Gen 40:15 For indeed, I was stolen away out of the land of the Hebrews, and here also have I done nothing that they should put me into the dungeon."
Gen 40:16 When the chief baker saw that the interpretation was good, he said to Joseph, "I also was in my dream, and behold, three baskets of white bread were on my head.
Gen 40:17 In the uppermost basket there was all kinds of baked food for Pharaoh, and the birds ate them out of the basket on my head."
Gen 40:18 Joseph answered, "This is its interpretation. The three baskets are three days.
Gen 40:19 Within three more days, Pharaoh will lift up your head from off you, and will hang you on a tree; and the birds will eat your flesh from off you."
Gen 40:20 It happened the third day, which was Pharaoh's birthday, that he made a feast for all his servants, and he lifted up the head of the chief cupbearer and the head of the chief baker among his servants.
Gen 40:21 He restored the chief cupbearer to his position again, and he gave the cup into Pharaoh's hand;
Gen 40:22 but he hanged the chief baker, as Joseph had interpreted to them.
Gen 40:23 Yet the chief cupbearer didn't remember Joseph, but forgot him.

Commanded to love by Mark Copeland