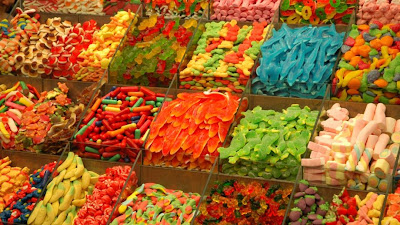 One of daughters labeled candy as "the fourth food group".  She did love here candy and I am sure this assortment would make her mouth water.  Sweets are a temptation to us all and the following is an example where taking some caused a problem.
1 Samuel 14:25-34 (WEB)
25) All the people came into the forest; and there was honey on the ground.
26) When the people had come to the forest, behold, the honey dropped: but no man put his hand to his mouth; for the people feared the oath.
27) But Jonathan didn’t hear when his father commanded the people with the oath: therefore he put forth the end of the rod who was in his hand, and dipped it in the honeycomb, and put his hand to his mouth; and his eyes were enlightened.
28) Then one of the people answered, and said, “Your father directly commanded the people with an oath, saying, ‘Cursed is the man who eats food this day.’” The people were faint.
29) Then Jonathan said, “My father has troubled the land. Please look how my eyes have been enlightened, because I tasted a little of this honey.
30) How much more, if perhaps the people had eaten freely today of the spoil of their enemies which they found? For now has there been no great slaughter among the Philistines.”
31) They struck of the Philistines that day from Michmash to Aijalon. The people were very faint;
32) and the people flew on the spoil, and took sheep, and cattle, and calves, and killed them on the ground; and the people ate them with the blood.
33) Then they told Saul, saying, “Behold, the people are sinning against Yahweh, in that they eat meat with the blood.” He said, “You have dealt treacherously. Roll a large stone to me this day!”
34) Saul said, “Disperse yourselves among the people, and tell them, ‘Bring me here every man his ox, and every man his sheep, and kill them here, and eat; and don’t sin against Yahweh in eating meat with the blood.’” All the people brought every man his ox with him that night, and killed them there.


Saul was a leader given to rash decisions.  Coupled with a lack of political insight and steadfastness of devotion to God, he didn't make a very good leader and eventually was removed.  Jonathan his son seems to have been better than his father in many ways, especially in regards to David.  In this instance he gives in to hunger (somehow it seems strange to think of honey as food) and once again shows his father's foolishness.  Saul's poor decision led to Israel's eating meat with blood and eventually led to a great slaughter (a little later on in the chapter).  Just goes to show you that CANDY IS GOOD FOOD!!!
Email ThisBlogThis!Share to TwitterShare to FacebookShare to Pinterest


2Sa 1:1 It happened after the death of Saul, when David was returned from the slaughter of the Amalekites, and David had abode two days in Ziklag;
2Sa 1:2 it happened on the third day, that behold, a man came out of the camp from Saul, with his clothes torn, and earth on his head: and so it was, when he came to David, that he fell to the earth, and did obeisance.
2Sa 1:3 David said to him, Where do you come from? He said to him, I have escaped out of the camp of Israel.
2Sa 1:4 David said to him, How did it go? Please tell me. He answered, The people have fled from the battle, and many of the people also have fallen and are dead; and Saul and Jonathan his son are dead also.
2Sa 1:5 David said to the young man who told him, How do you know that Saul and Jonathan his son are dead?
2Sa 1:6 The young man who told him said, As I happened by chance on Mount Gilboa, behold, Saul was leaning on his spear; and behold, the chariots and the horsemen followed hard after him.
2Sa 1:7 When he looked behind him, he saw me, and called to me. I answered, Here I am.
2Sa 1:8 He said to me, Who are you? I answered him, I am an Amalekite.
2Sa 1:9 He said to me, Stand, I pray you, beside me, and kill me; for anguish has taken hold of me, because my life is yet whole in me.
2Sa 1:10 So I stood beside him, and killed him, because I was sure that he could not live after that he was fallen: and I took the crown that was on his head, and the bracelet that was on his arm, and have brought them here to my lord.
2Sa 1:11 Then David took hold on his clothes, and tore them; and likewise all the men who were with him:
2Sa 1:12 and they mourned, and wept, and fasted until even, for Saul, and for Jonathan his son, and for the people of Yahweh, and for the house of Israel; because they were fallen by the sword.
2Sa 1:13 David said to the young man who told him, Where are you from? He answered, I am the son of a foreigner, an Amalekite.
2Sa 1:14 David said to him, How were you not afraid to put forth your hand to destroy Yahweh's anointed?
2Sa 1:15 David called one of the young men, and said, Go near, and fall on him. He struck him, so that he died.
2Sa 1:16 David said to him, Your blood be on your head; for your mouth has testified against you, saying, I have slain Yahweh's anointed.
2Sa 1:17 David lamented with this lamentation over Saul and over Jonathan his son
2Sa 1:18 (and he bade them teach the children of Judah the song of the bow: behold, it is written in the book of Jashar):
2Sa 1:19 Your glory, Israel, is slain on your high places! How the mighty have fallen!
2Sa 1:20 Don't tell it in Gath. Don't publish it in the streets of Ashkelon, lest the daughters of the Philistines rejoice, lest the daughters of the uncircumcised triumph.
2Sa 1:21 You mountains of Gilboa, let there be no dew nor rain on you, neither fields of offerings; For there the shield of the mighty was vilely cast away, The shield of Saul was not anointed with oil.
2Sa 1:22 From the blood of the slain, from the fat of the mighty, Jonathan's bow didn't turn back. Saul's sword didn't return empty.
2Sa 1:23 Saul and Jonathan were lovely and pleasant in their lives. In their death, they were not divided. They were swifter than eagles. They were stronger than lions.
2Sa 1:24 You daughters of Israel, weep over Saul, who clothed you in scarlet delicately, who put ornaments of gold on your clothing.
2Sa 1:25 How are the mighty fallen in the midst of the battle! Jonathan is slain on your high places.
2Sa 1:26 I am distressed for you, my brother Jonathan. You have been very pleasant to me. Your love to me was wonderful, passing the love of women.
2Sa 1:27 How are the mighty fallen, and the weapons of war perished!