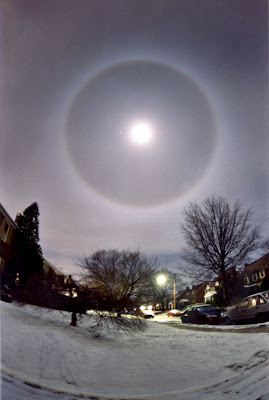 ﻿Not your normal everyday picture.  Taken with a fish-eye lens, this picture is also different because there is a ring around the moon and its winter.  I don't see too many outside pictures taken in the coldest part of the year, but this one displays a beauty that is unique.  I especially like the ring around the moon, as this is a sure sign that precipitation is on the way.  When it comes to snow, its always good to know what is coming your way.  As I was thinking about "signs", this passage came to mind.
Genesis 4:1-15 (WEB)
1) The man knew Eve his wife. She conceived, and gave birth to Cain, and said, “I have gotten a man with Yahweh’s help.”
2) Again she gave birth, to Cain’s brother Abel. Abel was a keeper of sheep, but Cain was a tiller of the ground.
3) As time passed, it happened that Cain brought an offering to Yahweh from the fruit of the ground.
4) Abel also brought some of the firstborn of his flock and of its fat. Yahweh respected Abel and his offering,
5) but he didn’t respect Cain and his offering. Cain was very angry, and the expression on his face fell.
6) Yahweh said to Cain, “Why are you angry? Why has the expression of your face fallen?
7) If you do well, will it not be lifted up? If you don’t do well, sin crouches at the door. Its desire is for you, but you are to rule over it.”
8) Cain said to Abel, his brother, “Let’s go into the field.” It happened when they were in the field, that Cain rose up against Abel, his brother, and killed him.
9) Yahweh said to Cain, “Where is Abel, your brother?” He said, “I don’t know. Am I my brother’s keeper?”
10) Yahweh said, “What have you done? The voice of your brother’s blood cries to me from the ground.
11) Now you are cursed because of the ground, which has opened its mouth to receive your brother’s blood from your hand.
12) From now on, when you till the ground, it won’t yield its strength to you. You shall be a fugitive and a wanderer in the earth.”
13) Cain said to Yahweh, “My punishment is greater than I can bear.
14) Behold, you have driven me out this day from the surface of the ground. I will be hidden from your face, and I will be a fugitive and a wanderer in the earth. It will happen that whoever finds me will kill me.”
15) Yahweh said to him, “Therefore whoever slays Cain, vengeance will be taken on him sevenfold.” Yahweh appointed a sign for Cain, lest any finding him should strike him.


The first murder and the first punishment for it.  I really don't understand why Yahweh didn't slay Cain, but perhaps the mark was almost as bad.  I mean, Cain would be reminded over and over and over and over about what he did.  Isn't that quite a punishment?  I wonder how Cain's contemporaries would know what the sign meant?  Something universal probably, like the "A" for adulteress in the novel, "The Scarlet Letter".  Isn't it a good thing we aren't branded today! In a way though, we are; because God knows our heart more clearly than any ring around the moon.
Email ThisBlogThis!Share to TwitterShare to FacebookShare to Pinterest
Newer Posts Older Posts Home
Subscribe to: Posts (Atom)