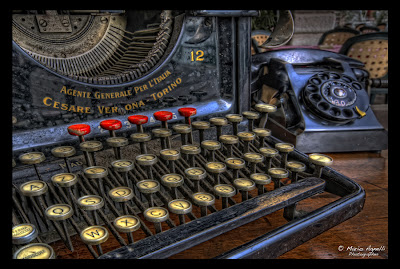 Recently, my wife has gotten into the habit of visiting the local hospice store.  She has made fugal purchases there and I have had many an opportunity to go with her when she is on one of her "shopping sprees".  The last time I was in the store I saw something I hadn't seen in years: a circular slide rule.  I actually worked with a man whose boss invented the thing.  Can you imagine?  Pictures like the above one remind me of the past and the things that happened during that former time.  Once you experience things like typing a term paper on a 1929 Underwood manual typewriter or talking on a party line, you never "really" forget them.  All it takes is something to jog your memory.  So, I thought of this passage from the book of Hebrews.
Hebrews 10:24-36 (WEB)
24) Let us consider how to provoke one another to love and good works,
25) not forsaking our own assembling together, as the custom of some is, but exhorting one another; and so much the more, as you see the Day approaching.
26) For if we sin willfully after we have received the knowledge of the truth, there remains no more a sacrifice for sins,
27) but a certain fearful expectation of judgment, and a fierceness of fire which will devour the adversaries.
28) A man who disregards Moses’ law dies without compassion on the word of two or three witnesses.
29) How much worse punishment, do you think, will he be judged worthy of, who has trodden under foot the Son of God, and has counted the blood of the covenant with which he was sanctified an unholy thing, and has insulted the Spirit of grace?
30) For we know him who said, “Vengeance belongs to me,” says the Lord, “I will repay.” Again, “The Lord will judge his people.”
31) It is a fearful thing to fall into the hands of the living God.
32) But remember the former days, in which, after you were enlightened, you endured a great struggle with sufferings;
33) partly, being exposed to both reproaches and oppressions; and partly, becoming partakers with those who were treated so.
34) For you both had compassion on me in my chains, and joyfully accepted the plundering of your possessions, knowing that you have for yourselves a better possession and an enduring one in the heavens.
35) Therefore don’t throw away your boldness, which has a great reward.
36) For you need endurance so that, having done the will of God, you may receive the promise.


Not everything in the past is great, but becoming a Christian was.  It was wonderful to come to know Christ and read the Bible for the first time.  There was opposition however, in the form of "friends" who wanted their own opinions to supersede the scriptures.  Needless to say, after a while those "friends" went down a different path.  It hurt to lose people who I thought really cared about me, but following the teachings of the Bible were far more important than having even one friend.  The Christians to whom the book of Hebrews was written needed encouragement and so this passage was necessary.  It is still valuable today; still giving us a little lift that we need to remain faithful.  Sometimes its good to remember the things of the past and apply former lessons learned to the problems we may face tomorrow.  However, I still can't think of anything good about a party line... maybe it will come to me?????
Email ThisBlogThis!Share to TwitterShare to FacebookShare to Pinterest