What is really important on my birthday? 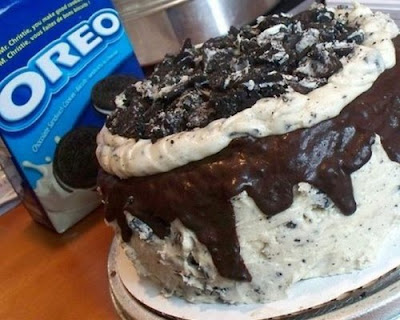 This year (on the 10th) I turn 63 years young.  More than in past years, I have been thinking a lot about it and have already bought something I wanted.  Birthday presents are wonderful; especially when they are a complete surprise.  So... who knows what will happen.  I thought of all this when I saw this OREO cake in my blog pictures and frankly my mouth watered a little when I saw this one!!!!  I do have mixed emotions about my birthday, though, as it was also my maternal grandmother Gladys's birthday as well. We were born 51 years apart about the same time of day, so its hard NOT to think of her.  I also reflect a bit on my life at this time; as to whether it has been good or bad and what I have and have not accomplished.  Foremost though, I think of the wife and children The God of Heaven has given me and their families as well.  It is not surprising therefore, for my mind to recall the Patriarch Job and how HE celebrated HIS birthday...

Job Chapter 1  1 There was a man in the land of Uz, whose name was Job. That man was blameless and upright, and one who feared God, and turned away from evil.  2 There were born to him seven sons and three daughters.  3 His possessions also were seven thousand sheep, three thousand camels, five hundred yoke of oxen, five hundred female donkeys, and a very great household; so that this man was the greatest of all the children of the east. 4 His sons went and held a feast in the house of each one on his birthday; and they sent and called for their three sisters to eat and to drink with them.  5 It was so, when the days of their feasting had run their course, that Job sent and sanctified them, and rose up early in the morning, and offered burnt offerings according to the number of them all. For Job said, “It may be that my sons have sinned, and renounced God in their hearts.” Job did so continually.

Job was very wealthy; he had many possession and a large family.  That he cared for his children is obvious but more importantly, he cared for their spiritual well-being.  Today, pardon me, but I am going to be a bit selfish and hope that I get a cake like the one in the picture, but if I don't, no problem.  What I really want, more than anything else, is for those who are my "family" to love God with all of their heart and follow his wishes in every way!!!  Oh, how full my life would be if this were a reality!!!! On second thought, who needs a cake; I can only imagine how many weight watcher points are in that little baby in the picture!!!!!

Luk 21:1 He looked up, and saw the rich people who were putting their gifts into the treasury.
Luk 21:2 He saw a certain poor widow casting in two small brass coins.
Luk 21:3 He said, "Truly I tell you, this poor widow put in more than all of them,
Luk 21:4 for all these put in gifts for God from their abundance, but she, out of her poverty, put in all that she had to live on."
Luk 21:5 As some were talking about the temple and how it was decorated with beautiful stones and gifts, he said,
Luk 21:6 "As for these things which you see, the days will come, in which there will not be left here one stone on another that will not be thrown down."
Luk 21:7 They asked him, "Teacher, so when will these things be? What is the sign that these things are about to happen?"
Luk 21:8 He said, "Watch out that you don't get led astray, for many will come in my name, saying, 'I am he,' and, 'The time is at hand.' Therefore don't follow them.
Luk 21:9 When you hear of wars and disturbances, don't be terrified, for these things must happen first, but the end won't come immediately."
Luk 21:10 Then he said to them, "Nation will rise against nation, and kingdom against kingdom.
Luk 21:11 There will be great earthquakes, famines, and plagues in various places. There will be terrors and great signs from heaven.
Luk 21:12 But before all these things, they will lay their hands on you and will persecute you, delivering you up to synagogues and prisons, bringing you before kings and governors for my name's sake.
Luk 21:13 It will turn out as a testimony for you.
Luk 21:14 Settle it therefore in your hearts not to meditate beforehand how to answer,
Luk 21:15 for I will give you a mouth and wisdom which all your adversaries will not be able to withstand or to contradict.
Luk 21:16 You will be handed over even by parents, brothers, relatives, and friends. They will cause some of you to be put to death.
Luk 21:17 You will be hated by all men for my name's sake.
Luk 21:18 And not a hair of your head will perish.
Luk 21:19 "By your endurance you will win your lives.
Luk 21:20 "But when you see Jerusalem surrounded by armies, then know that its desolation is at hand.
Luk 21:21 Then let those who are in Judea flee to the mountains. Let those who are in the midst of her depart. Let those who are in the country not enter therein.
Luk 21:22 For these are days of vengeance, that all things which are written may be fulfilled.
Luk 21:23 Woe to those who are pregnant and to those who nurse infants in those days! For there will be great distress in the land, and wrath to this people.
Luk 21:24 They will fall by the edge of the sword, and will be led captive into all the nations. Jerusalem will be trampled down by the Gentiles, until the times of the Gentiles are fulfilled.
Luk 21:25 There will be signs in the sun, moon, and stars; and on the earth anxiety of nations, in perplexity for the roaring of the sea and the waves;
Luk 21:26 men fainting for fear, and for expectation of the things which are coming on the world: for the powers of the heavens will be shaken.
Luk 21:27 Then they will see the Son of Man coming in a cloud with power and great glory.
Luk 21:28 But when these things begin to happen, look up, and lift up your heads, because your redemption is near."
Luk 21:29 He told them a parable. "See the fig tree, and all the trees.
Luk 21:30 When they are already budding, you see it and know by your own selves that the summer is already near.
Luk 21:31 Even so you also, when you see these things happening, know that the Kingdom of God is near.
Luk 21:32 Most certainly I tell you, this generation will not pass away until all things are accomplished.
Luk 21:33 Heaven and earth will pass away, but my words will by no means pass away.
Luk 21:34 "So be careful, or your hearts will be loaded down with carousing, drunkenness, and cares of this life, and that day will come on you suddenly.
Luk 21:35 For it will come like a snare on all those who dwell on the surface of all the earth.
Luk 21:36 Therefore be watchful all the time, praying that you may be counted worthy to escape all these things that will happen, and to stand before the Son of Man."
Luk 21:37 Every day Jesus was teaching in the temple, and every night he would go out and spend the night on the mountain that is called Olivet.
Luk 21:38 All the people came early in the morning to him in the temple to hear him.

"THE GOSPEL OF MATTHEW" Chapter Twenty by Mark Copeland