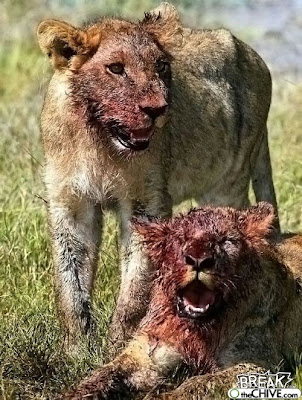 Here's something you don't see everyday; the aftermath of a big meal. In order to look like this, it must have been a rather large beast, big enough for the two of them. But its not the appearance that bothers me so much as the fact that another animal died. I know, that is the way life is, but somehow it still bothers me. When I was 17 I thought I would live forever, but now at 60 I know better. Things happen. Death comes to us all, hopefully not a violent one, but hey, you never know. What is not inevitable is spiritual death; THAT CAN BE AVOIDED. Read the following passage from 1st Peter and take a few minutes to think about it.


1 Peter 5:6-10
6 Humble yourselves therefore under the mighty hand of God, that he may exalt you in due time;
7 casting all your worries on him, because he cares for you.
8 Be sober and self-controlled. Be watchful. Your adversary the devil, walks around like a roaring lion, seeking whom he may devour.
9 Withstand him steadfast in your faith, knowing that your brothers who are in the world are undergoing the same sufferings.
10 But may the God of all grace, who called you to his eternal glory by Christ Jesus, after you have suffered a little while, perfect, establish, strengthen, and settle you. WEB

You don't have to be "lunch" for the Devil; he can be overcome through faith. Faith in and through God who has power over the adversary. Don't take Satan lightly, don't fall for the misconception that he isn't real, don't be tricked; you are a target. Do save your spiritual future by the power of God by the faith the Almighty has given you. In humility, trust in God and look to him for the way out... its there, Jesus will never leave you or forsake you. Listen, learn and do those things God wants you to do before its too late and you become next on Satan's luncheon list.
Email ThisBlogThis!Share to TwitterShare to FacebookShare to Pinterest
Newer Posts Older Posts Home
Subscribe to: Posts (Atom)