There is a rainbow in your way... 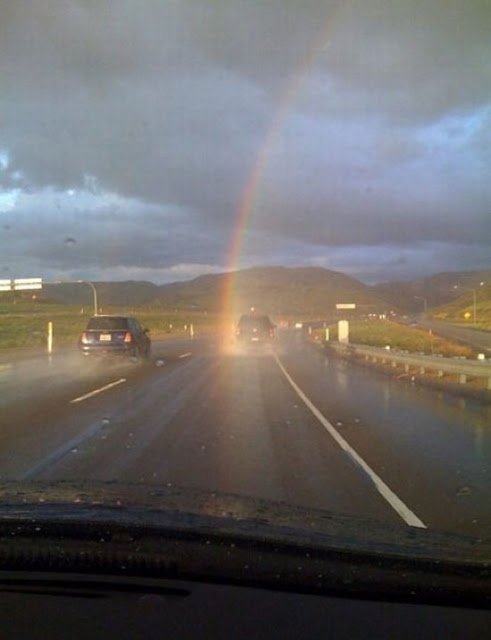 You are driving along and suddenly, right in front of you is a rainbow.  Imagine that!!! So far, I have never seen it in person, but who knows, maybe today?  To me, rainbows are promises of goodness yet to be seen.  My wife has been watching a lot of "DR. Quinn, Medicine Woman" lately and it just so happens that yesterday we watched an episode entitled "promises, promises", which focused on the cost of our commitments.  Coincidence, probably, but it did have an impact on me when I saw this picture.  Because promises have a cost and oftentimes it is VERY costly.  Which led me to this passage from the book of Hebrews...
Hebrews 9:11-20 (WEB)
11) But Christ having come as a high priest of the coming good things, through the greater and more perfect tabernacle, not made with hands, that is to say, not of this creation,
12) nor yet through the blood of goats and calves, but through his own blood, entered in once for all into the Holy Place, having obtained eternal redemption.
13) For if the blood of goats and bulls, and the ashes of a heifer sprinkling those who have been defiled, sanctify to the cleanness of the flesh:
14) how much more will the blood of Christ, who through the eternal Spirit offered himself without blemish to God, cleanse your conscience from dead works to serve the living God?
15) For this reason he is the mediator of a new covenant, since a death has occurred for the redemption of the transgressions that were under the first covenant, that those who have been called may receive the promise of the eternal inheritance.
16) For where a last will and testament is, there must of necessity be the death of him who made it.
17) For a will is in force where there has been death, for it is never in force while he who made it lives.
18) Therefore even the first covenant has not been dedicated without blood.
19) For when every commandment had been spoken by Moses to all the people according to the law, he took the blood of the calves and the goats, with water and scarlet wool and hyssop, and sprinkled both the book itself and all the people,
20) saying, “This is the blood of the covenant which God has commanded you.”


We have the promise of Eternal Life, but the cost was death and a horrible one at that.  Yet, out of the pain, anguish and suffering something wonderful has happened; there is hope for all who will embrace God's will for us through Jesus.  Its more than just a pie-in-the-sky, ideal (or maybe even a rainbow in the sky) because Jesus actually lived and actually died and actually lives again forever.  Since this is verifiable truth we have hope for live after life and that is more beautiful than any rainbow up ahead.  And we don't even have to go through rain to get to it; imagine that!!!
Email ThisBlogThis!Share to TwitterShare to FacebookShare to Pinterest