Am I Bob, or is this central Florida? 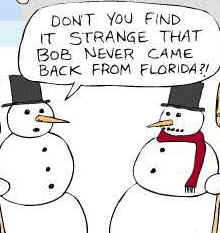 Sometimes we say or do things that are foolish.  Even worse, we may not even REALIZE our foolishness.  If we are involved in something like excessive alcohol consumption and become truly ADDICTED, we may not be willing or able to recognize that our actions are destructive and want EVERYONE to do what we do.  And so we come to an interesting passage from the book of
1 Peter...

1 Peter, Chapter 4
1 Forasmuch then as Christ suffered for us in the flesh, arm yourselves also with the same mind; for he who has suffered in the flesh has ceased from sin;  2 that you no longer should live the rest of your time in the flesh for the lusts of men, but for the will of God. 3 For we have spent enough of our past time doing the desire of the Gentiles, and having walked in lewdness, lusts, drunken binges, orgies, carousings, and abominable idolatries.  4 They think it is strange that you don’t run with them into the same excess of riot, blaspheming: 5 who will give account to him who is ready to judge the living and the dead.

For a snowman, Florida is a one-way ticket.  Sin is as well; for it will eventually lead to complete destruction of your life, both in this world and the next.  Take a moment to objectively reflect on how you live and if you don't like what you see... change!  As long as there is life... there is hope!!!  Even if you have a carrot for a nose!!!
Email ThisBlogThis!Share to TwitterShare to FacebookShare to Pinterest

"THE EPISTLE TO THE EPHESIANS" Chapter Three by Mark Copeland