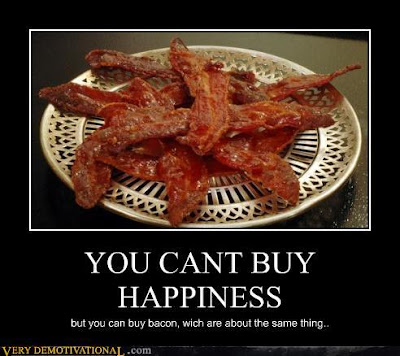 Yesterday I made Lima bean soup, but with bacon.  Today, I am paying for having that extra portion of beans, but it was worth it, because I really like it better with bacon than with ham.  So, when I saw this picture, I related to it in a big way!!!  But, I do know that this picture describes a fleeting truth and not absolute one.  Here is how I know...
WEB: Matthew Chapter 6

[19] “Don’t lay up treasures for yourselves on the earth, where moth and rust consume, and where thieves break through and steal; [20] but lay up for yourselves treasures in heaven, where neither moth nor rust consume, and where thieves don’t break through and steal; [21] for where your treasure is, there your heart will be also.

[24] “No one can serve two masters, for either he will hate the one and love the other; or else he will be devoted to one and despise the other. You can’t serve both God and Mammon. [25] Therefore, I tell you, don’t be anxious for your life: what you will eat, or what you will drink; nor yet for your body, what you will wear. Isn’t life more than food, and the body more than clothing? [26] See the birds of the sky, that they don’t sow, neither do they reap, nor gather into barns. Your heavenly Father feeds them. Aren’t you of much more value than they?

[27] “Which of you, by being anxious, can add one moment to his lifespan? [28] Why are you anxious about clothing? Consider the lilies of the field, how they grow. They don’t toil, neither do they spin, [29] yet I tell you that even Solomon in all his glory was not dressed like one of these. [30] But if God so clothes the grass of the field, which today exists, and tomorrow is thrown into the oven, won’t he much more clothe you, you of little faith?

[31] “Therefore don’t be anxious, saying, ‘What will we eat?’, ‘What will we drink?’ or, ‘With what will we be clothed?’ [32] For the Gentiles seek after all these things; for your heavenly Father knows that you need all these things. [33] But seek first God’s Kingdom, and his righteousness; and all these things will be given to you as well. [34] Therefore don’t be anxious for tomorrow, for tomorrow will be anxious for itself. Each day’s own evil is sufficient."
Food, shelter, family; essentials all.  We know this and yet do we know that there is something more?  If we have eyes, ears and the native intelligence of a smart bird, then we can appreciate love, kindness and gentleness.  Characteristics of humanity, which of course find their perfection in Divinity.  I say: Enjoy all the good things that God has given you and be happy.  Only remember that GOD has given them to you and thank HIM.  And, oh, yes, don't overdo it on bean soup!!!
Email ThisBlogThis!Share to TwitterShare to FacebookShare to Pinterest


Mat 16:1 The Pharisees and Sadducees came, and testing him, asked him to show them a sign from heaven.
Mat 16:2 But he answered them, "When it is evening, you say, 'It will be fair weather, for the sky is red.'
Mat 16:3 In the morning, 'It will be foul weather today, for the sky is red and threatening.' Hypocrites! You know how to discern the appearance of the sky, but you can't discern the signs of the times!
Mat 16:4 An evil and adulterous generation seeks after a sign, and there will be no sign given to it, except the sign of the prophet Jonah." He left them, and departed.
Mat 16:5 The disciples came to the other side and had forgotten to take bread.
Mat 16:6 Jesus said to them, "Take heed and beware of the yeast of the Pharisees and Sadducees."
Mat 16:7 They reasoned among themselves, saying, "We brought no bread."
Mat 16:8 Jesus, perceiving it, said, "Why do you reason among yourselves, you of little faith, 'because you have brought no bread?'
Mat 16:9 Don't you yet perceive, neither remember the five loaves for the five thousand, and how many baskets you took up?
Mat 16:10 Nor the seven loaves for the four thousand, and how many baskets you took up?
Mat 16:11 How is it that you don't perceive that I didn't speak to you concerning bread? But beware of the yeast of the Pharisees and Sadducees."
Mat 16:12 Then they understood that he didn't tell them to beware of the yeast of bread, but of the teaching of the Pharisees and Sadducees.
Mat 16:13 Now when Jesus came into the parts of Caesarea Philippi, he asked his disciples, saying, "Who do men say that I, the Son of Man, am?"
Mat 16:14 They said, "Some say John the Baptizer, some, Elijah, and others, Jeremiah, or one of the prophets."
Mat 16:15 He said to them, "But who do you say that I am?"
Mat 16:16 Simon Peter answered, "You are the Christ, the Son of the living God."
Mat 16:17 Jesus answered him, "Blessed are you, Simon Bar Jonah, for flesh and blood has not revealed this to you, but my Father who is in heaven.
Mat 16:18 I also tell you that you are Peter, and on this rock I will build my assembly, and the gates of Hades will not prevail against it.
Mat 16:19 I will give to you the keys of the Kingdom of Heaven, and whatever you bind on earth will have been bound in heaven; and whatever you release on earth will have been released in heaven."
Mat 16:20 Then he commanded the disciples that they should tell no one that he is Jesus the Christ.
Mat 16:21 From that time, Jesus began to show his disciples that he must go to Jerusalem and suffer many things from the elders, chief priests, and scribes, and be killed, and the third day be raised up.
Mat 16:22 Peter took him aside, and began to rebuke him, saying, "Far be it from you, Lord! This will never be done to you."
Mat 16:23 But he turned, and said to Peter, "Get behind me, Satan! You are a stumbling block to me, for you are not setting your mind on the things of God, but on the things of men."
Mat 16:24 Then Jesus said to his disciples, "If anyone desires to come after me, let him deny himself, and take up his cross, and follow me.
Mat 16:25 For whoever desires to save his life will lose it, and whoever will lose his life for my sake will find it.
Mat 16:26 For what will it profit a man, if he gains the whole world, and forfeits his life? Or what will a man give in exchange for his life?
Mat 16:27 For the Son of Man will come in the glory of his Father with his angels, and then he will render to everyone according to his deeds.
Mat 16:28 Most certainly I tell you, there are some standing here who will in no way taste of death, until they see the Son of Man coming in his Kingdom."

Blest be the tie by Mark Copeland