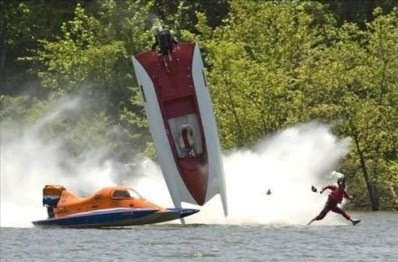 When I saw this picture today, I thought of a manager I know who frankly is one great boss; but sadly I am forced to admit that not even HE IS PERFECT. Often, when we talk of some one's perfection we say that they could "walk on water". But, so far as I know there has only been one man who filled the bill (and, yes this picture is probably photo-shopped). Consider these two passages from the book of Matthew.
Matt 8:23-27
23 When he got into a boat, his disciples followed him.
24 Behold, a great tempest arose in the sea, so much that the boat was covered with the waves, but he was asleep.
25 They came to him, and woke him up, saying, "Save us, Lord! We are dying!"
26 He said to them, "Why are you fearful, oh you of little faith?" Then he got up, rebuked the wind and the sea, and there was a great calm.
27 The men marveled, saying, "What kind of man is this, that even the wind and the sea obey him?"WEB
and
Matt 14:22-33
22 Immediately Jesus made the disciples get into the boat, and to go ahead of him to the other side, while he sent the multitudes away.23 After he had sent the multitudes away, he went up into the mountain by himself to pray. When evening had come, he was there alone.24 But the boat was now in the middle of the sea, distressed by the waves, for the wind was contrary.25 In the fourth watch of the night, Jesus came to them, walking on the sea.26 When the disciples saw him walking on the sea, they were troubled, saying, "It's a ghost!" and they cried out for fear.27 But immediately Jesus spoke to them, saying "Cheer up! I AM! Don't be afraid."28 Peter answered him and said, "Lord, if it is you, command me to come to you on the waters."29 He said, "Come!" Peter stepped down from the boat, and walked on the waters to come to Jesus.30 But when he saw that the wind was strong, he was afraid, and beginning to sink, he cried out, saying, "Lord, save me!"31 Immediately Jesus stretched out his hand, took hold of him, and said to him, "You of little faith, why did you doubt?"32 When they got up into the boat, the wind ceased.33 Those who were in the boat came and worshiped him, saying, "You are truly the Son of God!"WEB
Jesus had this power over the elements that makes even a skeptic wonder. Imagine having the power to control nature and do the impossible. How would YOU use it? Some might show off to impress people, but Jesus uses his to help people. No pride here, just love and concern. Reason enough for most of us to want to investigate more about him. The thing is: The more you know about him, the more there is to know and with each bit of information comes another testimony about the only perfect man who ever lived. And the only one who was perfect enough to "walk on water".
Email ThisBlogThis!Share to TwitterShare to FacebookShare to Pinterest
Newer Posts Older Posts Home
Subscribe to: Posts (Atom)