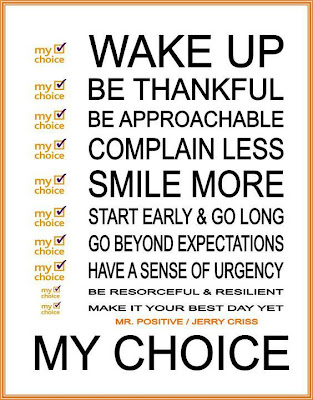 I think I would like to meet Jerry Criss!!!  Who wouldn't want to know someone who entitles himself "MR. POSITIVE"?  There is so much negative in the world that it would be nice to be exposed to someone who is not!!!  This sign is a clue to who Jerry Criss is.  He is positive because of his thinking and his thoughts are programmed.  For those who love God, here is a program...


WEB: Proverbs 3:5. Trust in Yahweh with all your heart,
and don’t lean on your own understanding.

WEB: Psalms Chapter 119
[9] How can a young man keep his way pure?
By living according to your word.

[10] With my whole heart, I have sought you.
Don’t let me wander from your commandments.

[11] I have hidden your word in my heart,
that I might not sin against you.
WEB: Proverbs 16:9. A man’s heart plans his course,
but Yahweh directs his steps.
Trust, it is the essential of faith.  What you trust in IS YOUR FAITH!!!  Who better to trust than the God of the Bible?  Your own ideas may seem good to you and some of them may be good, but not all!!!  Why not trust in the perfect good... God.  Today, there is a lot of talk about "family values"; this is just code for humanistic reasoning and without God at its core... it will falter and ultimately fail!!!  We need to have God's word hidden in our hearts to keep us from sin; our own thoughts just won't cut it!!!   Yahweh is the ONLY true source of real wisdom; listen to his words and live.  Program your thoughts by remembering HIS WORD and as Proverbs 16:9 says "Yahweh directs his steps".  Is the sign therefore a bad thing; the answer is NO, but, instead, try putting together a collection of Bible verses and making a sign out of it.... it may not be as attractive as the above picture, but ultimately it will be better for you!!!!!
Email ThisBlogThis!Share to TwitterShare to FacebookShare to Pinterest


Exo 13:1 Yahweh spoke to Moses, saying,
Exo 13:2 "Sanctify to me all of the firstborn, whatever opens the womb among the children of Israel, both of man and of animal. It is mine."
Exo 13:3 Moses said to the people, "Remember this day, in which you came out from Egypt, out of the house of bondage; for by strength of hand Yahweh brought you out from this place. No leavened bread shall be eaten.
Exo 13:4 This day you go forth in the month Abib.
Exo 13:5 It shall be, when Yahweh shall bring you into the land of the Canaanite, and the Hittite, and the Amorite, and the Hivite, and the Jebusite, which he swore to your fathers to give you, a land flowing with milk and honey, that you shall keep this service in this month.
Exo 13:6 Seven days you shall eat unleavened bread, and in the seventh day shall be a feast to Yahweh.
Exo 13:7 Unleavened bread shall be eaten throughout the seven days; and no leavened bread shall be seen with you, neither shall there be yeast seen with you, in all your borders.
Exo 13:8 You shall tell your son in that day, saying, 'It is because of that which Yahweh did for me when I came forth out of Egypt.'
Exo 13:9 It shall be for a sign to you on your hand, and for a memorial between your eyes, that the law of Yahweh may be in your mouth; for with a strong hand Yahweh has brought you out of Egypt.
Exo 13:10 You shall therefore keep this ordinance in its season from year to year.
Exo 13:11 "It shall be, when Yahweh shall bring you into the land of the Canaanite, as he swore to you and to your fathers, and shall give it you,
Exo 13:12 that you shall set apart to Yahweh all that opens the womb, and every firstborn which you have that comes from an animal. The males shall be Yahweh's.
Exo 13:13 Every firstborn of a donkey you shall redeem with a lamb; and if you will not redeem it, then you shall break its neck; and you shall redeem all the firstborn of man among your sons.
Exo 13:14 It shall be, when your son asks you in time to come, saying, 'What is this?' that you shall tell him, 'By strength of hand Yahweh brought us out from Egypt, from the house of bondage;
Exo 13:15 and it happened, when Pharaoh would hardly let us go, that Yahweh killed all the firstborn in the land of Egypt, both the firstborn of man, and the firstborn of animal. Therefore I sacrifice to Yahweh all that opens the womb, being males; but all the firstborn of my sons I redeem.'
Exo 13:16 It shall be for a sign on your hand, and for symbols between your eyes: for by strength of hand Yahweh brought us forth out of Egypt."
Exo 13:17 It happened, when Pharaoh had let the people go, that God didn't lead them by the way of the land of the Philistines, although that was near; for God said, "Lest perhaps the people change their minds when they see war, and they return to Egypt;"
Exo 13:18 but God led the people around by the way of the wilderness by the Red Sea; and the children of Israel went up armed out of the land of Egypt.
Exo 13:19 Moses took the bones of Joseph with him, for he had made the children of Israel swear, saying, "God will surely visit you, and you shall carry up my bones away from here with you."
Exo 13:20 They took their journey from Succoth, and encamped in Etham, in the edge of the wilderness.
Exo 13:21 Yahweh went before them by day in a pillar of cloud, to lead them on their way, and by night in a pillar of fire, to give them light, that they might go by day and by night:
Exo 13:22 the pillar of cloud by day, and the pillar of fire by night, didn't depart from before the people.

Mar. 3, 4
Mark 4
Mar 4:1 Again he began to teach by the seaside. A great multitude was gathered to him, so that he entered into a boat in the sea, and sat down. All the multitude were on the land by the sea.
Mar 4:2 He taught them many things in parables, and told them in his teaching,
Mar 4:3 "Listen! Behold, the farmer went out to sow,
Mar 4:4 and it happened, as he sowed, some seed fell by the road, and the birds came and devoured it.
Mar 4:5 Others fell on the rocky ground, where it had little soil, and immediately it sprang up, because it had no depth of soil.
Mar 4:6 When the sun had risen, it was scorched; and because it had no root, it withered away.
Mar 4:7 Others fell among the thorns, and the thorns grew up, and choked it, and it yielded no fruit.
Mar 4:8 Others fell into the good ground, and yielded fruit, growing up and increasing. Some brought forth thirty times, some sixty times, and some one hundred times as much."
Mar 4:9 He said, "Whoever has ears to hear, let him hear."
Mar 4:10 When he was alone, those who were around him with the twelve asked him about the parables.
Mar 4:11 He said to them, "To you is given the mystery of the Kingdom of God, but to those who are outside, all things are done in parables,
Mar 4:12 that 'seeing they may see, and not perceive; and hearing they may hear, and not understand; lest perhaps they should turn again, and their sins should be forgiven them.' "
Mar 4:13 He said to them, "Don't you understand this parable? How will you understand all of the parables?
Mar 4:14 The farmer sows the word.
Mar 4:15 The ones by the road are the ones where the word is sown; and when they have heard, immediately Satan comes, and takes away the word which has been sown in them.
Mar 4:16 These in like manner are those who are sown on the rocky places, who, when they have heard the word, immediately receive it with joy.
Mar 4:17 They have no root in themselves, but are short-lived. When oppression or persecution arises because of the word, immediately they stumble.
Mar 4:18 Others are those who are sown among the thorns. These are those who have heard the word,
Mar 4:19 and the cares of this age, and the deceitfulness of riches, and the lusts of other things entering in choke the word, and it becomes unfruitful.
Mar 4:20 Those which were sown on the good ground are those who hear the word, and accept it, and bear fruit, some thirty times, some sixty times, and some one hundred times."
Mar 4:21 He said to them, "Is the lamp brought to be put under a basket or under a bed? Isn't it put on a stand?
Mar 4:22 For there is nothing hidden, except that it should be made known; neither was anything made secret, but that it should come to light.
Mar 4:23 If any man has ears to hear, let him hear."
Mar 4:24 He said to them, "Take heed what you hear. With whatever measure you measure, it will be measured to you, and more will be given to you who hear.
Mar 4:25 For whoever has, to him will more be given, and he who doesn't have, even that which he has will be taken away from him."
Mar 4:26 He said, "The Kingdom of God is as if a man should cast seed on the earth,
Mar 4:27 and should sleep and rise night and day, and the seed should spring up and grow, he doesn't know how.
Mar 4:28 For the earth bears fruit: first the blade, then the ear, then the full grain in the ear.
Mar 4:29 But when the fruit is ripe, immediately he puts forth the sickle, because the harvest has come."
Mar 4:30 He said, "How will we liken the Kingdom of God? Or with what parable will we illustrate it?
Mar 4:31 It's like a grain of mustard seed, which, when it is sown in the earth, though it is less than all the seeds that are on the earth,
Mar 4:32 yet when it is sown, grows up, and becomes greater than all the herbs, and puts out great branches, so that the birds of the sky can lodge under its shadow."
Mar 4:33 With many such parables he spoke the word to them, as they were able to hear it.
Mar 4:34 Without a parable he didn't speak to them; but privately to his own disciples he explained everything.
Mar 4:35 On that day, when evening had come, he said to them, "Let's go over to the other side."
Mar 4:36 Leaving the multitude, they took him with them, even as he was, in the boat. Other small boats were also with him.
Mar 4:37 A big wind storm arose, and the waves beat into the boat, so much that the boat was already filled.
Mar 4:38 He himself was in the stern, asleep on the cushion, and they woke him up, and told him, "Teacher, don't you care that we are dying?"
Mar 4:39 He awoke, and rebuked the wind, and said to the sea, "Peace! Be still!" The wind ceased, and there was a great calm.
Mar 4:40 He said to them, "Why are you so afraid? How is it that you have no faith?"
Mar 4:41 They were greatly afraid, and said to one another, "Who then is this, that even the wind and the sea obey him?"
Email ThisBlogThis!Share to TwitterShare to FacebookShare to Pinterest