In the right light 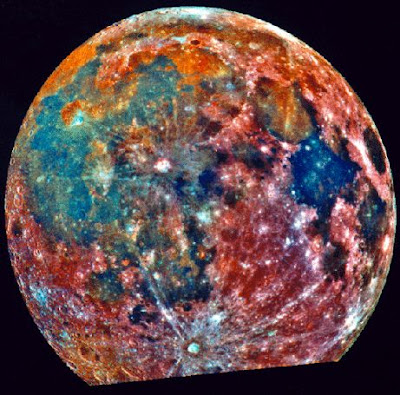 You probably already know what this is, but I will tell you anyway; The moon. Seen in infrared, it changes from the silvery grey we have come to expect, to this magnificent montage of color. If this is your first time seeing the moon this way, you may have been a bit surprised. Life is like that; we think we know things and then suddenly something happens and we them in an entirely new light. Then everything changes. In thinking about this, an episode from the new testament came to mind. Read on, its a short passage and well worth the time.
Mat 8:23-27
(23) Jesus' disciples went with him as he left in a boat.
(24) Suddenly, a severe storm came across the sea. The waves were covering the boat. Yet, Jesus was sleeping.
(25) So they woke him up, saying, "Lord! Save us! We're going to die!"
(26) Jesus said to them, "Why do you cowards have so little faith?" Then he got up, gave an order to the wind and the sea, and the sea became very calm.
(27) The men were amazed and asked, "What kind of man is this? Even the wind and the sea obey him!"
Jesus had just presented the sermon on the mount (chapter 7) and after that healed a few people, then this happens. Its amazing how focused your thoughts become if you think you are going to die. Suddenly, they saw Jesus in a new light; in a way that would begin to change their whole lives. Everything would be different, because here was a man who could control nature... and so, the question: "What kind of man is this?" Good question, but its not just for them, its for us as well. And perhaps it is the most important you will ever ask. Just be sure you are looking at him in the right light, with eyes of faith.
Email ThisBlogThis!Share to TwitterShare to FacebookShare to Pinterest 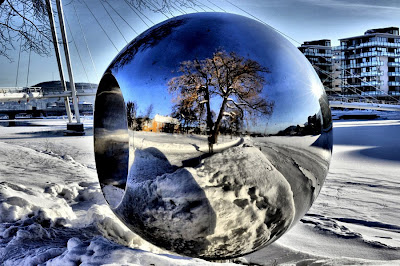 The world is full of curiosities and this is one of them. I have never seen anything like this before, except in the terminator movies. It seems to me it must be a round glass or steel mirror, but its real purpose is a mystery. What it does do, however, is to magnify its surroundings so that they seem more intense than they really are. Curiosities are like that; they really focus your attention, but sometimes they cause you to come to a wrong conclusion. Here is one example.

Acts 14:8-20 WEB (R)
(8) At Lystra a certain man sat, impotent in his feet, a cripple from his mother's womb, who never had walked.
(9) He was listening to Paul speaking, who, fastening eyes on him, and seeing that he had faith to be made whole,
(10) said with a loud voice, "Stand upright on your feet!" He leaped up and walked.
(11) When the multitude saw what Paul had done, they lifted up their voice, saying in the language of Lycaonia, "The gods have come down to us in the likeness of men!"
(12) They called Barnabas "Jupiter," and Paul "Mercury," because he was the chief speaker.
(13) The priest of Jupiter, whose temple was in front of their city, brought oxen and garlands to the gates, and would have made a sacrifice along with the multitudes.
(14) But when the apostles, Barnabas and Paul, heard of it, they tore their clothes, and sprang into the multitude, crying out,
(15) "Men, why are you doing these things? We also are men of like passions with you, and bring you good news, that you should turn from these vain things to the living God, who made the sky and the earth and the sea, and all that is in them;
(16) who in the generations gone by allowed all the nations to walk in their own ways.
(17) Yet he didn't leave himself without witness, in that he did good and gave you rains from the sky and fruitful seasons, filling our hearts with food and gladness."
(18) Even saying these things, they hardly stopped the multitudes from making a sacrifice to them.
(19) But some Jews from Antioch and Iconium came there, and having persuaded the multitudes, they stoned Paul, and dragged him out of the city, supposing that he was dead.
(20) But as the disciples stood around him, he rose up, and entered into the city. On the next day he went out with Barnabas to Derbe.

The miracle of healing at Lystra caused the natives to come to the wrong conclusion about Barnabus and Paul. It took a bit of persuading, but eventually the multitude came to their senses and realized he was not a god. The Gospel was preached, but opposition arose and almost killed Paul. In one of the most courageous actions in Scripture, Paul goes back into the city that stoned him. I know he was not one of the "gods", but he sure was a larger than life hero. I wonder how he would look in the bubble mirror above? Humm, I wonder how I would look? No, I better not go there, mirrors tend to put ON WEIGHT!
Email ThisBlogThis!Share to TwitterShare to FacebookShare to Pinterest
Newer Posts Older Posts Home
Subscribe to: Posts (Atom)