Warning! View at your own risk!!!

Unlike other posts, I am not putting the picture first.  The reason is that it is very graphic in nature and I wouldn't want to disturb anyone without warning.  So, do not proceed any further if you are the sort of person who is easily disturbed.  Why would I put something that is potentially upsetting on the blog in the first place? The answer is pain is a reality in this life and my hopes are that those who ultimately do page down and view the picture will be forced to think about the following topic...
Mark 9:35-48 (WEB)
35) He sat down, and called the twelve; and he said to them, “If any man wants to be first, he shall be last of all, and servant of all.”
36) He took a little child, and set him in their midst. Taking him in his arms, he said to them,
37) “Whoever receives one such little child in my name, receives me, and whoever receives me, doesn’t receive me, but him who sent me.”
38) John said to him, “Teacher, we saw someone who doesn’t follow us casting out demons in your name; and we forbade him, because he doesn’t follow us.”
39) But Jesus said, “Don’t forbid him, for there is no one who will do a mighty work in my name, and be able quickly to speak evil of me.
40) For whoever is not against us is on our side.
41) For whoever will give you a cup of water to drink in my name, because you are Christ’s, most certainly I tell you, he will in no way lose his reward.
42) Whoever will cause one of these little ones who believe in me to stumble, it would be better for him if he were thrown into the sea with a millstone hung around his neck.
43) If your hand causes you to stumble, cut it off. It is better for you to enter into life maimed, rather than having your two hands to go into Gehenna, into the unquenchable fire,
44) ‘where their worm doesn’t die, and the fire is not quenched.’
45) If your foot causes you to stumble, cut it off. It is better for you to enter into life lame, rather than having your two feet to be cast into Gehenna, into the fire that will never be quenched—
46) ‘where their worm doesn’t die, and the fire is not quenched.’
47) If your eye causes you to stumble, cast it out. It is better for you to enter into the Kingdom of God with one eye, rather than having two eyes to be cast into the Gehenna of fire,
48) ‘where their worm doesn’t die, and the fire is not quenched.’
During the past few months, I have become reacquainted with pain; pain that for awhile did not stop, that did not abate, that allowed neither rest or peace of mind.  Suffering, constant suffering, which seemed like it would never end.  Thankfully, I am getting better, although I just wish it could be faster because I hate pain.  But, what if never stopped?  What if it never stopped?  Hell must be like that; Gehenna hell!  The shear impact of something like burning, something so painful  that  the mere thought of it, or a brief  glimpse of the suffering  involved would make the body physically react and the mind reel.  The only thing left to say is... do whatever you have to do to avoid hell.
And then there is this picture..... 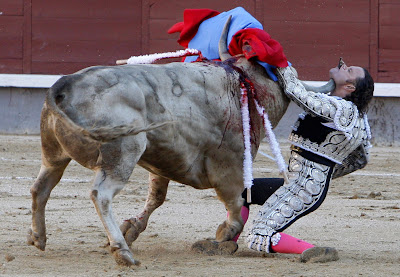