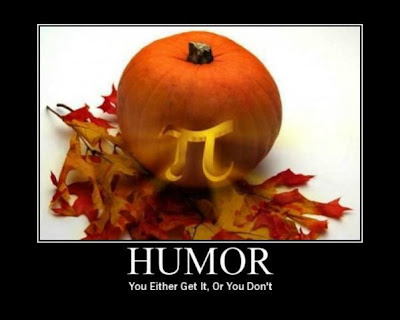 I admit this is not a belly laugh; but, in its own way its funny.  Pumpkin pie, its a new one to me!  Humor is something we humans do, its just one way we have a good time.  And although this example is a little "out there", still in a "big bang theory" sort of way it IS FUNNY.  Which prompted the question: I wonder if Jesus ever told a joke?  Honestly, I don't know the answer to that one, but I do know he liked children and did enjoy a good party.  The following is what I am talking about...
WEB: John Chapter 2
[1] The third day, there was a marriage in Cana of Galilee. Jesus’ mother was there. [2] Jesus also was invited, with his disciples, to the marriage. [3] When the wine ran out, Jesus’ mother said to him, “They have no wine.”

[5] His mother said to the servants, “Whatever he says to you, do it.” [6] Now there were six water pots of stone set there after the Jews’ way of purifying, containing two or three metretes apiece. [7] Jesus said to them, "“Fill the water pots with water.”" They filled them up to the brim. [8] He said to them, "“Now draw some out, and take it to the ruler of the feast.”" So they took it. [9] When the ruler of the feast tasted the water now become wine, and didn’t know where it came from (but the servants who had drawn the water knew), the ruler of the feast called the bridegroom, [10] and said to him, “Everyone serves the good wine first, and when the guests have drunk freely, then that which is worse. You have kept the good wine until now!” [11] This beginning of his signs Jesus did in Cana of Galilee, and revealed his glory; and his disciples believed in him.
I was a little curious about what Jesus actually did, so I looked up the embolden word for wine and Vine's dictionary gave me this definition:
"Strongs 3631: oinos  is the general word for "wine." The mention of the bursting of the wineskins, Matt. 9:17; Mark 2:22; Luke 5:37, implies fermentation."
So, in other places in the scriptures the word wine may not indicate alcoholic wine, but it seems to here.  Which shows Jesus' attitude towards weddings and of course his power over the physical world.  Remember, Jesus was a Jew and not a Gentile, so it is possible that their attitude towards drinking could have been different.  See also, Rom 14:21.  But, back to the question of humor... Did Jesus have a sense of humor?  Again, I don't know, but since he did go to a wedding and encouraged the light hearted attitude that alcohol seems to bring out... I like to think so, but remember I am prejudiced towards him... but that's just me.
Email ThisBlogThis!Share to TwitterShare to FacebookShare to Pinterest


Gen 22:1 It happened after these things, that God tested Abraham, and said to him, "Abraham!" He said, "Here I am."
Gen 22:2 He said, "Now take your son, your only son, whom you love, even Isaac, and go into the land of Moriah. Offer him there for a burnt offering on one of the mountains which I will tell you of."
Gen 22:3 Abraham rose early in the morning, and saddled his donkey, and took two of his young men with him, and Isaac his son. He split the wood for the burnt offering, and rose up, and went to the place of which God had told him.
Gen 22:4 On the third day Abraham lifted up his eyes, and saw the place far off.
Gen 22:5 Abraham said to his young men, "Stay here with the donkey. The boy and I will go yonder. We will worship, and come back to you."
Gen 22:6 Abraham took the wood of the burnt offering and laid it on Isaac his son. He took in his hand the fire and the knife. They both went together.
Gen 22:7 Isaac spoke to Abraham his father, and said, "My father?" He said, "Here I am, my son." He said, "Here is the fire and the wood, but where is the lamb for a burnt offering?"
Gen 22:8 Abraham said, "God will provide himself the lamb for a burnt offering, my son." So they both went together.
Gen 22:9 They came to the place which God had told him of. Abraham built the altar there, and laid the wood in order, bound Isaac his son, and laid him on the altar, on the wood.
Gen 22:10 Abraham stretched forth his hand, and took the knife to kill his son.
Gen 22:11 The angel of Yahweh called to him out of the sky, and said, "Abraham, Abraham!" He said, "Here I am."
Gen 22:12 He said, "Don't lay your hand on the boy, neither do anything to him. For now I know that you fear God, seeing you have not withheld your son, your only son, from me."
Gen 22:13 Abraham lifted up his eyes, and looked, and saw that behind him was a ram caught in the thicket by his horns. Abraham went and took the ram, and offered him up for a burnt offering instead of his son.
Gen 22:14 Abraham called the name of that place Yahweh Will Provide. As it is said to this day, "On Yahweh's mountain, it will be provided."
Gen 22:15 The angel of Yahweh called to Abraham a second time out of the sky,
Gen 22:16 and said, "I have sworn by myself, says Yahweh, because you have done this thing, and have not withheld your son, your only son,
Gen 22:17 that I will bless you greatly, and I will multiply your seed greatly like the stars of the heavens, and like the sand which is on the seashore. Your seed will possess the gate of his enemies.
Gen 22:18 In your seed will all the nations of the earth be blessed, because you have obeyed my voice."
Gen 22:19 So Abraham returned to his young men, and they rose up and went together to Beersheba. Abraham lived at Beersheba.
Gen 22:20 It happened after these things, that it was told Abraham, saying, "Behold, Milcah, she also has borne children to your brother Nahor:
Gen 22:21 Uz his firstborn, Buz his brother, Kemuel the father of Aram,
Gen 22:22 Chesed, Hazo, Pildash, Jidlaph, and Bethuel."
Gen 22:23 Bethuel became the father of Rebekah. These eight Milcah bore to Nahor, Abraham's brother.
Gen 22:24 His concubine, whose name was Reumah, also bore Tebah, Gaham, Tahash, and Maacah.

Are you an apatheist? by Mark Copeland

http://executableoutlines.com/top/apathy.htm
This is a new term for me; interesting!!!... Gary
Email ThisBlogThis!Share to TwitterShare to FacebookShare to Pinterest
Newer Posts Older Posts Home
Subscribe to: Posts (Atom)