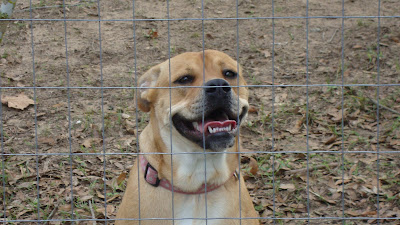 This dog's name is Sandy and she is not like her appearance. When she is around family she is the gentlest animal I have ever seen. She can't seem to get enough affection. However, if you are a stranger, BEWARE! When she shows her teeth she isn't kidding. So, what is her value to the family?


To the Philistine, Goliath, dogs weren't worth very much. That is why he talked this way to David. Later, he learned what a mere boy with sticks and stones could do and it cost him his very life. So, I guess the moral of all this is to say that things we value lightly can be of great value if used correctly. Even a dog has value, if there is enough love to motivate it. Believe you me, Sandy is motivated!
Email ThisBlogThis!Share to TwitterShare to FacebookShare to Pinterest
Newer Posts Older Posts Home
Subscribe to: Posts (Atom)