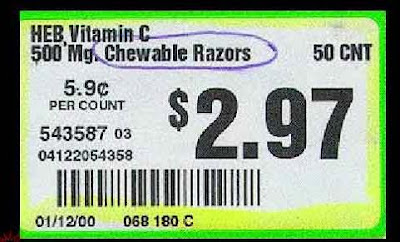 Somebody goofed! Chewable razors? Well, mistakes happen and I am sure someone was told about this little mix up! Even though it says "chewable razors" I am sure nobody would confuse vitamin C with razors; they are just too different! However, some people who don't read signs very carefully could reasonably expect to do a double take. But what if the differences don't seem to be so clear, say in the normal way your culture acts compared to the way Christians are supposed to act? Almost by definition we think of the church in Corinth. What a mess, but Paul still loved them and wrote 1 Corinthians to encourage and exhort them to "do the right thing". Paul says...


1 Corinthians 6:7-11 WEB (R)
(7) Therefore it is already altogether a defect in you, that you have lawsuits one with another. Why not rather be wronged? Why not rather be defrauded?
(8) No, but you yourselves do wrong, and defraud, and that against your brothers.
(9) Or don't you know that the unrighteous will not inherit the Kingdom of God? Don't be deceived. Neither the sexually immoral, nor idolaters, nor adulterers, nor male prostitutes, nor homosexuals,
(10) nor thieves, nor covetous, nor drunkards, nor slanderers, nor extortioners, will inherit the Kingdom of God.
(11) Such were some of you, but you were washed. But you were sanctified. But you were justified in the name of the Lord Jesus, and in the Spirit of our God.


Would you want to go there after reading this? Probably not!!! But they had something going for them; they could and did listen to Paul. They changed and if they could, so can we. Don't be deceived by the world around you; be different, live up to the high standards God has set for you. Be a sign to the world that does not deceive and just says sanctified (set apart for holy purposes) and justified (clean as if you had never, ever sinned)! One more thing... don't look for razors in the vitamin isle!!!
Email ThisBlogThis!Share to TwitterShare to FacebookShare to Pinterest
Newer Posts Older Posts Home
Subscribe to: Posts (Atom)